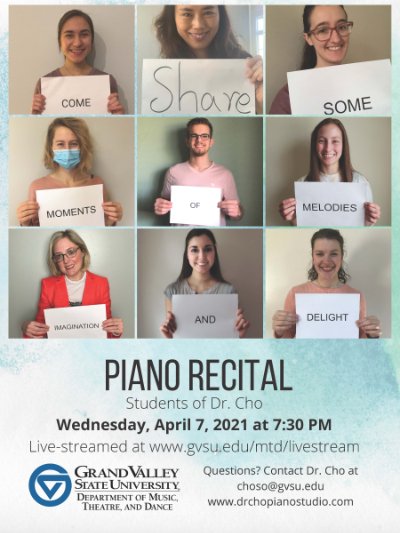 Free to attend, the concert can be found on GVSU’s website on Wednesday, April 7 at 7:30 p.m.

Over the course of an hour and a half, nine GVSU students from the class will perform a variety of songs, some of which are: Ravel’s Sonatine, mvt. I, Chopin’s Ballade No. 3, and Beethoven’s Appassionata Sonata, mvt. I.

Cho said per usual for these concerts, the music selection will be diverse.

“Each student and I select music together each semester according to their level and interest,” Cho said. “Each semester, everyone works on different music, so the studio recitals tend to feature a wide range of repertoire every semester.”

The student pianists will be performing solo pieces for the concert, with the exception of a couple of ensemble pieces.

However, since the ensemble groups could not meet in person to play together, the pieces were pre-recorded separately. Those videos will be combined to create the ensemble pieces for the night.

First-year GVSU student and music major Lydia Seaver is performing two pieces composed by Chopin for the recital. She said the main difference between this concert and the last are the composers of her pieces, as during the last recital, she performed two pieces by different composers.

Given that Seaver is a first-year student, her only experiences with university piano concerts came from last semester’s virtual recital, which was pre-recorded. This semester, it was decided that the recital would be live-streamed, and she said she is looking forward to the change.

“I am excited about this performance as it will be live-streamed, and this will be a new experience,” said Seaver.

Since last semester’s recital was pre-recorded, there weren’t any safety precautions that needed to be put into place.

Cho said they are taking strict measures to ensure the safety of everyone for this live-streamed performance. The piano keys will be sanitized between each student’s performance and every student will have their own space to warm-up prior to the recital.

Seaver said she is most looking forward to the live aspect of the performance.

“It makes things feel as if they are a bit more normal,” Seaver said. “Last semester with the pieces being pre-recorded, the recital did not feel as connected, but the live stream allows it to have the sense of us playing together.”

Cho said that her students are very excited to put on this concert and she is most looking forward to everyone gathering together to watch their classmates play.

“We are grateful for the opportunity to play a concert,” Cho said. “Hopefully many will tune in.”