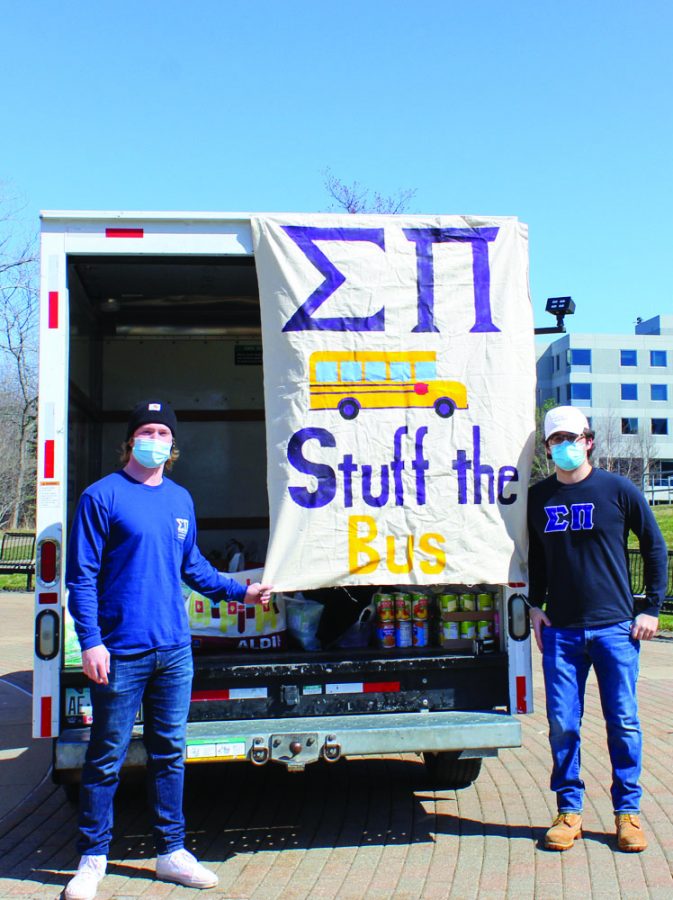 All the donatioins were given to the Replenish food pantry on campus. (GVL / Annabelle Robinson)

In a time of financial hardships, Sigma Pi Fraternity at Grand Valley State University decided to help brighten others’ days through their “Stuff the Bus” charity event. They hope to make a positive change in their community and thought donating food to those struggling would be the perfect opportunity.

Stuff the Bus was held Friday, Apr. 2, from 10 a.m. to 4 p.m. at the Cook Carillon Clock Tower, just outside of the Kirkhof Center on GVSU’s Allendale campus. Altruistic Campus Experience Chair Brenden Cotter, along with co-chair Jack Fowler and Vice President Alex Stulberg came up with this moving idea.

When looking to further their impact, they realized there was a need right on their campus. They saw how some students did not know where their next meal was coming from. So they decided to provide as much food during the event as possible to help these students.

“We reached out to both Kirkhof and Replenish to make sure they wanted to work with us and they both agreed,” Cotter said. “From there, we informed other Greek organizations about the event to spread awareness.”

When they heard about the Stuff the Bus event Sigma Pi was hosting, they knew they had to join in.

Sigma Pi fraternity members, the staff at Kirkoff Center and Replenish all chipped in to try and contribute the most they possibly could.

“Anyone who wanted to helped out,” Cotter said. “There was also heavy involvement from Greek Life.”

The Sigma Pi fraternity looks to promote scholarship, culture, and chivalry, as well as building character and developing lifelong bonds, goals they seek to accomplish through their collaboration on activities and events. Through their commitment and connections, Sigma Pi Fraternity is able to reach out and impact the lives of others.

All the proceeds collected went directly to Replenish in order to make sure their stock was overflowing with a variety of different food items to choose from.

Sigma Pi Fraternity asked participants to bring any food item that has a long shelf life and does not need to be refrigerated.

Sigma Pi Fraternity had a grand total of 804 items, with Alpha Omicron Pi donating the most out of any organization with 153. They won $100 for their philanthropy.

“The greater impact to see is to help Replenish build high quantities of food and supplies to last as long as possible,” said Cotter.