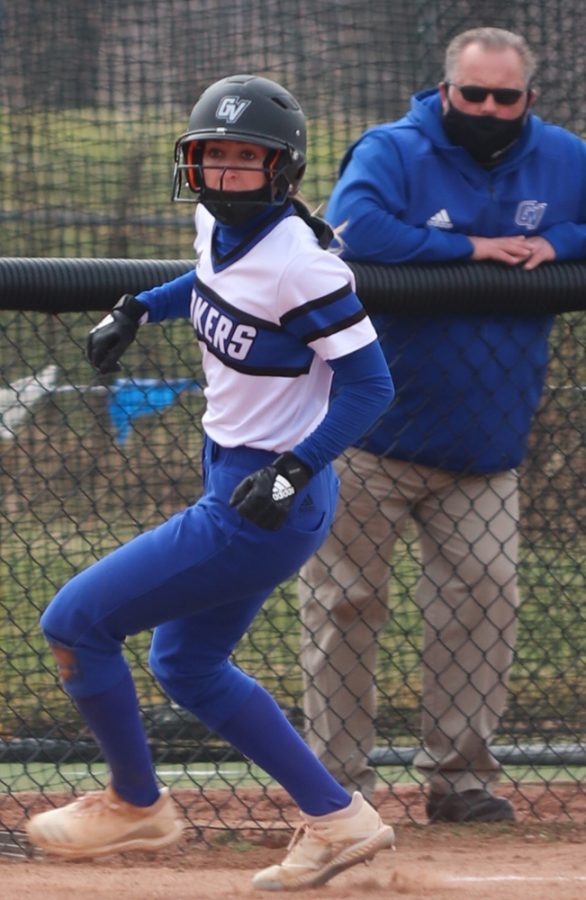 The Grand Valley State University softball team split their doubleheader on March 30 against Wayne State University. The Lakers started off with a great start, winning game one 8-0 but then lost the second game 4-0.

In game one, the Lakers were hitting extremely well. In the first inning, junior IF Taylor Rieger started off with a single to get the Lakers on base. Junior UT Brooke Henning then drove in a run with a single and the Lakers would take a 1-0 lead.

The game would then break open in the fourth inning as the Lakers were swinging the hot bats. A single by freshman OF Hannah Hollister followed by another single from Henning would put two on base for the Lakers. Sophomore C Morgan Wagner then bunted down the right foul line to load the bases with no outs in the inning. Junior IF Bailey Thatcher then recorded a two-run single followed by a two-run triple to right field by freshman IF Megan Koenigshof. Rieger would then record her second hit of the game with an RBI single to center field, giving the Lakers a 6-0 lead. The team recorded five runs and six hits in the inning, but the Lakers weren’t done just yet.

In the sixth inning, sophomore OF Joanna Cirrincione doubled down the infield line. Rieger would then get on base after a fielding error by Wayne State followed by a Goble two-run double to end the game due to the mercy rule with a thrashing 8-0 victory. Every batter for GVSU was able to record a hit.

“We’ve been working on it a lot here lately,” Thatcher said. “Our at-bats have been more on the quality side and we’re not trying to overdue anything. Everything has been a big team effort and it’s not just coming from one side of the lineup which is really nice to see.”

The pitching was key for the Lakers game one victory as redshirt sophomore Hannah Beatus had a dominant performance. Beatus recorded her seventh complete game on the season posting no earned runs, three hits and two strikeouts.

After a dominant game one performance, Laker fans were looking for the sweep in game two, but the Wayne State Warriors had different plans. To start the game, the Warriors recorded a line-drive RBI triple to center field, giving them a 1-0 in the first inning.

In the third inning, Wayne State would open up with a double to left field followed by a home run. The Warriors would take a 3-0 lead, with still plenty of time left for a Lakers comeback. Koenigshof would record a single but wasn’t able to record a run. Going into the fifth inning, the Lakers made a pitching change and put in Samantha Gerhls to try and stop the bleeding. The change looked to be a good one but with two outs in the inning, Wayne State tripled to right field followed by an RBI double to left field extending the Warriors lead 4-0. The Lakers tried to get on the board with hits from Cirrincione and Goble in the sixth inning but would fail to bring in a run. In the bottom of the seventh inning, the Lakers would end up losing game two of the doubleheader, 4-0.

“We wanted to be aggressive on the good pitches in the first game,” said coach Dana Callihan. “We did that, and we found some holes. Second game I think we chased a few and let the Wyane State pitcher control the at-bats a little bit more. She was throwing the ball a little lower and we just need to be a little more disciplined in the strike zone in that regard and make some adjustments. When she does come up in zone, we need to jump on that.”

The Lakers lost their first game in their GLIAC schedule and will look to bounce back heading into conference play this weekend against Ashland University.