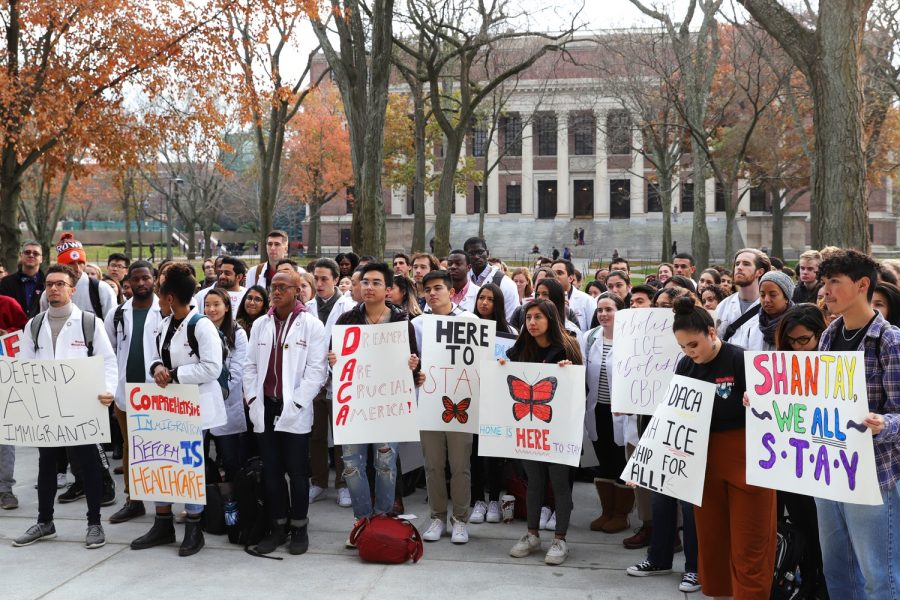 Trump's 2017 decision to end the DACA program led to mass protests across the country, including many universities. (Courtesy Kathryn S. Kuhar via The Harvard Crimson)

Last week, Grand Valley State University’s Office of Multicultural Affairs hosted their “UndocuWeek,” three days dedicated to programming that acknowledges, supports and uplifts those living with undocumented or DACA (Deferred Action for Childhood Arrivals) status. The culminating event on Wednesday, April 7 was a panel from the Michigan Network of Undocumented Immigrant Success, an organization formed over the pandemic by young professionals who used to organize similar programming when they attended Grand Rapids Community College.

“My parents were like, don’t talk about it, don’t talk about it, so it was difficult for me to reach out to my community college for help,” said Kevin Vazquez, an Administrative Aide in Oversight and Public Accountability for the City of Grand Rapids. “But when I was attending GRCC, they put on a presentation about undocumented experiences, and afterwards I reached out to the presenter. I could tell that he was really willing to help people, and that experience helped me a lot.”

Vazquez spent much of his time getting his bachelor’s flying back and forth between school and Washington D.C., where he advocated for himself and other DACA recipients when Donald Trump moved to end the program— and the legal protections it gave immigrants who came to the United States as children—  in 2017. In June 2020, the Supreme Court voted to block the Trump administration’s attempt to revoke it. In addition to this advocacy, Vazquez worked with his peers at GRCC to create student-led programming on undocumented issues.

“When we were at GRCC, we would present monthly workshops on the issues undocumented students faced on campus— but then we went off to different colleges,” said Juan Mascorro-Guerrero, a GVSU alumnus and current Human Resources Partner at the University of Chicago. “During the pandemic, however, we decided to create a safe space where undocumented people could share knowledge, methods, and assistance which each other.”

“I remember I was taking minutes in a meeting when Trump’s threat against DACA was fulfilled in 2017, and I just wanted to break down crying,” Hernández Cano said. “But nobody knew. When I eventually told some of my coworkers about my status, it brought us closer. That’s something that’s motivated me to, not necessarily tell everyone who I am, but to not be so afraid of being myself.”

All three panelists discussed what it was like to have DACA status in the workplace. In basic terms, being a DACA “Dreamer” means that you can request to “defer removal action” (being deported) for two years, which can be renewed repeatedly. Dreamers are also eligible for work permits, unlike other undocumented immigrants. However, DACA status is not equivalent to legal citizenship status; for example, despite collectively paying $60 billion in taxes every year, DACA recipients are unable to vote.

“I’m a very open person, so I share my status with my colleagues,” Mascorro-Guerrero said. “The most common thing they ask me is, why haven’t I become a U.S. citizen yet? I get asked this all the time. There’s a simple answer: there is no current path to citizenship for those with DACA status.”

Vazquez also observed a general misunderstanding of what DACA meant in his workplaces. He noted that over the years, he’s had several different human resource departments not understand how to fill out his renewal papers, forcing him to help and do it for them. All three panelists agreed, however, that while the media and politicians tend to focus on DACA, other undocumented immigrants tend to fall to the wayside.

“Being a DACA recipient, I have a lot of privilege,” Mascorro-Guerrero said. “I can drive, I can have work permits. One of the things we try to do in MNUIS is not just work with DACA students, but work with people who don’t have DACA status to help them find work opportunities and community support as well.”

GVSU advises undocumented students to seek the institutional grant assistance that’s available to all GVSU applicants, as Federal & State financial aid sources require recipients to be U.S. citizens. However, the MNUIS panelists encourage members of the GVSU community to advocate for better support for undocumented immigrants.

“If you’re able to vote, vote for policies that support the undocumented community, encourage your senators to vote for positive immigration policies,” Mascorro-Guerrero said. “If you are a student, students have the power. If you want something, you can work towards it, and you can achieve it. You can demand that GVSU become a sanctuary campus. And the best thing you can do is educate yourself, and then check up on your undocumented communities.”

Those looking for support themselves or need help navigating GVSU’s resources can reach out to Adriana Almanza, the OMA’s advisor for Undocumented/DACA Student Resources, at [email protected] If you’re interested in seeing more from MNUIS, you can find them as @michnuis on Instagram.