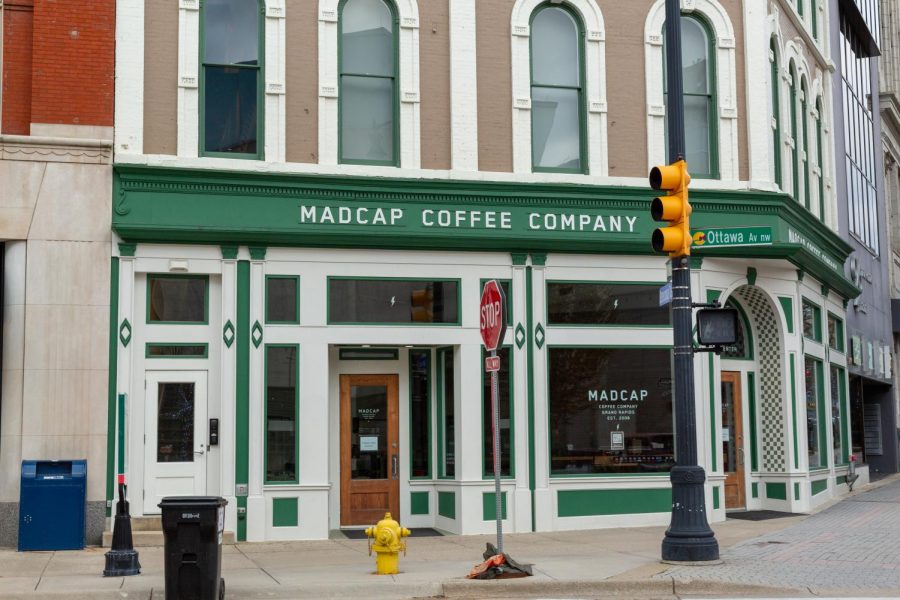 The Seidman College of Business hosted a Focused Learning Lab on Wednesday, April 14 titled “How Madcap Coffee Has Thrived Despite the Pandemic.” The event featured Madcap Co-Founder and Co-CEO Trevor Corlett, who discussed the difficulties that his team has faced over the last year and how they have altered business strategies in new and unexpected ways to keep the Grand Rapids coffee shop afloat.

Traditionally, Madcap has operated much differently than a typical coffee shop business. Instead of buying coffee from wholesalers or other suppliers, Madcap is directly involved with the importing of carefully-selected coffee from growers overseas. They also act as a wholesaler and sell their product to restaurants, coffee shops and other retail locations.

“Folks in Grand Rapids, most of their experience with Madcap seems to be just with our cafes and they think we’re strictly a retail company,” Corlett said. “In actuality, our coffee is involved at every level of the coffee value stream.”

The bulk of Madcap’s revenue used to come from its wholesale deals, but that has shifted over the last year. As restaurants and coffee shops closed their doors to comply with health safety protocols, the wholesale demand for Madcap’s coffee dwindled.

“Two-thirds of our revenue was in wholesale distribution to other businesses, and almost overnight we lost about 80% of that business,” said Corlett.

Even though local eateries were closed, customers’ demand for Madcap’s coffee never faltered. Madcap sells pre-packaged coffee through their website, and customers quickly turned to the internet to fulfill their coffee needs.

“About 5% of our revenue pre-COVID was online, direct-to-consumer,” Corlett said. “Last April when COVID was in full force, our online sales skyrocketed 200%.”

Corlett also mentioned that roasting coffee at home actually saves customers money, as the cost of a cup of coffee goes from $3-5 at a cafe to around 40 cents at home.

Madcap currently operates three cafes in Michigan; two are in Grand Rapids and the third was recently opened in Detroit. At the start of the COVID-19 pandemic, another cafe was located in the Downtown Market in Grand Rapids, but that location is now permanently closed. Corlett said that unfortunate lease renewal timing was the major reason for the closure.

“We had just finished our three-year lease there and we were in the middle of lease negotiations, and we had never really made money there,” Corlett said. “That location was always a break-even location for us and was really more of a marketing tool because it had a completely different customer base than what we would get at our other locations.”

Madcap also experienced layoffs for the first time in the company’s history. Forty-three out of 59 staff members were let go from their positions, and those that kept their jobs had to step out of their comfort zones to keep the company running as smoothly as possible.

“The HR manager, director of operations, chief marketing officer – at one point, all these individuals were in our warehouse packaging coffee, packing boxes, and putting labels on bags,” Corlett said. “We had people doing everything to keep our product going out the door to the customers who needed it most.”

As the business has grown over the last few months, Madcap has been able to rebuild its staff and the team is back up to around 40 members. This includes the addition of a brand new position that will help sustain and grow the online part of Madcap’s sales.

“We added a dedicated e-commerce manager, which we never had previously,” Corlett said. “As you can imagine, for a company that does everything from start to finish through the value chain, our margins are great direct-to-consumer, so we want to keep that business.”

Madcap’s grit and adaptability throughout the COVID-19 pandemic have paved the way for an exciting future for the company. Grit was the main theme of Corlett’s presentation, and it’s one of the things that he thinks makes Madcap so special.

“We want to hire people with grit,” Corlett said. “Grit is one of those things we saw in the last year with the pandemic that was invaluable for us. You want to work with someone who’s got your back and is going to have that grit.”

More information about Madcap can be found at www.madcapcoffee.com.