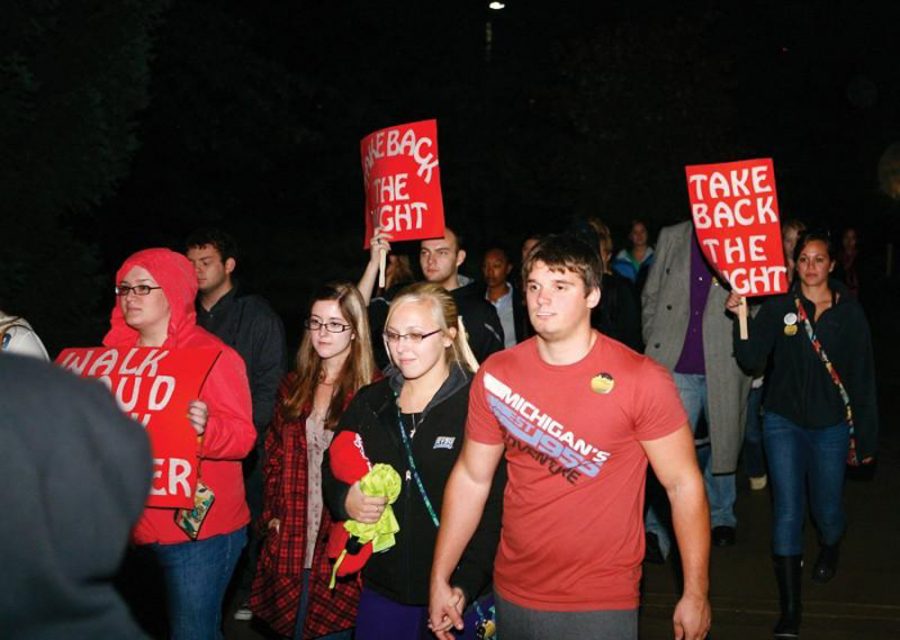 April is nationally recognized as Sexual Assault Awareness Month. To raise awareness and support survivors, the Grand Valley State University Center for Women and Gender Equity (GVCWGE) has paired with the Campus Activity Board (CAB) to host a series of events titled “Take Back the Night.”

“Take Back the Night” is a series that has been hosted across college campuses for decades. Though GVSU was not able to host their event last year due to the pandemic, they are bringing it back this year with full force.

This year’s “Take Back the Night” series consists of six different workshops throughout the first two weeks of April. The six workshops are “Identifying Red Flags,” “Art Therapy,” “Leading with Empathy,” “Reclaiming Consent,” “Supporting Victims/Survivors,” and finally “Trauma-Informed Yoga.” There is also a keynote event to close out the series on April 14.

This series focuses on not only sexual assault survivors, but survivors of other types of relationship or partner abuse. The goal is to show survivors that they are supported by the people around them.

“We want victims/survivors to know that there is a community on campus that is survivor-centered and will believe them,” said Leah Short, violence prevention and education coordinator at GVCWGE. “That is something we hope these events convey is that healing is not linear and some healing spaces may be helpful for some, but some spaces might not feel right for everyone.“

The GVCWGE and CAB also paired together to give away survivor supporter bags. There were 200 bags containing materials to write letters to survivors and “Believe Survivors” sweatshirts for the GVSU community.

“We were meant to pass out the bags all last week however, thanks to so many wonderful GV students, the bags and sweatshirts were all gone by Tuesday,” said Alyson Zduncyzk, Student Senator and Greek Life Representative.

The events were such a success this year that the organizing committee is intending to create a student organization to organize survivor advocacy events years round, not just during Sexual Assault Awareness Month.

“We want to create a campus where victims/survivors are heard, believed, and supported,” Short said. “We also hope that those who have the privilege to ignore the problems that gender-based violence causes are more motivated to start paying attention. This violence impacts all of us, and it will take us all to unlearn and heal together.”

They intend for the advocacy group to form for the fall semester and hope to start hosting events for the upcoming school year.