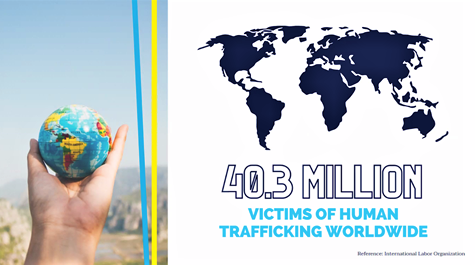 In the United States alone, 22,326 victims and survivors of human trafficking were identified in 2019. (Courtesy Neal Lofy)

Human trafficking is estimated to affect 40.3 million people worldwide, according to the International Labor Organization. Investigator Neal Lofy, an FBI-recognized police detective in the Special Investigations Unit of the Racine Police Department in Wisconsin, was invited by the Hospitality and Tourism Management Club at GVSU to lead a discussion and presentation focused on human trafficking in hospitality.

“The basic principle we are going to talk about today is what exactly is human trafficking?” said Lofy. “How does it impact our life, what does it look like, how can we see it, and, ultimately, what can we do about it?”

The topic of human trafficking is important to discuss, both in terms of prevention and education. In 2012, Lofy helped to start a non-profit organization dedicated to helping victims of human trafficking in Wisconsin, called Fight to End Exploitation. His experience in the topic has arisen from his law experience and his contributions to the organization these past 9 years.

“Fight to End Exploitation is a non-profit whose missions are to educate, to create public awareness, and most importantly to advocate for victims of human trafficking,” he said.

The first step to prevention is education and being honest about the current numbers that exist in relation to human trafficking.

“In the end, I think this number is really, really low,” said Lofy. “In any given year, I myself work with roughly 50 human trafficking victims. And I am only one person, in my day job of law enforcement.”

Investigator Lofy’s presentation focused specifically on labor and sex trafficking, within the United States and in our own states and communities. There are many important elements to understand about human trafficking, from common signs, typical locations where trafficking happens or starts, and the psychology of why victims stay. Included in that understanding, is how human trafficking can happen and how international consumerism impacts the areas involved in human trafficking.

“Unfortunately, exploitation is in almost everything we use,” said Lofy. “It is in our clothes, diamonds, coffee, tea, chocolate, fishing, and the industries that provide a lot of what we use on a daily basis like technology. This isn’t to scare you against buying these products, but to bring awareness about how people within our own communities are being exploited not just at an international level but in our backyard.”

For those interested in learning more, Fight to End Exploitation offers educational services and resources at fighttoendexploitation.org. The fight against human trafficking begins with each new person dedicated to spreading awareness and making a difference in their own communities. Lofy stressed that although human trafficking might seem unstoppable, the United States has continued to see a positive increase in the number of victims helped.

“The good news is that there has been an increase of direct contact with victims and survivors since 2015,” he said. According to the Polaris Project, that number has risen to 4,312 people in 2019, a 19% increase from the 3,625 the year before that.

One step at a time, we as a community and a nation can take steps forward to help those in need and educate one another on the importance of being aware of what goes on around us every day. Prevention begins with learning.