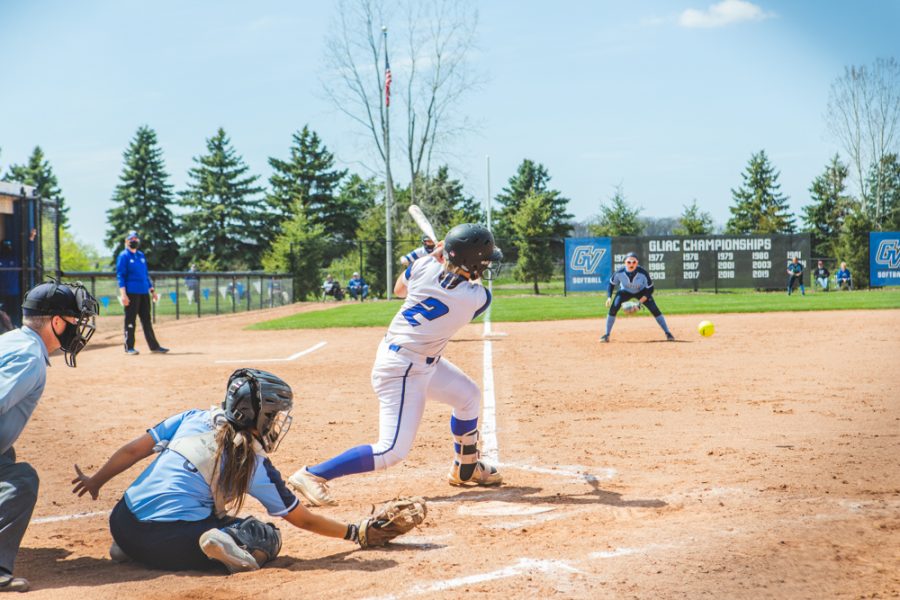 Redshirt sophomore Hannah Beatus pitched lights out for the Grand Valley State University women’s softball team (26-6) in game one of the series against Northwood University (18-9). Beatus has put together a strong season so far, boasting a 12-1 record for the Lakers, along with a 1.05 ERA. Coach Dana Callihan was pleased with her ace pitcher after pitching a complete game and winning their first matchup against the Wolves.

“She’s our leader on the field,” Callihan said. “We got her some runs early so that always gives you a little more confidence. She did what she’s always done for us, and we just helped her with the bats.”

Beatus received help from the offense in the first inning, as the Lakers came out hot, scoring an immediate four runs with hits from sophomore Lydia Goble and a home run shot from junior Nikoma Holmen. Beatus kept the Wolves off the board, holding a no-hitter until the fifth inning when two shallow singles dropped just out of reach of the Laker outfielders. Beatus shook it off quickly and left them hanging on base, not allowing the Wolves to score.

The Lakers then scored one more run in the bottom of the sixth inning with a hit from junior Bailey Thatcher to finish out the 5-0 win for the Lakers.

After the complete game and shutout, Beatus felt good about the atmosphere for the Lakers coming into game one of the weekend.

“The weather was so nice; it was definitely a change from when we played them the last time,” Beatus said. “It was about 30 (degrees) and snowing at times. We were just excited to come out and play today and had a good feeling about the weather. We were able to make the adjustments we needed to in game one to come out on top.”

Coach Callihan preached adjustments to her team all day. While the Lakers were able to make them in game one efficiently, game two didn’t go their way as they dropped the second to the Wolves 6-2, with freshman Genesis Eggart receiving the first loss of her career in the circle.

“They threw their better pitcher the second game,” Callihan said. “She threw a different game than what we expected, as far as what she has thrown in the past, and we just didn’t adjust to that very well. This is a fickle game; you play well in one game; you may not be in the next one, one at-bat can go completely different from the next. You’ve got to be ready for anything and have the adversity to bounce back; that’s just the nature of the game.”

Although the Lakers had eight hits in game two, they could not gather more than two runs off Lydia Goble’s double in the bottom of the fifth. Game two was finished off with two hits from sophomore Morgan Wagner, two hits from freshman Megan Koenigshof, and a hit each from sophomores Joanna Cirrincione and Lydia Goble.

The Lakers return to play with a doubleheader against Saginaw Valley State University on Wednesday, April 21, in their second round of GLIAC play before the GLIAC tournament, hoping to continue their impressive season so far.