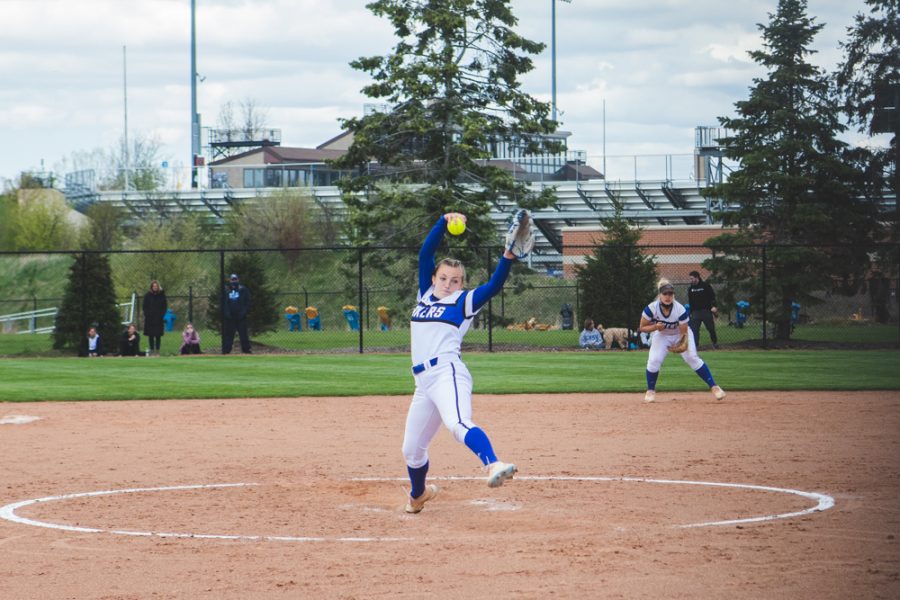 GVSU punched their way into the College World Series after a shutout win against Indianapolis. GVL / Sheila Babbitt

The No. 13 Grand Valley State University women’s softball team successfully made it to the College World Series this past weekend in a tense double-header against the No. 7 University of Indianapolis Greyhounds. After two shutouts in a row against Trevecca Nazarene University and Indianapolis, GVSU needed just one win Saturday, May 22 to grant themselves a ticket to Denver, CO this upcoming week.

Saturday began with a chance for the Lakers to sweep the Greyhounds, but Indianapolis put up a good fight in game one. The Lakers started the second inning off strong, putting the first point up on the board with a hit by junior infielder Nikoma Holmen. The Greyhounds came back even stronger with four points in the bottom of the second inning.

“We made a couple mistakes, we let some things get away from us and we let some things snowball a little bit in one inning essentially,” said coach Dana Callihan. “That was it and we couldn’t get the bats going enough to come back.”

After a tough second inning, the Lakers were down by three until the top of the sixth when Holmen hit a beautiful home fun into left field, bringing the Lakers up to 3-4. Unfortunately, after a fourteen-game win streak for the Lakers, they were unable to retake the lead by the seventh inning.

“We had a choice: we could either keep focusing on that one bad inning, or we could go and get the next one,” said sophomore pitcher Hannah Beatus.

With one more chance, the Lakers came out swinging in their next game. In the first inning, sophomore outfielder Joanna Cirrincione got a base hit, followed by another hit from Holmen, allowing Cirrincione to put the first point up on the scoreboard. By the third inning, Holmen struck her second home run of the day and put up another three points for the Lakers, ending the third inning with a score of 4-0.

The Lakers finished their shutout game with another hit by Holmen, followed by freshman outfielder Hannah Hollister which sent junior infielder Taylor Rieger home. The final score ended at 5-0 in a victorious strikeout by Beatus as the Lakers threw their gloves and helmets and stormed home base.

“Anytime we play a team like this, you’ve got to be ready,” Callihan said. “For us to actually shut them out once was unbelievable, quite honestly. For Hannah to come back from a loss and to be able to do it again– just superb mental toughness and superb leadership on her part, and the team followed suit.”

After a difficult first game, the Lakers earned their place in the College World Series with their fifteenth shutout game of the season and an overall record of 44-8. During an especially tough year, their teamwork and determination got them the NCAA Division II Midwest Region Championship title.

“We had to do it the hard way,” Callihan said. “I am so proud of this team and we have faced so much adversity. These guys have just been accepting of whatever we had to do.”

Both Holmen and Beatus exceptional play on Saturday wasn’t only a display of their incredible teamwork, but a tribute to the strength of their team throughout the COVID-19 pandemic this season. One of the biggest motivators for the team was the energy coming from the dugout.

“Energy is everything,” Holmen said. “Every team we’ve played here has had extreme energy and we just have to come back and have even more, and that’s what happens when we do.”

After a quiet first game, the Lakers came out making some serious noise in game two. Their trouble in the first game was nowhere to be found by the time Holmen hit her second home run of the day.

“We worked on our discipline and we let that slip away from us in the first game, and they got the advantage on that,” Callihan said. “So that was one thing that we talked about; that we had better pitch selection and that we took care of the ball on defense, and then we just put it in Hannah’s hands and let her go to work.”

Beatus’ perfect second game earned her an All-American status as of Tuesday, May 25, but she couldn’t have done it without her team and catcher, sophomore Morgan Wagner.

“We always have the attitude that we want to come out on top, and we didn’t get the job done the second time that we played them,” Beatus said. “We used that as fuel to get this third one. It doesn’t matter. We’ll play you nine times, ten times, however many times we have to.”

On Thursday, May 27, the Lakers will face the No. 12 West Texas A&M University in the first round of the College World Series to advance to round two on Friday, May 28.