Reviving the 2014 aesthetic less than a decade later 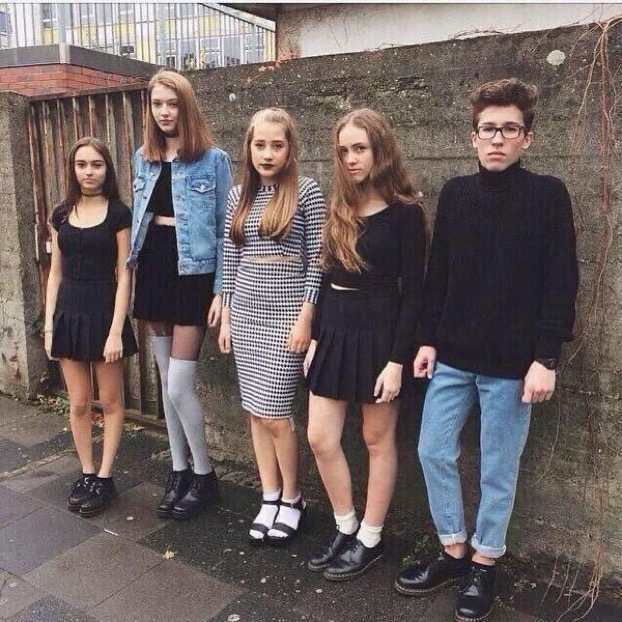 As I set foot into Forever 21 last week, I was hit with a wave of nostalgia as the mannequins were dressed straight out of a grainy Polaroid from 2014: tennis skirts, meticulously distressed band tees, knock-off Dr. Martens and all.  The racks were lined with red and black flannels layered over cropped, bleached tank tops harboring “edgy” phrases that could’ve been created through a Tumblr buzzword generator.

I was almost overwhelmed at the sight of the store, wondering how these trends and styles were already back not even ten years later than their original popularity.  It felt wrong to contemplate trying one of the outfits advertised at my current age of 22, considering the last time I wore something even relatively close to that style was when I was a sophomore in high school.

As COVID-19 brought the world to a stop just before my senior year of college began, I personally found myself resorting to certain pieces of pop culture for a sense of comfort and a reminder of a simpler time in my life.

I searched “2014 Tumblr aesthetic” on Pinterest to admire the collective obsession with boxed water, succulents, oil slicks in the street, and romanization of cigarettes; all toned down and distorted by pre-made filters on VSCO.  I tore through my vinyl collection in search of artists who peaked at that time: Arctic Monkeys, The 1975, Halsey, Lana Del Rey, The Neighbourhood, the list goes on and on.  Soon enough, it felt like all of Twitter and TikTok were on the same nostalgia train, posting about how they too were longing for a time full of teenage angst minus any “real” responsibilities.

Now that the world is beginning to open back up and these trends are being brought back in the mainstream before they even had a considerable amount of time to be missed, it begged the following questions: did other people in my small town have a shared experience of this time period, what were their biggest influences/interests in this era, and would they like to relive 2014 in their twenties?  I took to my Instagram story to post polls regarding those questions and watched the results, mainly from other GVSUstudents, roll in.

Much of my curiosity stemmed from wondering how others memorialized 2014 pop culture. When I uploaded an open question box containing the phrase, “when I think of 2014, I think of _____”, I was met with a copious amount of responses.

Out of the 76 participants, 65% listed off at least three of the aforementioned musicians, and 87% made sure Tumblr was referenced as well.  The brand American Apparel was the most common response in terms of fashion, which makes sense as their legacy is forever immortalized in the song “She Looks so Perfect” by Australian pop band 5 Seconds of Summer; which peaked at #14 on the Billboard charts in 2014.  Other honorable mentions of 2014 greats were 8Tracks (an app used to create themed playlists), TV shows Supernatural and Sherlock, and the importance of having a cohesive Instagram feed.

Along with this fill-in-the-blank question came a typical, three-option poll asking followers which field of pop culture had the most influence as a whole: fashion, music, or Tumblr.  Out of the 241 interactions, Tumblr unsurprisingly beat out its competitors with 60% votes.

As for whether or not other people my age would welcome and allow this time of adolescence to interfere with their adulthood, I received a relatively even split, with 113 votes for “yes” and 96 for “no”.  The observation that trend cycles are shortening has been a common topic of discussion online recently, and I think that walk into Forever 21 really put that thought in motion for me.

Numerous people messaged me privately to mention this, saying that if they weren’t quarantined in their childhood homes during one of the most existential parts of their lives up until this point, maybe this 2014 pop culture revival wouldn’t be happening so soon. Regardless of the reasoning for its return to the mainstream, I find it cathartic knowing that so many others experienced that time of growth, development, and adolescence beside me, even if I didn’t know it at the time.