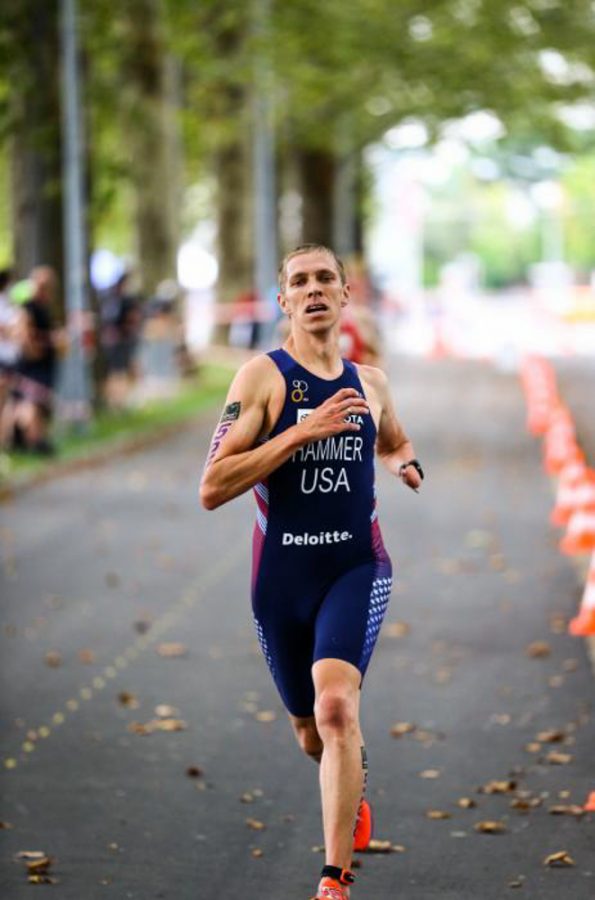 The 2020 Olympic Games have begun with the 2020 Paralympic Games right around the corner. Grand Valley State University alumnus, Chris Hammer, will once again compete for Team USA in the Paralympic Games.  Hammer, a 2009 graduate and five-time NCAA Division II Track All-American, will try and go for the gold medal in the Paratriathlon in August.

Hammer found a passion for running at a young age, but it wasn’t his first sport of choice.

“In high school my favorite sport was ice hockey,” Hammer said. “I played ice hockey all through senior year for a city league and actually won the state championship. I was all about it, but it was apparent that my challenge worked in distance running. If I was going to continue playing sports in college it was not going to be ice hockey, it was going to be running. I liked running, I liked the fact you could push yourself and it’s so simple. It’s basically you trying to beat someone else, and I liked that aspect of that.”

Hammer was born without a left hand, the result of a congenital condition, but he hasn’t let that slow him down at all.

“I never, ever considered myself to have a disability and never let it be an excuse for anything,” Hammer said. “Every sport I played was played just like a regular sport.”

Hammer also showed his hard work ethic each and every day whether it was at practice or at meets. He brought lots of energy and enthusiasm to the team and was a joy to have as a teammate.

“Chris is a very easygoing, great-spirited and very passionate person,” said GVSU track and field coach, Jerry Baltes. “His work ethic was top-notch as a Grand Valley student-athlete, and to this day, has done an incredible job of maximizing his talent and getting the most out of his God-given ability by working hard, staying fitted and disciplined in training and living the proper lifestyle to become one of the best in the world.”

Hammer’s journey to the Paralympics was different than others. He was first approached by a U.S. Paralympic coach at an indoor track invitational at the University of Washington when he was still a student at GVSU. The coach introduced the idea of the Paralympics to Hammer but it took some time for him to decide on what to do.

“I never heard of the Paralympics, so the only thing I could think of is Special Olympics and I was like, this doesn’t apply to me,” Hammer said. “I kind of blew it off at first and it actually took a decent amount of convincing from my teammates and coaches there, and they told me I should look into the opportunity more. It was something I was hesitant to pursue to begin with but then the more I learned, and I saw what a great opportunity it is to continue to be an athlete post-college and to represent your country at the world stage has been life changing.”

Since joining the U.S. Paralympics track and field team, Chris has participated in many events and made a name for himself on the national and world stage. In 2011, Hammer was the World Para Athletics (IPC) Champion in the 1,500m race. He then participated in his first Paralympic Games in London in 2012, where he ran the 1,500m and the Marathon. But Hammer wanted to go further and try a new challenge in 2013 and participate in the triathlon, which consists of three segments; a 750m swim, 20km bike and a 5km run. He didn’t have any swim or bike training prior to entering the race but felt his cross-country and long-distance running background would be well suited for a triathlon. Hammer has since received 12 World Triathlon Para Series medals and is also a three-time Paratriathlon American World Champion and three-time Paratriathlon National Champion. In Rio 2016, the paratriathlon was debuted in the Paralympic Games, in which he placed fourth.

“When I first got to Grand Valley, I wasn’t one of the most well-prepared, like I still ran in basketball shorts whereas everyone else had the short running shorts,” Hammer said. “I was kind of out of my element to begin with, but I had a passion for working hard and I loved the team and the culture. I went from being a decent high school athlete to being a five-time All-American during my time at Grand Valley. I learned what it’s like to train at a high level, good training plans, and so many things that were eye-opening to me.”

Hammer will be representing Team USA on the U.S. Paralympic Triathlon Team. With his hard work ethic and determination, Hammer will aim to become a gold medalist in the Tokyo 2020 Paralympic Games.

“He’ll be up there,” Baltes said. “I know he’s fit, he’s competitive and I know he’s tough and he’ll be mixing it up to get on the medal podium.”