Deanne Scanlon announces retirement, Jason Johnson steps in as third head coach in the history of the women’s volleyball program 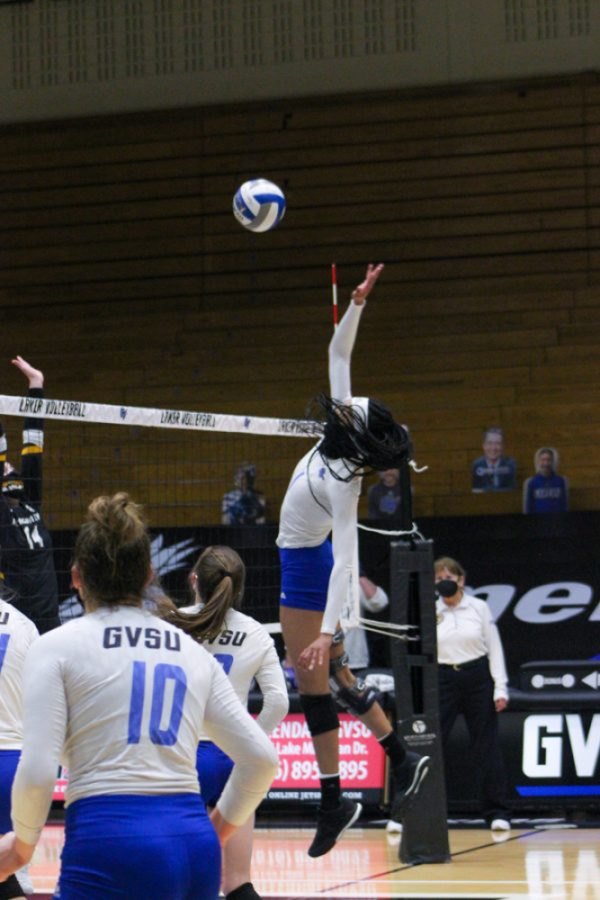 On Tuesday, July 27, 26-year head coach for the women’s volleyball team, Deanne Scanlon, announced her retirement. Scanlon leaves Grand Valley State University as the all-time winningest coach in the history of the program with an overall record of 615-225 and a legendary set of accomplishments over the course of her career.

Scanlon took the reins from GVSU Hall of Fame leader, Joan Boand, as the head coach of the volleyball team in 1995, and is now passing the torch to assistant coach, Jason Johnson, for the upcoming 2021 season. Scanlon’s career achievements started and ended with GVSU, totaling out to nine NCAA regional championships, a 2005 NCAA DII National Championship, 29 All-Americans, and a GLIAC record of 305-108. Although her impressive list of achievements will be a large part of what she’ll be remembered for at GVSU, her character and drive is what made her a legend in the program’s history.

Now, Coach Johnson, who has been working with Scanlon for 22 years—20 of those as the assistant coach for the women’s volleyball team—is stepping up to the plate.

“The one thing I will give a ton of credit to Coach Scanlon for is allowing me over the last 20 years to grow as a coach and turn more and more aspects of the program over,” Johnson said. “Early on it was about just learning what it meant to be a coach and a little self-discovery, and then the last 10 years it’s been about diving into the different aspects of the program.”

As the assistant coach for two decades, Johnson played a huge role in both the team’s successes and the player-to-coach relationships. Since the head coach is responsible for making decisions based on what’s best for the team, Johnson is going to have to start adapting to a new mindset in order to make the jump to head coach.

“I’m very close and very connected with our players,” Johnson said. “I think we have a very good relationship, but that dynamic will change a little bit because, again, it can’t just be me playing both sides where I’m advocating for the players and advocating for the team.”

With the start of the season just two weeks away, Johnson has been busy planning and preparing for an entirely different season than the one he’s been a part of for the last 20 years. Because of his hand in a lot of the decisions that made the team what it was for all that time, Johnson doesn’t foresee any large changes happening anytime soon. While a lot of coaches tend to create goals based on numbers and titles, Johnson is going to be using some of his experience as an assistant coach to gauge some new goals as a team.

“Getting through it,” Johnson laughed. “It’s easy to just throw out the measurable goals of winning things, but I think the biggest thing is we want to make it through; we want to be healthy both physically and emotionally. And then from there, it’s just about a relentless drive of competitiveness. I think we define competitiveness in the world as showing up and being better than the next person, and it needs to be redefined a little bit about just being better than yourself every day.”

With a little bit of an older team taking the court this season, Johnson believes that winning is going to be on their priority list first and foremost, but open lines of communication and community service are both factors in what he believes makes a great team.

“I am so confident and ecstatic that he’s got this position,” Scanlon said. “He couldn’t be more ready, he has put in his time, he’s been devoted, loyal, and he’s more ready than a lot of people I know that have been head coaches for a long time. I think he’s going to hit the ground running and I don’t think they’re going to skip a beat.”

With the season opener taking place in Colorado to play the University of Sioux Falls on Sept. 3, the new coaching staff has a lot to do before the athletes come back to Allendale to start practices up again. The NCAA released the schedule for the 2021 season back in June, and they’ll have their work cut out for them starting with the Colorado School of Mines Tournament in September, followed by the Capital Classic Tournament, and then the Midwest Region Crossover before GLIAC play even starts.

Not only is the transition between coaches exciting because it’s only the second time that it’s happened in the 52 years of the program, but it’s also a bittersweet goodbye for Scanlon.

“When I came to Grand Valley, I was a young mom, my kids were four and six, now they’re 31 and 33,” Scanlon said. “When you’re in the thick of it and you’re coaching and you’re in there and you’re competitive, it’s really, really hard to get a perspective on the whole big picture of 26 years. It’s all starting to hit me just now. I’m realizing I need this process, I need this, I guess closure, is what I would call it.”

For Scanlon, Johnson, and the GVSU Athletic Department, this passing of the torch is another opportunity to take a step back and appreciate the amount of support, success, and drive that the women’s volleyball team has been a beacon for. With a head coach like Scanlon, Johnson is more than prepared to take the next step in the program’s history.

“He’s my best friend and I’ve worked with him for 20 years right in the office next to me; we’ve been through so much together and I’m going to miss seeing him every day,” Scanlon said. “I do want to take a step back; I want to give Jason the opportunity for him to just get in there and do his own thing and have his own presence, and him not feel like I’m right around the corner.”

This 2021 season will be a roller coaster of ups and downs, but the Laker fan base will be supporting the team every step of the way as Coach Johnson takes on his inaugural season as head coach, and Scanlon may even be in the stands every so often, never more than a phone call away.