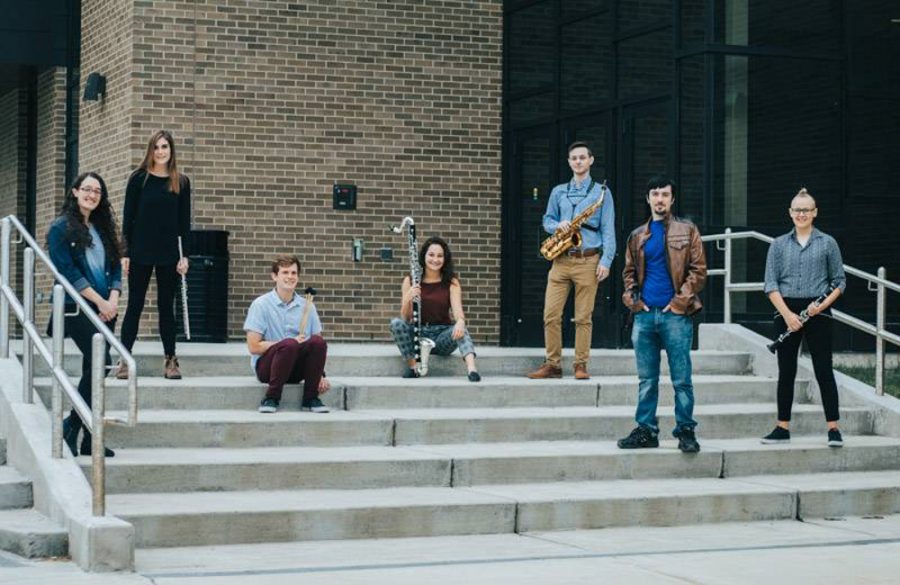 This summer Grand Valley State University’s New Music Ensemble was able to take to the road once again after not having performed since 2020.

Founded in 2006 by Director Bill Ryan, the New Music Ensemble is a group of undergraduate students that strive to promote contemporary music through commissions, tours, recordings, educational events, workshops and videos.

This was the New Music Ensemble’s fourth national park tour, and was originally scheduled for the summer of 2020 before being postponed due to the COVID-19 pandemic.

The tour spanned 16 days, 3,100 miles, and across six different national parks throughout the eastern side of the country, as well as some locations within the Great Lakes region.

The ensemble performed nine songs written by nine different composers, including “Not My Home” by Eve Belgarian; “Dune” by Marc Melits; and “Sumer on Mount Desert Island” by Zoe Keating.

Ryan said the group was ready and eager to get back to doing what they do best.

“Performing for live audiences this summer was an emotional experience,” Ryan said. “It’s why musicians put in the hard hours of practice and rehearsals, to then be able to share our work with others. After a forced eighteen months off, it was quite a joyful experience to be able to interact with audiences again, in the beautiful setting of the national parks.”

Ryan said touring is very important to the New Music Ensemble, as it is what inspires their performances and best prepares students for life ahead.

“The experience of touring gives the musicians a taste of what life on the road might be if they choose to pursue that after GVSU,” Ryan said. “The travel can be tiring, but despite that fatigue you have to bring your highest level of musicianship to the stage for every performance.”

The New Music Ensemble is not stopping their musical endeavors at just touring, however. As the fall Semester begins at GVSU, the group will present “The Lake Michigan Project,” a collection of musical works inspired by the iconic lake.

“We commissioned five composers to create music inspired by Lake Michigan,” Ryan said. “Last year we recorded three of the works and put together videos, and this semester we’re bringing the composers to campus and performing for live audiences.”

Ryan said the way in which the group commissions composers is key in their creative process.

“One of my favorite things that the ensemble does is to commission composers for new music,” Ryan said. “We get music that is tailored to the group, get to work with a wide variety of composers in its preparation, and then perform the world premiere.”

For more information on the GVSU New Music Ensemble and their upcoming Lake Michigan Project, you can visit their website at https://newmusicensemble.org/projects/lakemichiganproject/.