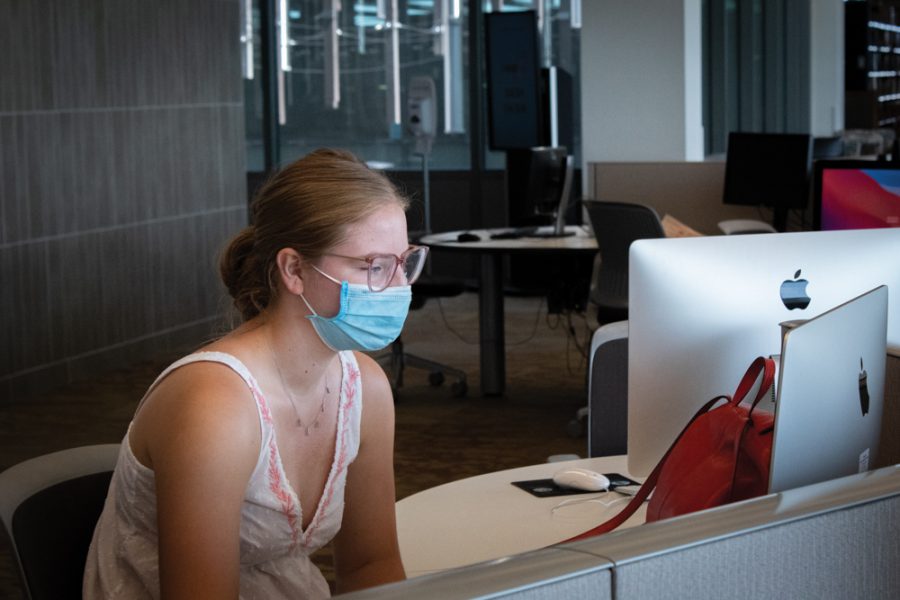 Following Grand Valley State University’s decision to require all students, faculty and staff to be vaccinated by Sept. 30, barring a medical or religious exemption or postponement, members of the GVSU community have been outspoken regarding their stance on the issue.

GVSU student Emily Coll said that she was relieved when the vaccine mandate was announced.

“I think it’s just safer to be on campus with the mandate and makes me feel better about walking around, just seeing people and going into in-person classes,” Coll said.

Coll said that for her, the vaccine was never a question of if, but of when. She received her second dose in March 2021. Coll works part-time as a phlebotomist for Spectrum Health and said that seeing the effects of COVID-19 in the hospital has reaffirmed her decision.

“The FDA approval and the mandate was not at all a factor in me getting the vaccine,” Coll said. “I wanted a vaccine as soon as possible so that I could be safe and healthy, and not have to worry as much.”

Coll said that the GVSU mandate made her more comfortable attending in-person classes this semester despite the rise in new COVID-19 cases.

“I do think that if they wouldn’t have had the mandate, I would have taken online classes again,” Coll said. “Having it be mandated made it easier for me to like think that everybody around me is being safe.”

Unlike Coll, GVSU student Grace Bartholomew said she was surprised by the vaccine mandate. For Bartholomew, it was a choice between going to school or getting the vaccine.

“I knew that other schools were mandating vaccines but I didn’t expect Grand Valley to because we don’t have the population a lot of the other bigger schools do,” Bartholomew said. “When I first heard of mandate, I was kind of scrambling to piece things together and thinking what I should do in order to either get it or not get it.”

However, following the initial announcement, Bartholomew said that she applied for a religious exemption, and received approval after about five days. Bartholomew said she knows of people who are still working through the exemption process.

Bartholomew said she felt the Sept. 30 deadline was coming fast, especially as the first day of classes and tuition payment deadline approached.

Virus Action Team director Greg Sanial said students who have applied for an exemption or postponement can expect a response by Setpt. 3, the 100% tuition refund date, at the virtual town hall on August 19.

Bartholomew is not an outlier in the GVSU community. A petition to end the vaccine mandate at GVSU has over 7,000 signatures on Change.org, and is part of a larger group of students protesting vaccine mandates at other Michigan universities.

The Virus Action Team continues to defend the necessity and legality of the vaccine and mask mandates, and encourage vaccinations through messaging across campus, including campus emails, GVSU social media, campus signage, GVNext stories, Blackboard, self-assessment, the GVSU Homepage, and of course, the Lakers Together website, Dottie Barnes, University Communications, said.

GVSU faculty have also expressed concern regarding the vaccine mandate. A petition in favor of the mandate that received over 800 signatures included 247 faculty and 55 staff signatures.

In a statement released on August 27, the GVSU chapter of the American Association of University Professors (AAUP) expressed concern over the Sept. 30 deadline and lack of clarity regarding enforcement of the mandate. According to the statement, GVSU faculty had recommended to the academic senate that Setp. 1 be the deadline.

“It is our considered view that both the September 30 deadline for receiving a first dose of the vaccine and the lack of a clear policy for enforcing the vaccination requirement will increase the possibility that the coronavirus may spread across our campuses and infect students, staff,  administrators, and faculty, as well as our family members and the community,” the statement says.

Chief Human Resources Officer Mychal Coleman said that the human resources department is working on educational resources about COVID-19 as well as other vaccinations for faculty and staff who are not yet vaccinated. Coleman said that the HR department is working on a progressive due process that aims to answer questions, educate and inform GVSU employees about the vaccine before termination.

“I will do everything I can to try to help the employee out in terms of this, but we have to make sure to do whats best for the safety of everyone,” Coleman said. “The best I can do is education, and you can make a decision from that.”