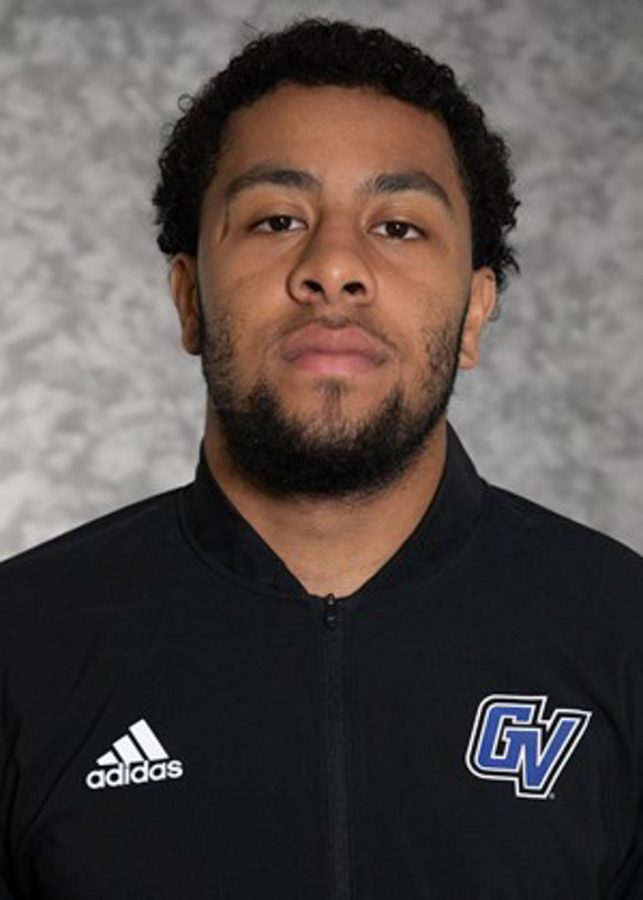 This football season, as fans are watching Grand Valley State University play at Lubbers Stadium, they may catch number seven making some game-winning plays as the last line of defense. Antonio Strong, a junior this year, is taking on two new positions on the GVSU football team: safety and team leader.

It’s been two years since there’s been a full Lubbers Stadium and a true game of football played on the field, which makes veteran players even more important when welcoming new faces on the team for their proper introduction to GVSU football. Strong didn’t earn his position as a team leader for being a veteran player though. His high character, personality and confidence are what head coach Matt Mitchell believes to be Strong’s winning leadership traits.

Strong started his sports career in third grade playing tackle football, following in his two older brothers’ footsteps. He wanted to play running back in fourth grade but was too big at such a young age for that position, so he decided to take that year off and hasn’t missed a season since. Once fifth grade started, he’s been playing positions all over the field but has landed himself a spot as safety for the 2021 season.

“This is what I’ve been waiting for the most—in school and all that—I do everything for football,” Strong said. “But I know it’s going to come to an end soon, so I try to get a life outside of football, but I love football; there’s nothing else better than this.”

Strong keeps up with his double major in Communications and Business at GV, but because of the COVID-19 extended eligibility for student-athletes, he plans to spread his last two years out between fall semesters so that he can stick with his team for as long as possible. With the extra years of college football under his belt, he has the advantage of experience in real time games—something that can help out a lot of his new teammates.

“I like the challenge because I know everybody’s not a leader, so some people have to follow,” Strong said. “I’ve always been told that, ‘you’re a big influence on people,’ and it just clicked one day that I could actually be an influence and help people out.”

Strong graduated high school from Grand Rapids Catholic Central under coach Todd Kolster, who put in a good word for him to Coach Mitchell when he was looking for schools. He won a Michigan High School State Championship in 2016 and earned All-State, All-area honors. His freshman year at GV he was redshirted, and his sophomore year in 2018 he played in twelve games, tallying 18 tackles and one interception. During the 2019 season, he came out an All-GLIAC player where he made his game-winning tackle against Ferris State University: a college career highlight. This season, he wants to take home the National Championship.

“I think what we’ve seen is a growth in his voice,” Mitchell said. “Before he was just kind of one of those guys that did what he needed to do to be elite as a player, and now because he has confidence in himself as a player and a person, he’s been able to project a little bit to his teammates.”

One of the biggest factors that Mitchell looks for in recruits is character because of how much it affects the culture of a team. Trust, however, is ultimately what makes a great team, and you can’t have one without the other, which is what Strong’s high school coach vouched for when Mitchell was looking for players.

“He’s backed up what he’s saying with his play,” Mitchell said. “We need him to be a highly productive safety; we don’t really have anybody on the back end of our defense that’s returning. We have a lot of new faces, so he’s got to try to make his plays.”

With his family supporting him at home, Strong has all the motivation that he needs to make the most out of his penultimate season as a Laker before he moves on and leaves his football career out on the field. Although football will always be a big part of his life, he plans on using his experiences at GV in his dream to become a trainer post-graduation.

For now, Strong will be coming in for his fourth season of GV football out on the home field for the debut game of the 50th season on Thursday Sept. 2 against Edinboro where Lubbers stadium will, once again, offer an incredible welcome back night for GV football fans.