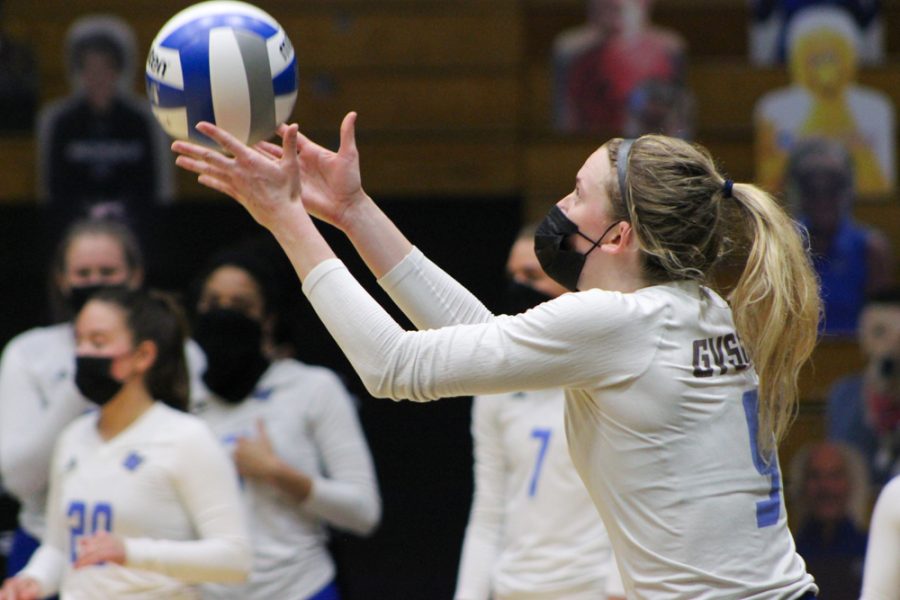 This past weekend, the Grand Valley State University women’s volleyball team kicked off their fall season as first-year head coach, Jason Johnson, takes his new team into their first season together. In the preseason coaches poll, the team was selected to win first in the GLIAC south division and finish third overall in the conference. Coach Johnson said, after being involved in the program for over 20 years, the preseason hype around his team hasn’t added any pressure to his first year as head coach.

Now, with fall sports officially underway, the Lakers traveled west to Golden, Colorado last weekend to compete in the Oredigger Classic where the GVSU volleyball team played two matches on both Friday and Saturday.

The Lakers dropped their first match of the tournament against Sioux Falls, who took a 2-0 lead after the first two sets. However, GVSU fought back, tying the match 2-2 before losing the fifth set 15-12. Friday evening concluded with a similar result, matching up against Southwest Minnesota State University, the Lakers went down 0-2 in the early stages of the match and could not recover, losing the match 0-3.

“It was great that we were ranked that high, but it doesn’t really matter if they can’t come out and produce,” Johnson said.

Sophomore Sarah Wight, who was selected by the coaches to the All-Tournament team, said the team did a great job of keeping their heads up after losing both matches on Friday.

“The whole weekend the team did a really good job of sticking together and supporting each other,” Wight said. “We did get down a little bit during the games, but right after we did a great job of the, ‘let’s get back at it’ mentality, we were excited to play again. We knew we were playing really tough teams Saturday so we were really excited to just go at it and give it our all.”

Saturday, the Lakers started strong, winning their first set of the day 25-19, but ultimately lost the first match in five sets against Colorado School of Mines. The fourth and final match of the weekend is where things finally fell into place for Johnson and the Lakers, as they defeated Colorado Mesa in four sets.

Wight led the way, totaling 17 kills and six blocks and finished with a total of 55 kills and 19 blocks throughout the course of the tournament. In the win, sophomore Jaelianna Primus added seven kills and six blocks, junior Abby Graham chipped in with 11 digs, and sophomore Lisa Sulivan contributed with eight kills. There were three main components that Wight said helped propel the team to its first win of the season.

“(We were) getting on the team early, learning to finish, and just keeping the intensity up the entire time,” Wight said. “The whole team, the bench and on the court, we had great energy and that was a factor.”

Defeating CMU was officially the first win of the Johnson era for GVSU volleyball.

“It was a great feeling for me obviously getting that first win as a head coach,” Johnson said. “I think more than anything it meant more for me to see our kids finally get that win for how hard they worked this weekend.”

Finishing matches is something both Johnson and Wright made a point to emphasize after the tournament. In the first three matches, GVSU lost a total of five sets by two points.

Looking ahead for the Lakers, Johnson said the focus will be getting off to a better start and finishing strong. The next time the GVSU volleyball team takes the court, it will be in Springfield, Illinois for the Capital Classic Volleyball Tournament on Sept. 10.

“No doubt I would hope to be able to go down there and have a successful weekend from a win-loss standpoint, but really the focus for us is just growth,” Johnson said. “I want to use these first two weekends as an opportunity to learn how to compete, develop our chemistry, and make sure that we are connected as a team.”