Skelletones returns: An all ages venue for a new generation 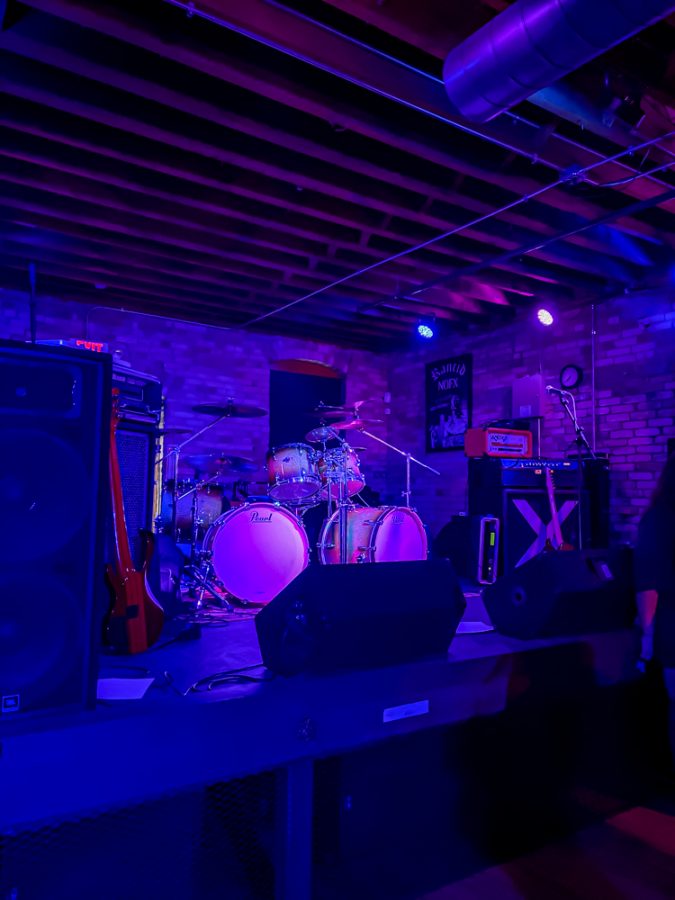 After a successful run from 2000-2009, the live music venue Skelletones in Grand Rapids went on hiatus when owners Mark and Annette Leech wanted to settle down and start a family.

Three children and twelve years later, Skelletones has returned for a grand re-opening, and it’s back and better than ever.

On Sept. 10 at 7:00 p.m. the doors to Skelletones were opened once more, and people flooded into the all-ages venue for a night of live heavy metal and punk rock performances. Mark was excited to see the doors reopen.

“It certainly feels like a homecoming,” Mark said. “This weekend a lot of the bands that are playing are all guys who grew up at Skelletones. Now they’ve matured and their bands are really good. It feels like the beginning of a new chapter in our life. Even though it’s an old chapter it’s like a full circle.”

When Skelletones first opened in 2000 it was a fully functioning coffeehouse with a cafe and live music. Leech said they realized quickly that there was not only a space issue, but that no one was as interested in the food as they were the performers.

After closing in 2009 the Leeches sold the coffeehouse to friends, whose business didn’t go as planned, and it closed once more.

Now, Skelletones is located in the basement of this coffeehouse where there is plenty of room for the band and those that come for the show.

There is a bar area but it is only used for light refreshments such as Coke, Redbull and water. No alcohol is served at the venue.

Leech said Skelletones is purposefully geared towards high school and college students so that younger people can have a place to come that is “safe and yet still cool.” He said they decided to re-open the venue because he noticed the lack of this type of venue in Grand Rapids.

“We didn’t know if we would ever pick (Skelletones) up again and honestly if we hadn’t it felt complete to me,” Leech said. “It felt like we went for something, it worked, we got to be a part of something bigger than us, and I was okay moving on. It really just became over the last two or three years my wife and I both felt like there was such a need again for an all-ages venue.”

He said while he loved the music, it is not as much about the show as it is the venue itself.

“I think what always motivated us wasn’t the music as much as trying to give young people a safe place to go on the weekends,” Leech said. “Especially because we target a demographic like myself growing up, a lot of them come from broken homes, a lot of them from very at-risk situations. So, for us to try to be a positive voice or a listening ear at a stage of life when a lot of young people could be making very destructive life decisions is important.”

Leech said growing up his stepfather was physically and verbally abusive, so as soon as he could leave the house at ages 15 and 16 he went in search of music venues to spend his nights — even if they weren’t safe for him.

He said most of the time he found himself at punk and metal shows hosted in sketchy clubs where he was exposed to drugs, alcohol and scandalous behavior — all of which was normal for the people in attendance.

“On one hand that sounds cool, but, if I’m being honest, when I was 15 or 16 years old going into those situations it felt really intimidating,” Leech said. “It felt very unsafe. I pretended to act hard and tough on the outside, because you have to, but on the inside, I remember thinking ‘Oh my mom wouldn’t like this,’ and, ‘I don’t feel safe here.’”

Leech drew from these experiences to create Skelletones, a safe haven for kids just like him.

“I think a place like Skelletones would’ve meant a lot to my younger self because I would’ve loved the community of broken people like me without the add-ons of some of the negative garbage that can come along with that,” Leech said.

In addition to the shelter that Skelletones provides, Leech also hopes that it can be a place of open conversation and connection between people who normally wouldn’t get along.

“What I want is a community where people who see the world differently, people with opposing worldviews, whether it’s spiritually, politically, whatever it is, can come together,” Leech said. “You don’t have to think like the person on the other side of the table, you don’t even have to agree with them, but, I love situations where you actually have to get to know somebody who thinks differently than you, and at least understand why they think the way they do.”

Leech said in order to foster this type of environment he will often have bands with different views play on the same night, hoping to create a connection greater than opposing beliefs.

“We kind of do that on purpose because we want to get both of them out of their bubbles just to see the bands sitting at their t-shirt tables, becoming friends with each other,” Leech said. “I love when I see those connections happen instead of people just shouting at each other on social media. I just think we can have better conversations.”

While many of those in attendance at Skelletones shows are of high school and college-age once more, Leech said he hopes that returning Skelletones members will help to make it feel as welcome as it did when they were younger.

“Two years ago there was a Skelletones tribute show at The Intersection at Grand Rapids organized by a bunch of our former regulars,” Leech said. “Towards the end of the night before the last band went on I got up and I said it’s a lot of fun to look back at something we all had when we were younger, but I really challenged them.”

The challenge in place: “don’t get stuck looking back, look around.”

“I said, ‘The thing that meant something to most of you at Skelletones beyond the music was that somebody took you under their wing,’” Leech said. “‘Somebody a little bit older than you was kind to you, didn’t treat you like the ‘stupid 15 or 16 year old.’ Now, go do that, go be that for somebody else.”

Leech said it is his hope that the Skelletones community will be around for another 10 years, and he will pass on the torch to a new generation.

“I am getting older so there’s only so many years of running around with the young kids that I can do before I probably have to start slowing down,” Leech said. “I would love to leave it in the hands of someone that could carry it on past me, and probably even do it better than me. That would certainly be a win 10 years down the road.”

Skelletones’ next show will be Sept. 17 at 7:00 p.m. Admission is $5 and proof of vaccination with a photo ID, a clear COVID test, or a mask are required. Guests are able to choose what they prefer.