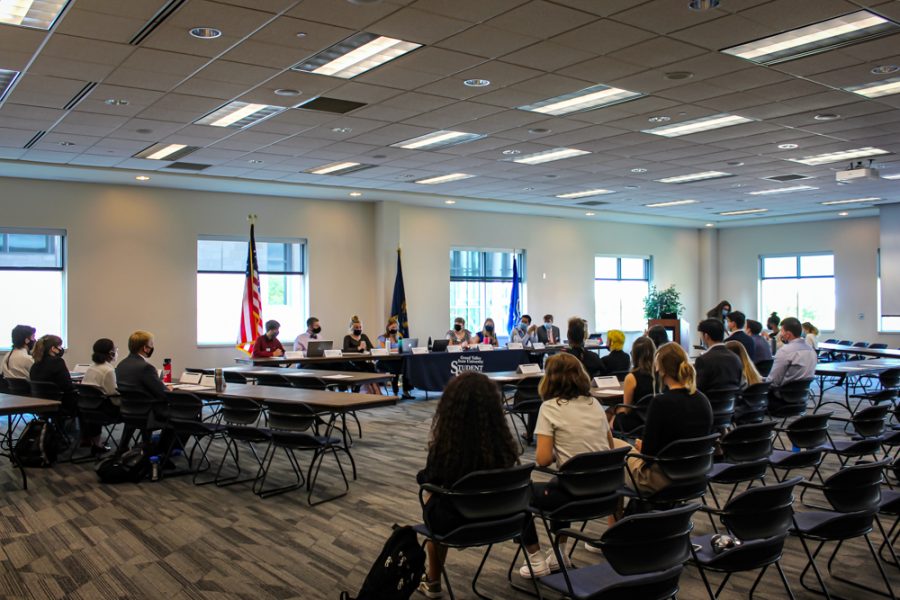 In their second general assembly of the semester on Sept. 9, Grand Valley State University’s Student Senate heard from representatives of the university’s Reach Higher 2025 initiative and began considering its potential endorsement.

Hearing from representatives of the initiative’s Steering Committee, student senators asked questions and sought clarifications in search of a full understanding of the plan. Laying out the initiative and taking senate feedback, the presenters aimed to leave key impressions on the governing body.

“Hopefully we left with them the impression about how important students are to this process, to us, (and) to this university,” said Janet Winter, Associate Dean of the Kirkhof College of Nursing and co-lead of Reach Higher 2025’s Steering Committee. “I’m hoping that they understand how integral they are to any kind of strategic planning process.”

Speaking from their personal views, senators expressed differing perspectives of the initiative’s progress so far.  Senators like Jasmyn Pearson welcome the initiative’s goalsetting but are ready for it and the university to include more specific action.

“(The goals and methods) do seem adequate in their language, it’s just in their implementation that I am worried about,” Pearson said. “We can say all these nice things, but how do we know that they’re going to be implemented?”

Alternatively, senators like Senate Vice President for Educational Affairs Faith Kidd are abstaining from calling for what could be a premature narrowing of the initiative’s focus.

“I think the most important thing to remember, which we did cover, is that that was the Steering Committee, so their job is setting goals,” Kidd said. “Their job is to set goals that encompass 28,000 students, so you have to be broad in that sense.”

During the meeting, the presenters made it a point to clarify that particular methods of implementation would eventually be left to each educational department later in the process. However, with time, Kidd is looking forward to figuring out how the initiative can be synthesized into specific action.

“What I think is most important is not the setting of goals,” Kidd said.  “It’s what we’re doing next which would make sure we’re implementing things that follow the goals and the overview that (the Steering Committee) are setting.”

As for the Steering Committee themselves, they hope to engage more of the campus community in the conversation surrounding Reach Higher 2025.

“We’re going to continue to try to talk to as many groups of stakeholders as we can,” said Mark Schaub, Dean of the Brooks College of Interdisciplinary Studies and co-lead of the Steering Committee. “That’s what we’ve been doing, and we’ll keep doing that for the next month or two.”

Looking forward, the Student Senate plans to advance its discussion on endorsing Reaching Higher 2025. According to Student Senate President Autumn Mueller, a statement of approval for the initiative will be written and will sit with the senate body for 24 hours for any edits senators may have. Afterward, the statement will be put to a vote before the senate cabinet.

To learn more and share your own feedback about the Reach Higher 2025 initiative, visit https://www.gvsu.edu/reachhigher2025/.