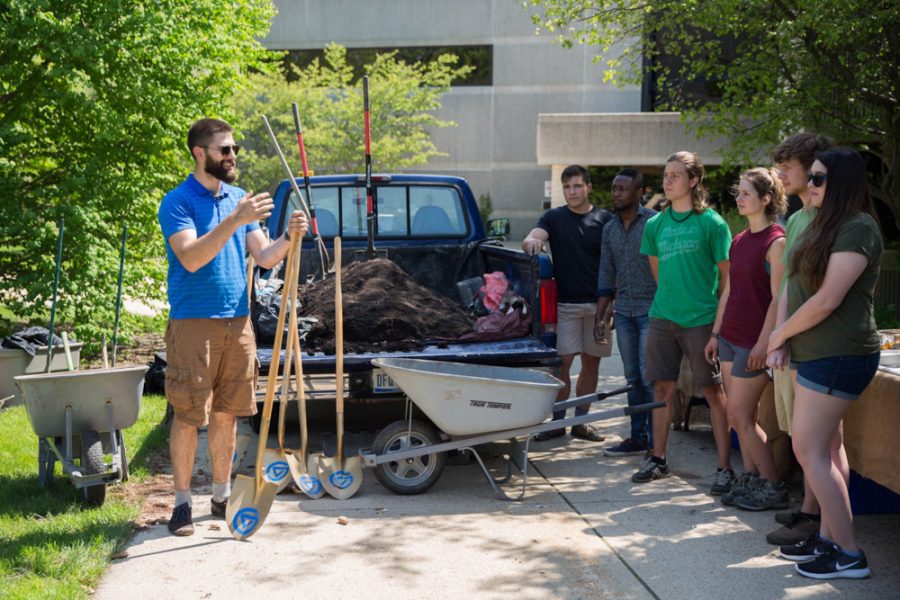 In efforts to continue Grand Valley State University’s sustainable practices and maintain the amount of waste entering the landfill, the Student Environmental Coalition (SEC) planned to ensure that the first football game of the season followed a “zero waste” guideline.

Volunteers from the club stepped foot into Lubbers Stadium on Sept. 11 with full motivation to guarantee the waste was sorted properly and no trash was left behind after the football game ended.

Jacob Torok, vice president of The Student Environmental Coalition, said that initiatives like the zero-waste football game are an important way for GVSU and its students to make a difference and dedicate themselves to sustainability.

“We could really set a huge example for every university. Not only in the country but honestly beyond,” Torok said. “It will be a perfect start. I love seeing small things grow.”

For Torok personally, he hopes to leave this planet and everything around him better than how he found it– and that includes GVSU.

The football game was an opportunity to help lessen the waste at GVSU, but also to educate fans. Volunteers at several waste stations help attendees organize their trash when throwing it away to ensure that items are organized and separated correctly in three separate bins: compost, landfill, recycle. At the end of the game, the volunteers made laps around the stadium, picking up any trash that was left behind and making sure it gets into its rightful assigned bin, Torok said.

“It’s about people picking up after themselves, being responsible for the waste they produce, making sure it’s not only taken care of but done in a sustainable way,” Torok said.

While GVSU and the SEC are consistently and actively pursuing ways to help the environment, the club is in need of more volunteers.

Torok said that in a GVNext article from 2012, there were over 100 volunteers for a zero-waste football game at GVSU. Now, he says that there are five volunteers, six if he includes himself. Torok said that volunteering with the SEC has been a great learning experience and hopes more students will join them in the future.

“We have all the resources necessary, we just need passionate people to care and to implement that,” Torok said. “It’s a way for me to dedicate my time to making a difference around me, and it’s also great for networking with and getting to know other like-minded people.”

As the SEC continues its efforts to run environmentally friendly and organized football games, more volunteers would help this become a trend on GVSU’s campus. The effect would be greater the more the university is able to have games that follow zero waste.

The SEC spends most of its time doing outreach volunteering such as campus cleanups and river cleanups. The club also spreads information about ways to do your part to help the planet, according to Torok.

“The SEC is a great way to really make a change here on campus,” Torok said. “The SEC has helped me to grow as an activist and a caregiver of our planet.”

The club plans to take further steps to increase campus’ sustainability following the zero-waste football game. The effort will most likely continue through the season, making an appearance in other home games as well.