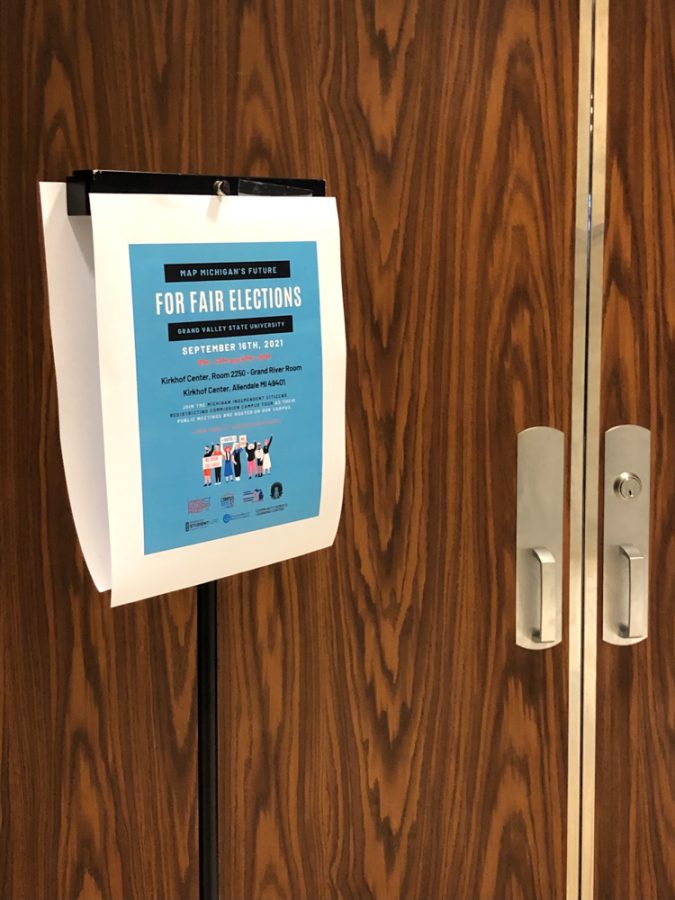 Amidst an era of heightened political tension, a bipartisan public commission is setting out to involve citizens- especially students at Grand Valley State University- in the redistricting process. The Michigan Independent Citizens Redistricting Commission met on GVSU’s campus in an open-to-the-public meeting to continue drafting new state voting districts.

Resulting from a 2018 vote that amended the Michigan constitution, the commission consists of four Democrats, four Republicans, and five Independents. The commission uses a trove of data provided by past elections and the 2020 census to draw proposals for new voting districts in the state.

According to the commission’s website, its mission centers around a “citizen-led, transparent process” of crafting new districts for the Michigan State Senate and the U.S. and Michigan State Houses of Representatives.

Since its inception, the commission has held public meetings across the state to begin its work and include public input in its decision-making. Conducted in partnership with the university’s Community Service Learning Center (CSLC), the meeting was held in the Kirkhof Center on the Allendale campus on Sept. 16 as part of the commission’s college tour throughout the month.

Designating five universities across the state to host select meetings, commissioners hope to blend the usual public participation with an element of education for students and others to learn more about the body and its efforts to conduct fair redistricting.

Anthony Eid, a 28-year-old medical student and former president of the Wayne State University Student Senate, recognizes the important role student education and input plays in the commission’s work. Serving as a member of the commission himself, Eid sees the college tour as an opportunity to involve students in a historic discussion in which they are a major constituency.

Students, Eid said, represent an important community for the commission to consider. Since the new districts may affect who serves as the students’ elected leaders, Eid believes that decisions that directly affect their daily goings-on could rest on the commission’s work.

Because of that potential reality, Eid views student input in the commission’s work as vital to the process.

That impression is one the public could certainly feel during the meeting. Students like GVSU Student Senator Nancy Hoogwerf who attended the meeting were left with a firm grasp on the critical nature of the commission’s work.

“I believe that (students were) able to see politics firsthand,” Hoogwerf said. “All of those decisions being made in that room were basically decisions that will impact legislative decisions in the future. It was super important.”

That importance to the campus community is far from lost on faculty members. Helping to facilitate the commission meeting, Melissa Baker-Boosamra CSLC Associate Director of Student Life knows just how much an experience such as this can impact students.

“It’s number one, the opportunity to have their voices heard,” Baker-Boosamra said. “Number two, it’s learning about the process and how mapping and redistricting works up close and personal and firsthand.”

Looking forward, Baker-Boosamra is optimistic that by being exposed to opportunities like this meeting, students will better understand this crucial process before the newly drawn districts take effect in the 2022 midterm elections.

“I hope that it sparks an interest in students to learn more about what this process is all about because it, at a really fundamental level, will impact all of us as we go to cast our votes,” Baker-Boosamara said.