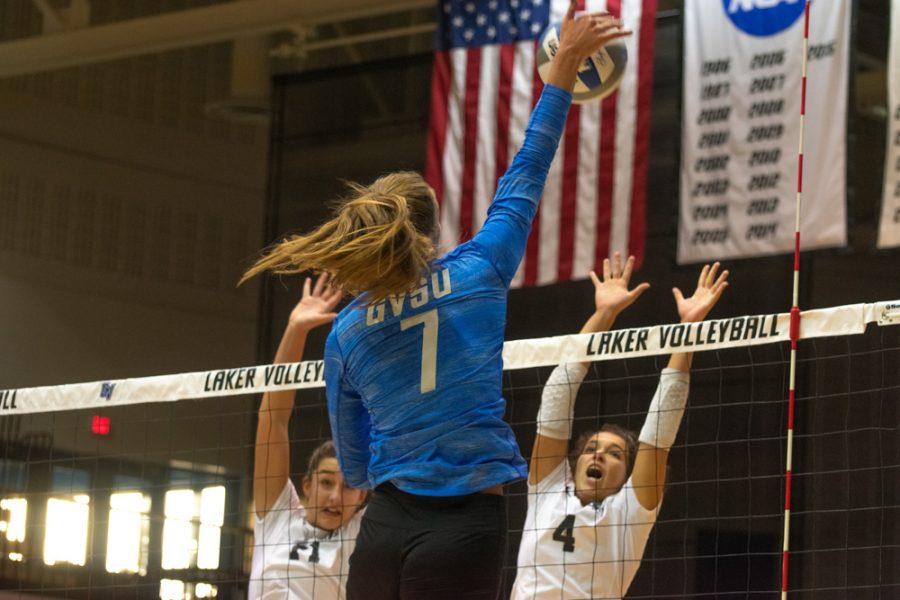 The Grand Valley State University volleyball team made a trip to Michigan’s upper peninsula this past weekend to compete in their first GLIAC action of the season. Heading into conference play, the Lakers were 4-4 with three of the four losses coming to teams ranked inside the top 25 in the nation.

Friday, Sept. 17, conference play began as the Lakers took on Michigan Tech, who came into the match with a record of 5-3. GVSU took the first set of the match 25-21, before dropping set two 25-18, leaving the match tied at 1-1. The back and forth continued, as the Lakers took set three in an intense 25-23, then dropping the fourth set 25-19. With the match tied 2-2, the Lakers just edged out the Huskies in the fifth and final set 15-12, deafening MTU 3-2.

Winning the match advanced the Lakers win streak to four, while snapping a four game win streak for MTU. Helping lead the way for the Lakers was junior Abby Graham, who recorded 18 kills and 16 digs in the match. Junior Ali Thompson added 16 kills and 20 digs, while sophomore Sarah Wight chipped in with 11 kills and three blocks.

“A big key has been confidence and composure over the last few games,” Graham said. “We have really been focusing on being mature and playing together and I think it really showed in our play last week.”

Day two in the upper peninsula featured a showdown with Northern Michigan University. The Wildcats were 4-5 overall and 1-0 in the conference, coming off an upset victory over Ferris State the day prior. Following a close first set where the Lakers won 25-22, GVSU never looked back, sweeping NMU after winning the second set 25-16 and the third and final set 25-18.

“When you are able to keep the ball in your setter hands and allow your hitters to run free it creates a lot of problems for the defense on the other side and that’s really what ended up happening,” said coach Jason Johnson.

Graham once again had a strong showing, contributing with 11 kills. Sophomore Sarah Wight added 11 kills and five blocks in the match. Thompson chipped in with 10 kills, while sophomore Rachel Jacquay finished the night with 37 assists. Johnson said the key to success for his team has really been everyone buying in and playing for each other, from the players on the court to the players on the bench, everyone has been committed.

This is the first time since 2015 that the Lakers have made the trip to the upper peninsula and beaten both MTU and MMU. With the pair of back-to-back wins, the Lakers are now 6-4 on the season, 2-0 in the GLIAC, and are currently on a five-match winning streak.

“It was never a question of ‘were we talented enough’ it was just a question of learning how to finish and win matches,” Johnson said. “I think that the grind that we went through in some of those losses taught us valuable lessons.”

GVSU will take on rival Ferris State in Big Rapids on Thursday, Sept. 23, which will be the first time the two teams play in nearly two years after not having a match last year due to the shortened season.

“Heading to Ferris is all about emotional control,” Johnson said. “Coming into an environment that is your rival, very difficult to play in, very noisy and a very small atmosphere. For a lot of our kids, it will be their first experience in that environment and it’s going to come down to how they handle their emotions and manage the stress level once they’re playing.”

Following the showdown with the Bulldogs, the Lakers will travel across town to take on Davenport in Grand Rapids on Friday Sept. 24 at 7 p.m.