The bias behind student evaluations 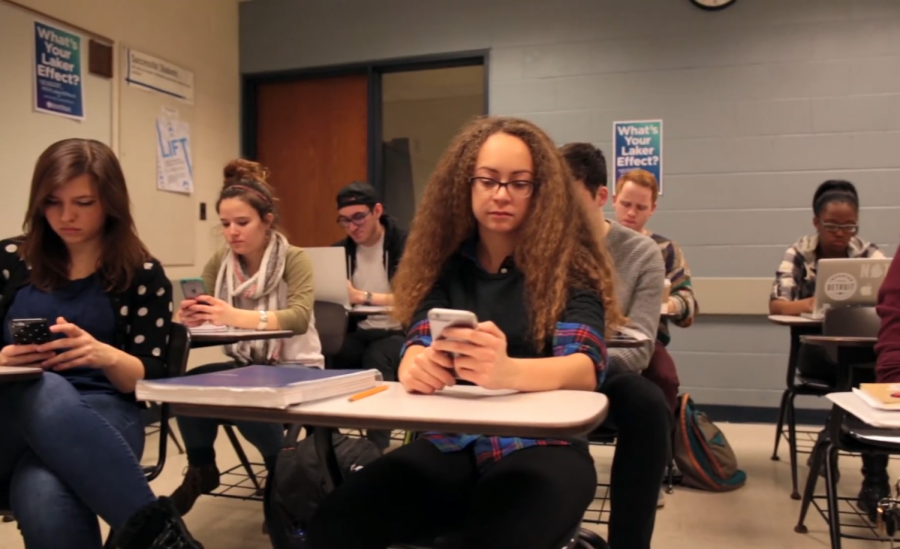 Contrary to many popular assumptions among students, taking the time to fill out your end-of-the-semester faculty evaluations does have a tangible effect on your professors. Far from being ignored, student evaluations can cross the desks of a faculty member’s colleagues, their department head, even the dean of their college.

“Different units, departments and colleges may have different practices,” said Ed Aboufadel, Grand Valley State University’s Associate Vice President of Academic Affairs. “But ultimately, the evaluation of faculty involves student evals, and faculty evaluates faculty. So, colleagues have to have access to your student evaluations— they become a part of your tenure portfolio and contract renewals.”

Student feedback, in accordance with GVSU’s faculty handbook, makes up one-third of the evaluation of teaching (alongside peer and self-evaluation). At its ideal, the inclusion of student impressions of faculty teaching as a factor when making important performance review decisions like granting tenure prioritizes student needs, reinforcing GVSU’s focus on teaching. On the downside, however, students can be fallible: especially when it comes to potential bias in their evaluations.

In the article “Evaluating Student Evaluations of Teaching,” a review of the scholarly literature on equity bias in SETs, Krietzer et al described a number of ways in which an instructor’s gender, race, ethnicity, or sexual orientation had been found to influence the results of their evaluations. In one 2005 study, researchers found that female instructors received average ratings that were one-half standard deviation lower than men’s ratings. In 2011, researchers found that Black and other non-White faculty received the lowest mean scores across 26 different evaluation items. Experimental evidence from Anderson et al suggests that LGBT faculty may be seen as more politically biased and motivated than their straight, cisgender colleagues.

Another kind of biased comment the review found in student evaluations were those targeting faculty with perceived “foreign” accents, usually with the criticism that they were impossible to understand. Paul Plotkowski, Dean of the Padnos College of Engineering and Computing, has observed this type of bias in SETs firsthand.

“I have many international faculty members in my college,” Plotkowski said. “First of all, if they could not be understood, they would not have made it through our hiring process. But to give you a sense of how silly it can be at times, a number of years ago I had two new faculty members who each received a handful of very vocal reviews about their having a ‘terrible accent,’ and those kinds of comments. ‘How could you hire this person to teach at Grand Valley?’ One professor was from Tennessee, and the other was from Toronto.”

Given that student feedback is used as a factor for decisions as serious as who gets tenured, potential bias in student evaluation results are a real concern for faculty. As part of their role as the primary advocate for Grand Valley’s faculty, the University Academic Senate (the highest elected faculty governance body) is currently examining the issue. In May 2021, the Equity in Personnel Processes Task Force was created and charged with exploring the existing literature on the issue, consulting with other GVSU groups who have already been looking at the issue, and reviewing the policies to mitigate bias emerging in institutions of higher education nationwide.

“What we’ve been finding is more and more evidence that shows that bias itself is a part of being human, and it does show itself in student impressions of teaching,” said Professor Christine Rener, Director of the Faculty Teaching and Learning Center and EPP Task Force member. “It can show up very subtly, or very explicitly. And it’s not just in the written comments. Most forms ask students to rank statements like, ‘the instructor communicated in a clear and understandable manner.’ How is that question being interpreted? If a student holds a bias against a faculty member’s accent, for example, it might trigger them to score their professor lower for that reason.”

As is stated on the Laker Impressions of Faculty Teaching page on GVSU’s website, faculty members have the right to request that comments they deem prejudicial be redacted from the LIFT documents used for summative evaluations of their performance. This offers faculty protection from especially explicit examples of bias in written responses but unfortunately cannot affect larger trends of women and non-white faculty being rated comparatively lower than men and white faculty. It also doesn’t protect instructors from comments that might be implicitly rooted in bias but don’t say anything prejudiced outright.

One poignant illustration of this problem is an anecdote from the 1997 article “Gender and Student Evaluations of Teaching”: “At a large private research university, her department discusses an Asian-American woman’s tenure case. Some of her teaching evaluation scores are low. In her teaching statement, the professor says that she believes this is due to gender and racial bias: that, in particular, some white male students were uncomfortable with her classroom authority. A senior white male faculty member dismisses this, saying, ‘I read over the open-ended responses, and they don’t say anything about her being either Asian or a woman.’”

Having reviewed the resources available to them over the 2021 Spring/Summer semesters, the EPP Task Force has presented their resulting recommendations to committees within the UAS for consideration.

“One thing that isn’t necessarily a policy so much as a practice recommendation is more awareness, understanding, and training around bias and evaluations,” Rener said. “A big part of the recommendations is clarifying what we mean by bias, and making sure that people are not only understanding that it’s an issue, but that there’s a way to mitigate it.”

Mitigating bias in SETs and their use in faculty evaluations is a part of a larger effort to revise faculty hiring and retention practices to be more equitable and inclusive.

“This is something that’s been talked about for a long time,” said Professor Felix Ngassa, Chair of the UAS. “Now, these committees are digging down into these issues. Our established policies— how are they applied? Are they being applied consistently? We want faculty to give the best of themselves, and we want them to feel supported by the university in doing that.”