GVSU Alumni discuss the importance of leading at the intersection 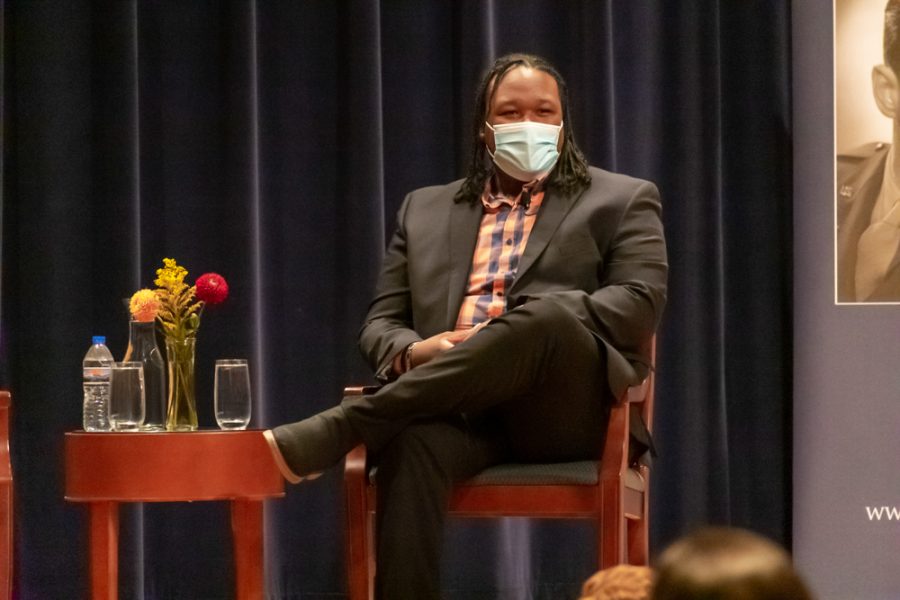 At the first Wheelhouse Talk of the school year, on Sept. 24, three Grand Valley State University Alumni were invited back to campus to discuss the importance of working at the intersection between people and work.

The discussion opened with Abby Sachs who introduced the idea that “It is vital to understand that who we are and what we do meet at (that) intersection.”

This event, moderated by DeMario Bell, invited back Danielle Harris, who graduated in 2011, Carol Reiss, who graduated in 2014 and Lawrence Williams, who graduated in 2017. The exchange focused on adding important qualities, such as inclusivity and compassion, to leaders and mentors. Everyone has identities that they carry around with themselves at all times and leaders need to appreciate and embrace them in order to positively lead at the intersection of them.

Bell, an alumnus from the Peter C. Cook Leadership Academy, set the tone of the conversation by asking the invitees what they felt it meant to be an inclusive leader.

“It’s showing up knowing you and also appreciating the fact that other people have other identities and accepting that,” Harris said.

People are three-dimensional and have many identities that they carry at all times. Harris concluded her argument by expressing that before anything else, we’re human. Reiss agreed with Harris’s ideas echoing the sentiments of being a team.

“When we come together (as a team), I think we have to be intentional about it, listen, and even delve into ourselves,” Reiss said.

Essentially adding on the idea that people are ever-changing and need to be honest with themselves in order to be a good leader and mentor to the ones around them.

This idea of ever-changing individuals was one of the central focuses of this discussion and addressed the issue of competition between leaders. Williams related it to his feelings, mentioning that in the workplace people need to trust and empower others, allowing them to take the reins even when one might be qualified as well. This to him is an essential part of being a team leader.

Consequently, the concept of individuality and its facets set out a conversation about mental health and how it can affect a person’s personal life as well as their workplace, including the ones around them.

All returning Alumni agreed that mental health needs to be at the forefront of workplaces and that inclusivity is meant to check in on the ones around you. Bell told a story of the tragic loss of his uncle, which severely affected his mental health along with it his performance in the workplace.

“If I’m not good, I cannot show up at work and be good,” Williams said.

This reinforced Bell’s idea that feelings need to be discussed and that we need to be humans first before we can focus on our work.

Turning the conversation around, Bell asked the panel what mentors and role models were a part of their lives and what qualities those people possess. Reiss spoke up and shared that she only felt appreciated in a work environment once her leader developed an interpersonal relationship with her.

This statement was reinforced by Lawrence as he recited an impactful quote said to him by one of his beloved mentors from his childhood. “When you invest in people, people will invest in your vision.” Both Reiss and Lawrence agreed on the importance of relationships beyond work.

Harris, however, brought up another quality in the discussion. She expressed that the best mentor in her life kept pushing her to do more and more and that this allowed her to do things she didn’t think she was able to do. She now uses this tactic as a leader by telling people that she’s validating her employees and encourages them to try their best.

This introduced the discussion point on failed leadership and what can be learned from an unfortunate situation. Williams quickly stepped up to share that the biggest mistake a leader above him has made was that it was all about the work and not about the people.

“We couldn’t do anything right as a team because we had things going on at home,” Williams said.

He explained that the company struggle was met with the harsh reality of being replaced if his team couldn’t meet the requirements given. He ended his idea by emphasizing how important positive energy is and it needs to be channeled in order for a team to be successful.

After sharing their insight on leadership, the Alumni panel ended the discussion by sharing a piece of advice for the audience.

Reiss explained that her piece of advice was to extend grace to others, stay curious, and stay equipped to have an honest conversation, even if it means that you have to learn new skills. Harris agreed with this statement and added that life is “an ongoing lifelong process of becoming a leader.”

If you were unable to attend the program, it is available on the Hauenstein Center’s YouTube channel.