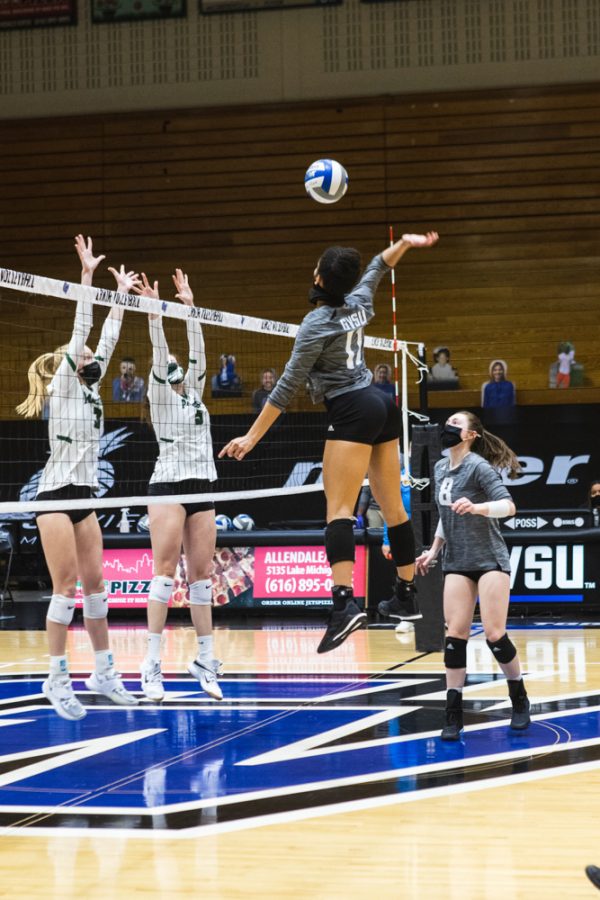 One of the most anticipated match-ups of the Grand Valley State University volleyball season came on Sept. 23, as the Lakers traveled to Big Rapids to take on rival team Ferris State.

It was the first time the two teams have competed head-to-head on the court since Oct. 11, 2019, when the Bulldogs defeated the Lakers 3-1. The two teams did not match up in the 2020 season due to the pandemic resulting in a condensed season.

GVSU came into the match on an impressive five match winning streak with player of the week in the GLIAC South from the week prior, Abby Graham.

With a lot at stake in a hostile environment, the Lakers started the match strong winning the first set 27-25, dropping the second set 25-20, before regaining control of the match after a 29-27 victory.

“We struggled to find a flow or a rhythm in the match against Ferris,” said coach, Jason Johnson. “That even started in the first set. Even though we won the set, we never really were in a good place.”

Holding a 2-1 lead and only needing to take one more set to win the match, the Lakers couldn’t get it done. The Bulldogs took the fourth and fifth sets with scores of 25-18 and 15-10 to defeat the Lakers 3-2.

Leading the way for the Lakers was junior Ali Thompson, who finished the match with 17 kills, 17 digs, and a team-high hitting percentage of .224%. Sophomore Sarah Wight added 14 kills and three digs. Graham chipped in with 11 kills and 15 digs, while sophomore Erin O’Leary finished with 28 digs respectively.

“As the match wore on, the environment kind of took a toll and the noise created some communication issues for our kids,” Johnson said. “As I said, Ferris was able to get in a little bit better of a rhythm than we were and able to really push us into an uncomfortable situation in sets four and five.”

The Bulldogs are now at 6-4 on the season overall and 1-2 in the GLIAC following the victory over the Lakers. Prior to the match with GVSU, FSU had lost four of their last six matches. Two of those losses came to Michigan Tech University and Northern Michigan University, two teams the Lakers defeated earlier this season.

After the emotions of losing to our rival team, the Lakers had less than 24 hours to turn their attention to Davenport, as they traveled across town to take on the Panthers the following day.

“We had to work past the game [against Ferris State],” said sophomore setter, Rachel Jacquay. “Take it as it was one day, it was one game, it’s over, so we had to move onto the next one.”

Jacquay and the Lakers found themselves in a familiar spot against the Panthers, as they were leading the match 2-1 after three sets.

Set four became a set of runs for the two teams. After trailing 18-12, the Lakers went on a 14-3 run, putting them up 24-21 and just one point away from closing out the match. However, the Panthers went on a mini-run of their own, scoring four consecutive points in a row and looking to force a fifth set as they took a slim 25-24 lead.

The comeback effort wasn’t enough for the Panthers, as the Lakers overcame the adversity, scoring three points in a row and winning the fourth and final set 27-25, winning the match 3-1.

“Sets three and four kind of got away from us, but I thought in sets one and two we were in a really good place,” Johnson said. “Davenport made some adjustments and we had a difficult time countering what they were doing, but we were able to pull it off at the end.”

GVSU had to overcome a career night from Davenport’s Hayley Kreiger, who broke her single match record for kills in a game as she recorded 31 of the team’s 57 kills.

“Hayley is a special hitter, her physicality, her size, her jumping ability creates a lot of mismatches and we knew going in that she was going to be the focal point for our defense,” Johnson said.

Once again, Thompson had a strong showing for the Lakers, leading the way with 17 kills, 20 digs, and hitting an outstanding .405%. Jacquay added 47 assists in the win.

With the win at Davenport, GVSU improves to 7-5 on the season and 3-1 in the GLIAC, while the Panthers fall to 6-5 overall and 1-2 in the GLIAC.

Looking ahead, the Lakers will be making their 2021 home debut, as they are set to face Parkside at 1 p.m. in Allendale, Michigan.

“We are super excited for this first home game,” Jacquay said. “We are looking forward to having friends and family there and it has been a long time since we have really had a packed arena, so we are really looking forward to that.”