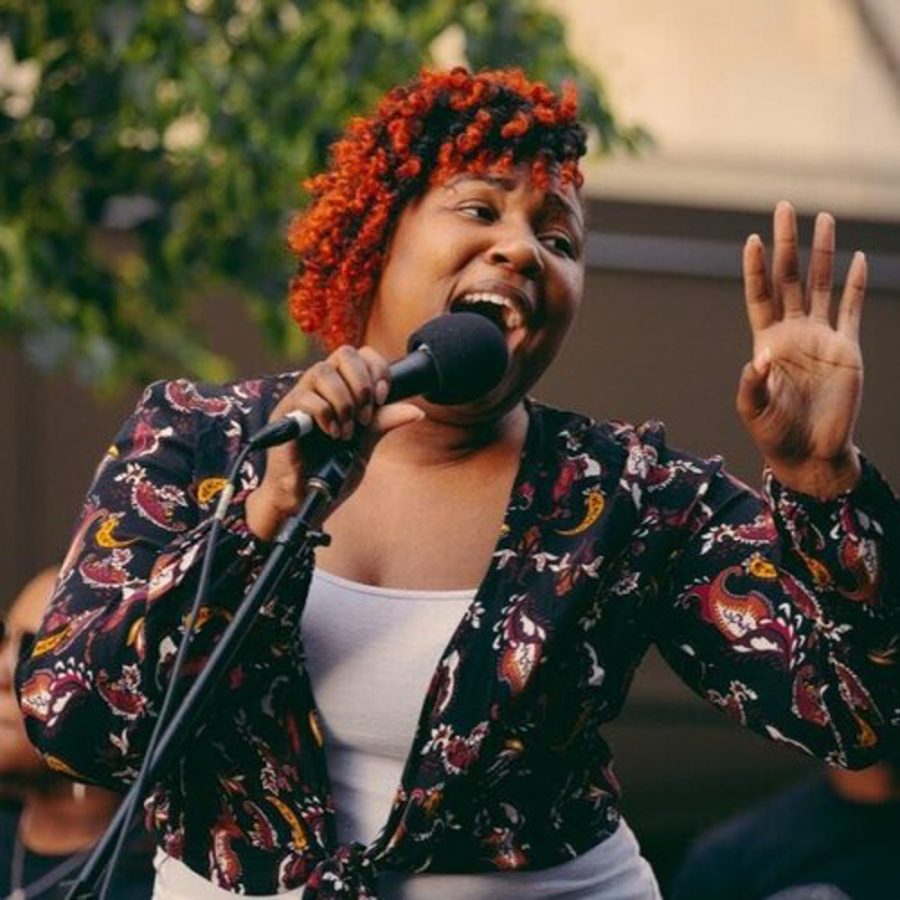 Her relatives paved their way through the gospel music industry through quartet groups such as The Wings of Faith Jrs, The Pilgrim Wonders (which included both of her grandfathers), The Pilgrim Angels, and the Wonder Boyz.

Although her parents were not together, their differing music tastes played a large role in Cutts-Jones’ love for many different musical genres.

On her mother’s side, her grandfather was a local pastor and loved quartet-style singing. Cutts-Jones and her aunts and uncles were heavily involved with the church’s music program, including the praise team, the band, and the choir.

She said Saturday mornings with her mother would be filled with old-school R&B music with artists like Anita Baker and Patti LaBelle, along with funk music like the Commodores and George Clinton.

On Saturdays with her dad, Cutts-Jones would listen to George Benson and Miles Davis, in addition to The Police and Queen.

“I’m one of those kids who on their mother’s and father’s side everyone sings, plays, or preaches,” Cutts-Jones said.

Cutts-Jones’ touring music career began when she was a sophomore at Central High School in Grand Rapids and joined her choir teacher, Deborah Perry’s, group called “Majestic Praise” in which she toured different churches or conventions regionally.

Following this, she would be contacted by artists coming to town who needed background singers, and through networking, she was able to perform in numerous shows.

Soon after this she auditioned to be a background singer with Martin Sapp, a gospel artist from Grand Rapids, and toured with him on a much larger scale for about five years.

Following her time with him, she was also contacted by an artist she had never worked with before to perform on a 16-city tour throughout Spain and Portugal.

Although Cutts-Jones grew up with music, there came a time when she almost never sang again.

At a rehearsal for a wedding, Cutts-Jones was assaulted.

“There were some issues in a marriage of a friend of mine and that kind of spilled into the rehearsal,” Cutts-Jones said. “In a way I guess it was a ‘wrong place at the wrong time’ type thing maybe. For whatever reason, the anger ended up coming toward me.”

Cutts-Jones is a single mother and had her son with her at the time. In the commotion of trying to get out of the situation with him, she ended up with extensive damage to her arm and her face.

Following the incident, Cutts-Jones was told that she had permanent nerve damage in her face. She needed to go through speech therapy and was told that she would not be able to speak, sing, smile or use a straw for a very long period of time, if not indefinitely.

Cutts-Jones said her faith is one thing that kept her grounded during this time. She said it was due to this that she stood firm in her belief that she would speak, and sing, again one day.

“I have a very close relationship with Christ, that’s what helped get me through that process, and I just didn’t believe that that was the promise of God that he had made to me,” Cutts-Jones said. “Through a whole lot of prayer, a whole lot of counsel and support from my family, I chose to stand on what God spoke to me and the word of God versus what the doctor was saying.”

She said that through this determination, she decided to apply to Grand Rapids Community College (GRCC) at age 30 despite her lack of formal, or classical training.

“I said I’m going to audition for their vocal program,” Cutts-Jones said. “I had no idea if the words were going to come out because at the time I still couldn’t fully control the left side of my face. Sometimes it would be like a heavy lump just there and I would try to speak but I couldn’t.”

She ended up being accepted to the program and credits much of her success and confidence-building at the time to her teacher, Steve Barton.

“With classical music and opera, many times for inner-city youth, a Black girl like me, that’s not something that I was exposed to,” Cutts-Jones said. “It’s definitely not something that you usually see people of color do. [Barton] completely changed my whole attitude with that…He said, ‘If you continue, what you didn’t see growing up, people will be able to see in you, and see that you guys can do this.’”

Cutts-Jones received a Degree in Vocal Performance from GRCC, and decided to take a gap semester before applying to GVSU.

During this time, Cutts-Jones began to perform in the opera show “I Dream” through Opera Grand Rapids. She began with an audition for a role in the chorus, and shortly after received an offer from Opera Toledo and Carolina to play the role of Rosa Parks.

Throughout her time at GVSU Opera Grand Rapids had Cutts-Jones back to perform in artist spotlight events or different galas.

She received her degree in Vocal Performance at GVSU in the summer semester of 2021.

Cutts-Jones recently released her first single which she described as “an inspirational song with an R&B feel” called “Clap It Up.”

She said she wrote the song to celebrate her and her baby steps throughout her accomplishments, and that it’s meant to celebrate the journey on your way to your final destination, not just when you get there.

Since graduating from GVSU, Cutts-Jones said she came up with some advice for current students.

“Be open to constructive criticism,” Cutts-Jones said. “What I noticed (at GVSU) is that a lot of people, a lot of my classmates, had a vocal teacher since they were five or had been taking lessons for forever and a day or came from a great high school music program, so in a way, they came with a mindset of ‘I already know this.’ But if you feel that you already know something that takes you out of being teachable.”

Cutts-Jones also encourages a willingness to take a chance.

“Stay open to being teachable, and don’t be afraid to go after opportunities,” Cutts-Jones said. “A lot of the opportunities I had didn’t come through going and doing a big competition. Many of them came before I got my degree. Be open to the same gift that you’re looking for being wrapped up in a different box.”

Cutts-Jones currently does “spot date” type shows which are pop-up events, but she hopes to tour in the future.