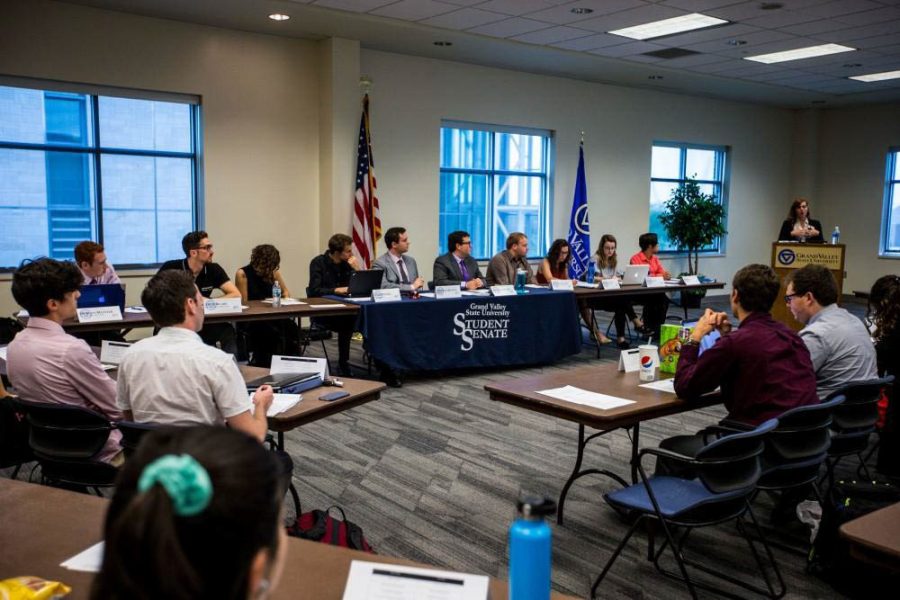 As Grand Valley State University’s Battle of the Valleys fundraiser wraps up after a three-year hiatus, the Student Senate is reflecting on its effort to reboot campus awareness and enthusiasm in the event.

Established in 2003, the Battle of the Valleys competition, held between rivals GVSU and Saginaw Valley State University (SVSU), is facilitated by Grand Valley’s Student Senate and Saginaw Valley’s Student Association. In conjunction with the football game between the universities, the Student Senate and the Student Association have worked together to organize a fundraising competition each year which contributes to local philanthropy.

“I think Battle of the Valleys, in some of the older students’ minds, is just a football game and we’ve really been trying to re-instill the fact that it’s a two-part competition,” said Student Senate Vice President for Public Relations Eldon Pearson said. “It’s a fundraising competition as well as a football game.”

Although the annual Battle of the Valleys football game between GVSU and SVSU was only cancelled for one year in 2020 due to precautions surrounding the COVID-19 pandemic, the Battle of the Valleys fundraiser has been absent from the scene since 2018. In order to raise awareness about both aspects, Student Senate officials took a different approach to this year’s campaign.

“That’s what a lot of this week has been about, kind of informing students about why we do this against SVSU,” said Student Senate President Autumn Mueller. “I think just the mentality of encouraging and getting the information out there for everyone is something that we really wanted to hammer down this week.”

Pearson emphasized the importance of changing the Student Senate’s approach to Battle of the Valleys.

“I think we went into this with the mentality that this was going to be a pivotal year for us, and we really wanted to rebrand Battle of the Valleys and I think we’ve done a really good job of that,” Pearson said. “I, personally, am happy with the progress and the outcome we’ve had.”

Evidentially, so are members of the student body. Attending one of the Senate’s Battle of the Valleys events, GVSU freshman Olivia Rand saw the value in the work of the Student Senate for students like herself.

“So far this has been a really fun experience, in my personal opinion, for us to get to know other people and experience different things around campus,” Rand said.

Indeed, the philanthropic nature of the Senate fundraising could mean that the community at large will soon be able to see the value as well. This year, GVSU’s Student Senate chose I Understand – Love Heals, a local organization based in Ada, Michigan promoting suicide and mental health awareness, as their benefactor for its fundraising efforts.

“It’s been great because we’ve been getting a lot of help from the Grand Rapids area, our beneficiary, from campus officials, and from the entire Senate body as well,” Pearson said.

Looking back on her experience with Battle of the Valleys, Mueller said she was elated at the opportunity to jumpstart the effort once again.

“For me, seeing it as a freshman and now seeing it as a senior, it’s really exciting to see it back,” Mueller said. “It makes me feel happy to be here and I want students to get involved because I’m involved, and I want them to share that same excitement.”

Although definitive amounts raised were not yet finalized, Mueller is optimistic regarding the establishment made by the Senate’s work this year and how it could set the tone for the future.

“We’re hoping that with this week what we’ve done through advertising and all of our different events that we kind of increase and maintain that kind of excitement for the years to come,” Mueller said.