GV football stays undefeated, winning first game in GLAIC play in the Battle of the Valleys 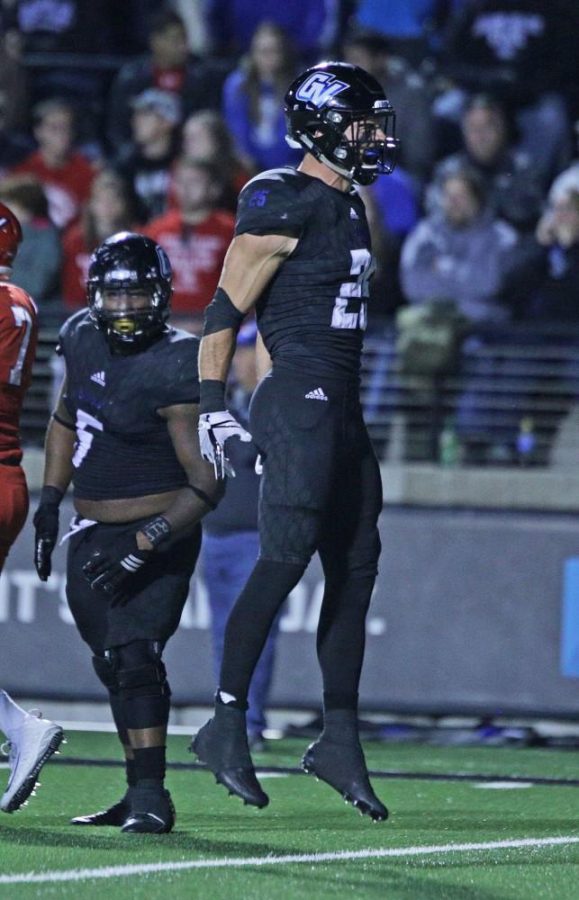 The No. 7 ranked Grand Valley State University football team defeated Saginaw Valley State in the annual Battle of The Valleys this past Saturday, Oct. 2 at University Center. Coming into this matchup, GVSU led the all-time series with SVSU by a 38-11 margin and have won eight straight games in the series.

With a lot of emotions and rivalry tension in this game, the first quarter started just as everyone thought. The GVSU offense came out on their drive early in the first to score the first touchdown in the game after senior running back Bryce Young-Walls’ 28-yard run. The Lakers took an early 7-0 lead.

SVSU would then score late in the quarter with a 37-yard field goal to get on the board, closing GVSU’s lead, 7-3.

The GVSU defense has been stifling all season long and it continued to be great in Saturday’s game. With 49 seconds left in the first, sophomore linebacker Abe Swanson was able to get his first interception of the season and take it 45-yards to the end zone for a touchdown, extending GVSU’s lead, 14-3.

Along with the defense, GVSU’s special teams’ unit has been very special. With about 9 minutes left in the second quarter, senior cornerback, Allante Leapheart blocked a field goal attempt by SVSU and took it to the house for six, making the Laker’s lead even bigger at 21-3.

With less than two minutes left in the first half, sophomore quarterback Cade Peterson threw a 37-yard touchdown pass to freshman wide receiver Kyle Nott after a seven-play, 85-yard drive for a 28-3 lead.

Right before the end of the half, SVSU quarterback Matt Considine threw a 34-yard touchdown pass to receiver Casey Williams to cut into the GVSU lead, 28-10.

The second half started out as a defensive battle as neither team was able to put points on the board to start. But with 2:08 left in the third quarter, Peterson was able to find open field and ran in a 1-yard run to score, extending the GVSU lead even further, 35-10.

To open the fourth quarter, junior receiver, Scott Cooper caught a six-yard pass from Peterson for another touchdown, capping a seven-play, 44-yard drive to grow the Lakers lead even further, 42-10.

With desperation starting to kick in for the Cardinals, their offense was able to put together a 10 play, 75-yard touchdown drive. Quarterback Colby Newberg threw a 26-yard pass to receiver Isaiah Johnson-Mack for the score, cutting into the GVSU lead once again, 42-17.

Even with a big lead, the Lakers were still pushing on the gas pedal. In one play, sophomore backup-quarterback Cal Endicott threw a 45-yard bomb to redshirt freshman receiver Cody Tierney for his first collegiate touchdown, officially making the game out of reach for SVSU, 49-17.

“We were confident in the run and pass game, we felt like there’s nothing we couldn’t do which is an awesome feeling when you’re the quarterback,” Peterson said.

The Lakers will continue their undefeated season next week in a home matchup against Northwood University at Lubbers Stadium.

“We don’t want to get to ahead of ourselves,” said coach Matt Mitchell. “We played well this week; no turnovers on offense. We’re gaining confidence and we’ve had two straight road wins now and we’re excited to get back home at Lubbers Stadium for Family Day.”

The unstoppable season for the football team will continue on Saturday, Oct. 9 at 7:00 p. m. for their fourth home game and their second game in the GLIAC play.