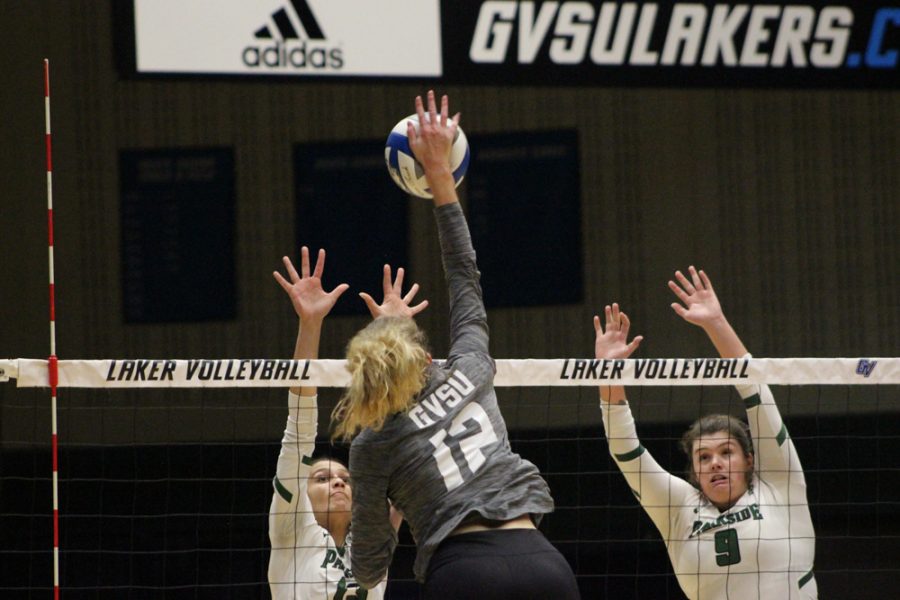 After four consecutive weekends on the road, the Grand Valley State University women’s volleyball team had its first home match of the season this past Saturday Oct. 2, as they faced the University of Wisconsin-Parkside. The match was the first time since the 2019 season that fans were able to attend a home volleyball game, after no spectators were allowed into the games during the 2020 season due to COVID-19.

“It feels awesome to be back at home and with the stands filled because it’s been well over a year since we’ve been able to play at home with everyone in the bleachers supporting us,” said junior outside hitter Ali Thompson. “It just adds another level to the games and makes it that much more fun, exciting, and energetic.”

The first set was tightly contested, as neither team could pull away and gain a true advantage in the set. The Rangers called a timeout down 18-16 late in the set. Out of the timeout, the Rangers scored five consecutive points and were leading the Lakers 21-18, forcing GVSU coach Jason Johnson to call a timeout of his own.

With the score tied 23-23, Thompson had a huge kill that gave the Lakers a one point advantage.

“We really focus on having the mindset of being confident,” Thompson said. “Just going out knowing that you have to be aggressive and take swings to win games and knowing that my teammates have trust in me and I have trust in them to do the same things in those situations.”

Following the kill by Thompson, fellow junior, Kaily Grulke, finished off the set for the Lakers with a kill off an assist from sophomore setter, Rachel Jaqcuay, giving the Lakers a 25-23 victory and 1-0 advantage over the Rangers early in the match.

After an intense first set, the second began in a similar fashion. Every time it looked like GVSU was going to pull away, the Rangers would fight their way back into the match. The Rangers pulled within three points with the score at 17-14, but then the Lakers took over at the end of the set, going on an 8-3 run and winning the second set 25-17.

Heading into the third set, the Lakers made a major adjustment to the lineup. Johnson moved junior outside hitter, Abby Graham to libero. The adjustment was made to try and get some other players playing time who had been performing well in practice but hadn’t been getting much playing time in the games.

It was a change that worked out well for Johnson and the Lakers, as they got off to a hot start, getting out to a 5-0 lead over the Rangers to begin the third set and never looked back. GVSU won the third and final set 25-10. The Lakers never trailed throughout the second or third sets.

Defeating Parkside was not only the first home win of the season for the Lakers but the first career home win of Johnson’s head coaching career at GVSU.

“I think the win alone feels good,” Johnson said. “To be honest, we are so far into the season now that I don’t even pay attention if we are at home or on the road. I think we are trying to focus on taking one match at a time and where we’re heading and where we are trying to get to, but again, really pleased with the performance of our kids.”

Thompson led the way for the Lakers, finishing with a match-high 12 kills while adding nine digs. Sophomore middle blocker, Jaelianna Primus, had a strong showing, contributing with nine kills and four blocks and Jaqcuay chipped in with 34 assists. Sophomore outside hitter, Lisa Sulivan, recorded six kills and three blocks in the win.