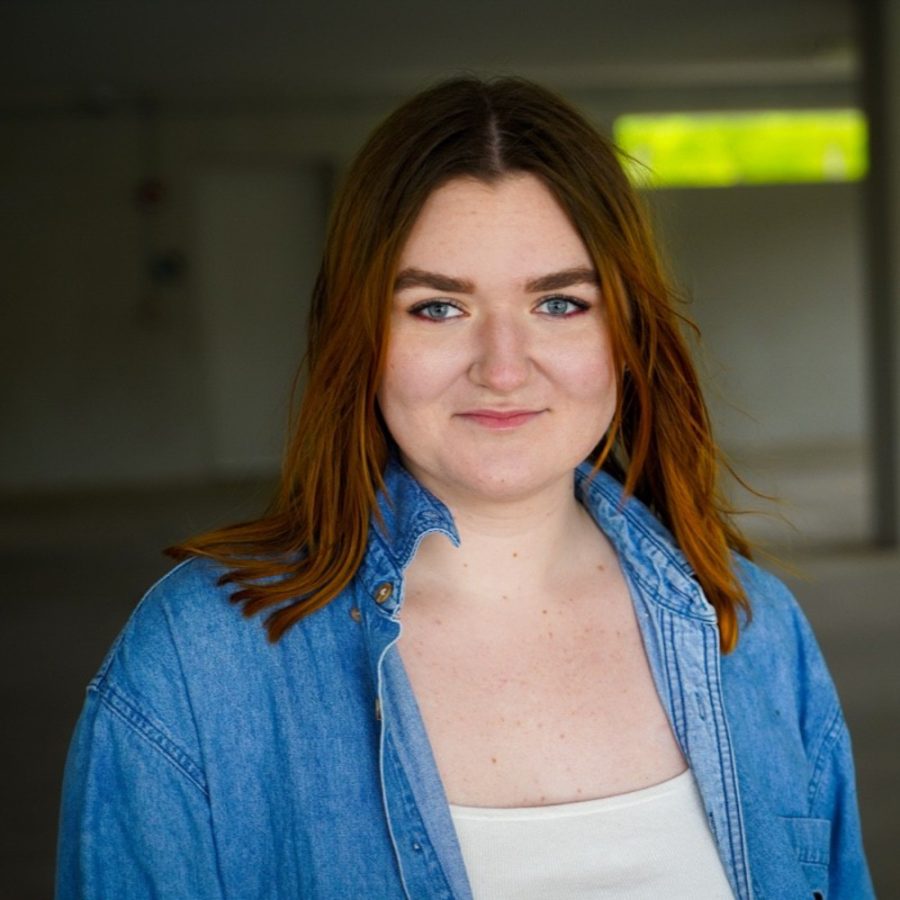 Grand Valley State University alumna Breana Malloy graduated in the spring of 2021 with a film and video degree and is now a producer at a video production company in Grand Rapids, as well as a freelance producer.

While Malloy’s passion for film and video is blazing now, it took some time for it to develop.

Growing up Malloy said she loved watching movies and being a part of the arts, especially in the form of music. She participated in choir, learned how to play the guitar, and took part in theatre productions.

During her senior year of high school, she realized that life in front of the camera or on the stage wasn’t for her. However, she still wanted to be a part of the process.

Malloy began her freshman year as a film major at GVSU and hasn’t looked back since.

“I got lucky when I came to Grand Valley and started in the film major because I just enjoyed it so much,” Malloy said. “It was an action-packed three to four years for me when I was in college because I learned everything.”

Malloy said during her freshman year she learned much of the basics of film production.

As she progressed through the major her sophomore and junior year, she said she started taking theory classes and making films and it taught her who she was as an artist.

She said GVSU’s film program has a unique way of combining all parts of the film-making process into the required criteria for the major.

“A lot of schools don’t do what Grand Valley does with film programs,” Malloy said. “A lot of them are more theory-based or more production-based programs. Grand Valley has a good structure of both, and so for me, the theory was just as important as the hands-on experience because you learn who you want to be as an artist and what you want to make and it informs your actual on-site experiences.”

Through the discovery of her own artistic preferences, Malloy realized she wanted to focus on representing gender studies and people of color accurately through her films.

This led to her taking numerous classes to inform her artistry, some of which being law classes, human trafficking classes, and classes in the Women and Gender Studies program.

One of Malloy’s largest endeavors while at GVSU was working as a professional producer for the Summer Film Project her senior year. She said that GVSU provided her with every tool she needed to succeed, it was just up to her to put it together.

“I knew what I had to do but I had never done it before, so it was a really great hands-on experience instead of a speculative one,” Malloy said. “I just had to do it.”

Malloy credits much of her inspiration and her knowledge today to her classmates and her professors, especially Visiting Professor Joel Potrykus.

“(Potrykus) instilled a lot of confidence in me as a student and as a producer,” Malloy said. “When I was in school, he’d say, ‘You’re already a producer. You’re not going to be a producer, you’re a producer,’ and that mindset made all the difference to me. I think Grand Valley has great professors like him.”

Malloy said she learned three elements of being a good producer at GVSU that she would like to extend to students, those being: having a combination of business and industry knowledge, building interpersonal relationships, and working on personal growth.

She said knowledge of the business comes from classes taken and experience in the industry, but interpersonal skills and personal growth are something that takes a good measure of self awareness.

“On set you absorb everyone’s stress and you have to deal with everyone and make sure everyone is feeling okay, they’re at their best, they’re ready to shoot,” Malloy said. “Working on yourself is so important or else you’ll crumble under the stress of it all.”

Another thing Malloy said she wanted to share with students was that on her road to success, she had to learn how to handle rejection.

“The biggest thing in succeeding and getting where you want to be is just putting in the work and being okay with getting rejected a lot,” Malloy said. “I get rejected a lot still. I was really down for a two week period because I was just getting rejected all the time. I was like, ‘I know I have something. People tell me I have something and I believe it.’ I just kept going and if you’re good at something you will get your breakthrough.”

Today, Malloy works as a producer for Ingalls Pictures in Grand Rapids and has already worked on 10-15 different projects ranging from commercial work to music videos, brand videos, commercials, shorts, and a book trailer.

She said her main focus while at work is talking to clients, sending emails, keeping communication running, making schedules, and making sure that every film or commercial being made is moving along.

“It’s a family business, very family-oriented, it’s beautiful in person,” Malloy said. “Everybody just feels like family. Three brothers work here, their dad works here, and I was just on the phone with their mom and she said, ‘You just fit in from the minute you got here.’ It’s just been really fun. I hopped in and I fit in.”

As for her freelance work, Malloy currently has three projects in post-production, as well as the Summer Film Project at GVSU “Thing From the Factory by the Field” to premiere in April 2022.