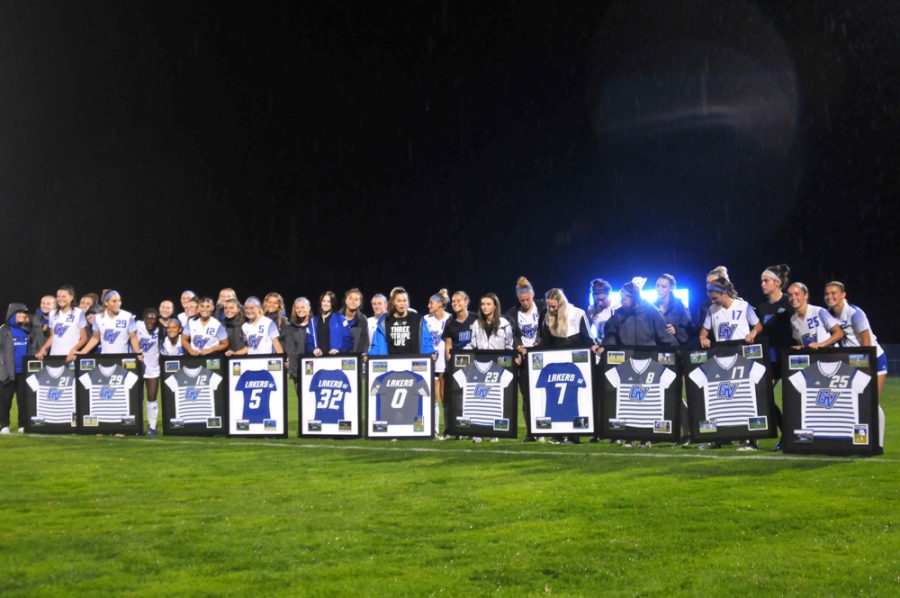 The Lakers wasted no time on senior night to take the lead as freshman forward, Taylor Reid, found the back of the net only seven minutes into play on an assist from sophomore forward, Kennedy Bearden. Shortly after in the 17-minute mark, senior midfielder, Maddie Knaggs, made it 2-0 on an assist from senior forward, Catie Baron.

DeLoach scored again with an assist from junior forward, Amelia Wampler, giving DeLoach the hat trick in the first half of play and making it 5-0.

The second half began just like the first for the Lakers, as Knaggs scored her second goal of the match, giving Baron her third assist, pushing the Lakers’ lead to six. Knaggs wasted no time getting the second hat trick of the game for the Lakers as she scored minutes later on an assist from senior defender, Cecilia Steinwascher, making it 7-0.

Junior midfielder, Darlene Radamaker, joined the action in the 56-minute mark of play with a goal with an assist from Carranza growing the lead to 8-0 and finish off the scoring for the Lakers.

Although coach Jim Conlon hasn’t spent much time with this graduating class, he is a former college player himself and knows how meaningful nights like these are for his players.

“I think senior recognition is always a special night,” Conlon said. “Because it’s a night that is brought to the forefront for all of their sacrifices and investments over four years– for many of them in college, over the last ten to fifteen years from club ball. So, to have your teammates support you, congratulate you, your loved ones around, former teammates, current teammates; that’s really what it is about to have that moment of someone essentially saying thank you for their actions–for everything they’ve done.”

Steinwascher, one of the most decorated seniors on the roster, has started in an almost record-breaking amount of games (90), and was a key player in the national championship, so for her, tonight was a special one.

“It means a lot,” Steinwascher said. “GV has become a part of me and I’m proud and happy to be a part of this program for the last five years. COVID sucked but I’m glad it gave me another year to continue to do what I love and be around the people that I love.”

After a 2-2 tie with Ferris State University, the Lakers were looking to get right back on track to their winning ways and knew that they needed to start this game off with a statement. They did just that.

“I think it was really important and I’m really proud of this team and the way we responded from last weekend,” Steinwascher said. “We talked about imposing will, and we did that this week.”

For the No. 1 Lakers, they will now be traveling to Saginaw Valley State University in another Battle of the Valleys conference match on Oct. 15, looking to continue keeping their loss column empty and bringing home another win.