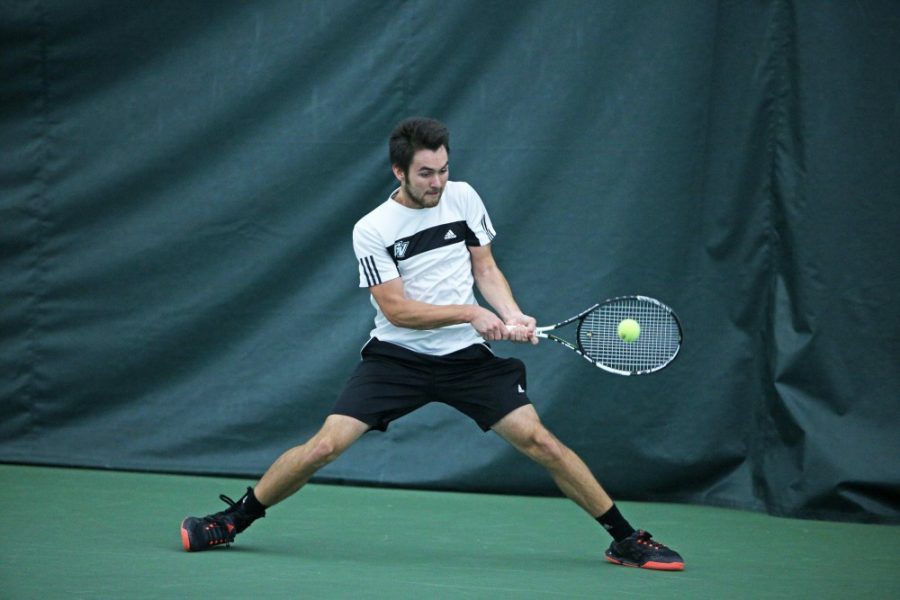 The Grand Valley State University men’s tennis team matched up against Cornerstone University at Grand Rapids Racquet and Fitness Friday, Oct. 8. The team won the match 6-1, improving to 2-0 on the season.

“(A factor of the victory) was our preparation,” said coach Samantha Schall. “We came in very prepared, we had a good week of practice, and nobody was expecting it to be easy. We won convincingly and everybody that got the chance to play got a win.”

During the doubles portion of the match, the team swept all three of their games. Graduate student Josep Canyadell and senior Sebastian Arce took victory in the first place spot with a score of 6-4. Winning the second-place spot were senior Jack Dausman and junior Sean Miller, outscoring the Cornerstone team 7-6. The third-place spot was taken by sophomore Freddie Cossio and senior Martin Matov, posting a 6-3 victory. Through two matches this season, the team has yet to drop a doubles match to their opponents.

Dausman has been a staple of the team since his freshman year, being named a GLIAC All-Academic member in the 2019-2020 season and the 2020-21 season. He looks to build on those performances this year after all that he has done in the last four years.

“My game has improved in all areas,” Dausman said. “My mechanics on each stroke are better, my serve has gotten stronger, but the greatest improvement is in my mental toughness. I am much more disciplined and I play a much smarter game.”

The singles portion of the match was dominated by GVSU. They took five positions in straight sets, meaning they did not lose a game in any of their sets. Canyadell snagged the first place position, winning 6-3 and 6-1 in two sets. The second-place position was taken by Miller, as he won 6-4 and 6-1 in his two sets. Matov, Tomas Oliveira, and Kushan Shah won the fourth, fifth, and sixth positions respectively.

“I was impressed by how prepared the team was to play,” Schall said. “There was a lot of intensity and it was our first home match. The guys were ready to go and took advantage of the opportunity to compete.”

While preparation played a major role in the victory and has been a strong point for the entirety of the season, the team’s mental preparation is just as important as physical.

“I prepare before every match by taking 5-10 minutes to get into the right state of mind,” Dausman said. “Our physical preparation as a team before matches normally does not last long, but we run, stretch, and play before we compete.”

This win keeps the team undefeated with only one match remaining in the fall portion of the season. The team hosts Grace College on Friday Oct. 15.

“We are motivated to finish undefeated, we want to be 3-0 before we hit the break,” Schall said. “We have a great routine of training during the week. In order to stay undefeated, we need to be prepared and ready to perform very well this weekend.”

The women’s team did not compete last weekend, but they return to the courts on Saturday, Oct. 16 as they travel to Valparaiso, Indiana for their final game of the fall.