The Pyramid Scheme celebrates, reflects on a decade of success 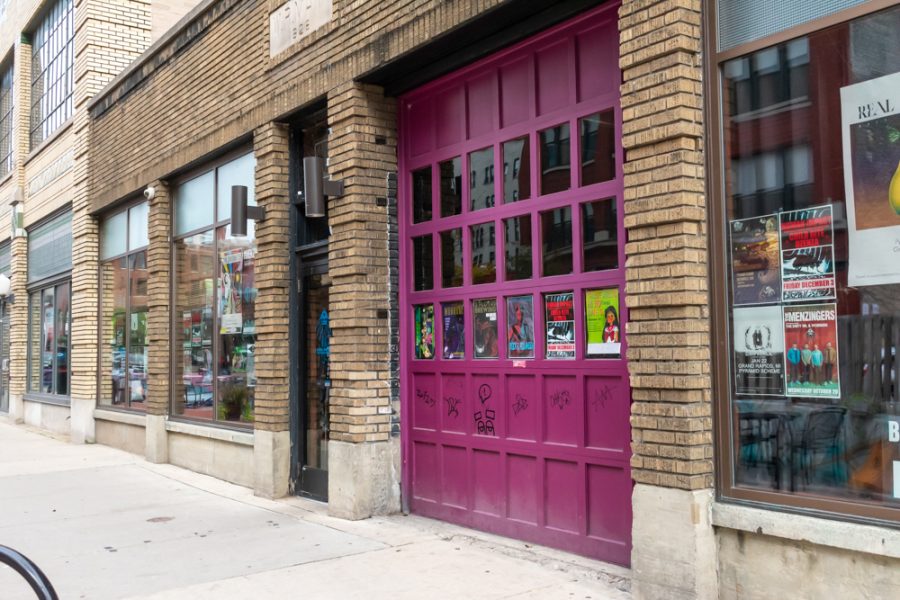 The Pyramid Scheme is a bar, a music venue, and a pinball arcade rolled into one hot spot in the Heartside Neighbourhood in downtown Grand Rapids.

As The Pyramid Scheme was unable to celebrate its 10 year anniversary in April 2021 due to COVID-19 restrictions, the venue will now be raising a glass during their sold-out show on Oct. 20 featuring performances from The Menzingers, The Dirty Nil, and Worriers.

With their cheers to 10 years has come some time for reflection for co-owner Tami VandenBerg.

She and her brother, Jeff VandenBerg, had originally opened a neighborhood pub called The Meanwhile on Wealthy Street in Grand Rapids.

The two were very interested in live music, but Tami VandenBerg said the pub was a bit too small, and the neighbors were not very enthusiastic about the idea.

She said as soon as the pub turned over a profit, they bought their current residence and the idea for The Pyramid Scheme was launched into action.

However, the building wasn’t as ready for the brother and sister duo as they were for it.

Before the two fixed it up in 2011, the building had housed a dance club in the 90s and early 2000s. It had been vacant for many years and was full of mold. Numerous times, the city had wanted to tear it down.

“We had to get very serious people in here to get rid of all of that,” Tami VandenBerg said. “It was in really, really horrendous condition. I understood why people wanted to knock it down, but the bones were good. It was all brick and cement so we took it down to the bone and rebuilt it how we wanted it.”

Despite this, the building’s long history before the dance club and The Pyramid Scheme is actually what led to it being perfect for the VandenBerg’s.

“What’s great about that is they reinforced the roof so intensely that we don’t have any giant poles or barriers,” VandenBerg said. “To find a building this size where there aren’t support beams throughout it that would obstruct peoples’ views is virtually impossible, so the fact that that’s what it is is very beneficial to our business.”

The front bar is only open to those ages 21 and older. However, the concert venue is open depending on the artist’s preference for the show. Most shows are 21+, but some are 18+ or all ages.

VandenBerg said the venue doesn’t focus on a specific musical genre. They pull artists from the regional and local scenes.

“It’s a fascinating sort of chain,” VandenBerg said. “We’re trying to get the bigger acts…Anyone we think might be interested in playing we’ll pursue. Then while we’re pursuing them, smaller acts, particularly local acts but also tours from all over the country, are pursuing us. So it’s a bit of a dance.”

VandenBerg said for six or seven years, the venue has hosted “LadyFest,” a festival focused on people that identify as women. There is a musical component, panels, and a variety show for performances.

The West Michigan Cannabis Guild rents the venue for their meetings and panels as well.

The venue also displays artwork from local artists throughout the space, some of which is for sale.

“(My brother) Jeff is an incredible artist,” VandenBerg said. “He painted the mural on the side of our building and designed almost all of our shirts. A lot of the artwork we have is his, along with lots of other local and national artists. We’ve always just been super interested in art and music.”

Another of The Pyramid Scheme’s biggest crowd generators is its collection of 24 pinball machines in the front bar.

“That is all Jeff,” VandenBerg said. “He probably knows more about pinball than anyone in the state. I’ve been told this is one of the best pinball collections that exist all in one place… It brings a lot of people in and Jeff loves it.”

The Pyramid Scheme hosts The Grand Rapids Pinball League which was started in 2012 by Rodney Minch and Jeff to provide an opportunity for individuals to play competitive pinball.

The league is open to anyone at any skill level and meets on the first and third Wednesday of every month. Tournaments are also held monthly. Those interested in joining are encouraged to message the scheme’s Facebook page or email them at [email protected].

VandenBerg said throughout the past 10 years, her focus on building a diverse, inclusive community is something that she is most proud of.

“We’re always trying to get more diversity in terms of our performers which is a challenge,” VandenBerg said. “When I opened this up I immediately realized how few women were on stage…and same with different races. One of the things I’m trying to do and I hope to do even better is really make sure that everybody is represented on the stage, including the LGBTQ community.”

She said her main focus is having the staff and the stage mirror the people in the crowd.

“We ask, ‘How do we make the stage as representative as possible of the greater community?’” VandenBerg said. “We’ve worked hard on it and I think we’ve done a good job, but I think we can still do better.”

VandenBerg said guests have been very vocal about their love for the inclusivity of the venue.

“I think people really appreciate the intimacy of it and the music that we cultivate,” VandenBerg said. “I hear a lot that people say this is one of the only places they feel more welcome because we’re very openly progressive… we work extremely hard to make our staff very diverse so that people come in and see people that look like them and then they feel more at home.”

She said that she is proud to have created this atmosphere and to have a hand in the music community of Grand Rapids.

“I’m really proud to be a part of building the music scene,” VandenBerg said. “For me, I don’t want to be in a city where there isn’t great music. We’re pretty lucky for a city of this size that the caliber of musicians we have is pretty remarkable. I want to continue to do whatever I can to cultivate that.”

VandenBerg said due to COVID-19 the venue has been able to expand to outdoor seating, and she hopes that this will become permanent. She also said the venue is looking to coordinate with a food truck in the future.

Tickets and show guidelines are available for viewing and purchase on the Scheme’s website.