GV Volleyball has near perfect weekend at Midwest Region Crossover 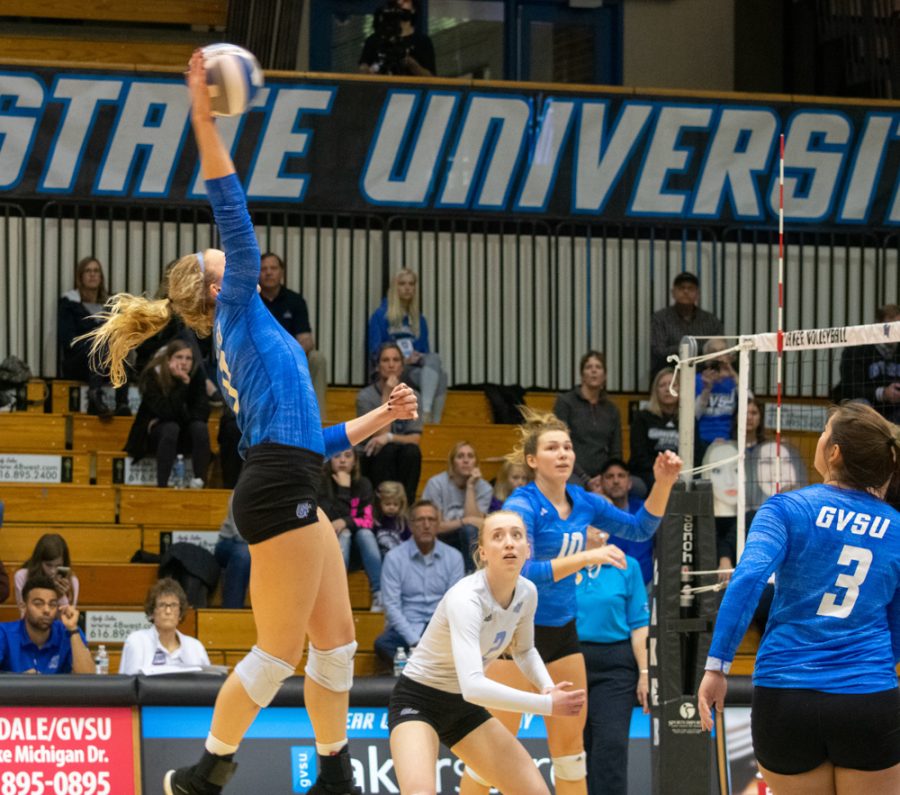 “Honestly, we kept our training short this week,” said coach Jason Johnson. “We had kids out due to illness and with a short week after playing on Sunday (Oct. 10), we didn’t make any big changes.”

The first set started in a back-and-forth fashion, neither team separating themselves early on. With the score at 19-15 in favor of the Lakers, senior middle blocker, Jayla Wesley, had a key block to begin a 6-1 run for the Lakers to close out the set, giving GVSU a 1-0 lead over the Panthers.

That momentum carried forward into set two, as the Lakers got out to a quick 8-1 lead. GVSU continued that dominance throughout the rest of the second set, defeating the Panther 25-13.

Set three was a continuation of the previous set as the Panthers struggled to keep up with the Lakers. Another quick start for GVSU got them out to a commanding 15-4 lead. The Lakers never looked back, winning set three 25-12 and sweeping the Panthers 3-0.

“(Prior to the match) we talked with our kids about focusing on themselves, bringing an intentional focus to the gym every day, whether competing or training,” Johnson said.

Following the sweep, the second and final match of the day for the Lakers came against the University of Indianapolis. The Lakers found themselves in a similar situation at the end of the first set, leading 18-16 and looking to pull away from the Greyhounds.

Junior outside hitter, Ali Thompson, set an impressive 7-0 run in motion for the Lakers with a kill that came off an assist from sophomore setter, Rachel Jacquay, to give GVSU a 25-16 victory in the first set.

Again, using the momentum from the previous set, the Lakers took a 2-0 lead over the Greyhounds after a dominating 25-7 win in the second set. The Lakers were able to get their second sweep of the day, as they took care of business in the third set as well, defeating the Greyhounds in a close 25-22 closeout set.

“I thought our kids did a great job today of taking care of the little things and keeping the focus on our side of the net,” Johnson said.  “We made a couple changes to our lineup and thought those players did a great job adding to our team dynamic on the court.”

Moving into Saturday, Johnson said the key for his team to continue its success was to stay focused on the little things, stay connected as a team, and for all players to be ready if their numbers were called.

Thompson helped lead the way for the Lakers, finishing the weekend with a total of 31 kills and 40 digs. Junior outside hitter, Abby Graham, added 30 kills and 41 digs, sophomore middle blocker, Sarah Wight, chipped in with 29 kills, four blocks, and two digs, while Jacquay dished out a total of 122 assists on the weekend.

With the victory over USI, it concluded a perfect 3-0 weekend for the Lakers, only losing one set over the course of those three matches. The three wins boost GVSU’s record to 12-7 overall and 5-3 in the GLIAC.