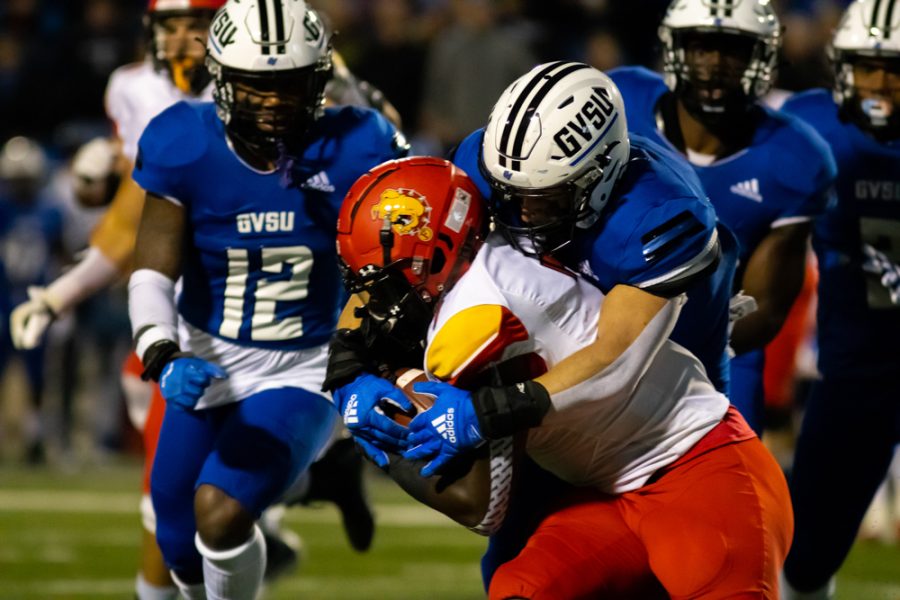 For the fifth year in a row, the no. 6 Grand Valley State University (5-1) football team lost the annual face-off against no. 3 Ferris State University (6-0) in a devastating final result. GVSU had lost the past four matchups against FSU, this time being defeated with a final score of 35-28.

On the first drive of the game, GVSU sophomore quarterback Cade Peterson capped off an impressive nine-play, 70-yard drive with a 33-yard rushing touchdown.

Tied at 7-7, the Lakers offense was hot. Their running game couldn’t be slowed down led by Peterson and senior back Bryce Young-Walls. Peterson was impressive all game using his legs to avoid FSU pass rushers and to move the chains. On the end of their second drive however, Peterson was picked off after throwing a pass into a crowded FSU secondary.

Reeling from their first turnover of the game, the Lakers were helped out by the record breaking crowd in Lubbers Stadium. 17,007 fans helped distract FSU’s offense when they were flagged an unbelievable four times in a row due to false starts.

Unfortunately for the Lakers, FSU was able to gain a new set of downs after chipping away at their 1st and 30 starting position. In the first half, GVSU’s defense struggled with tackling and stopping FSU on third downs. Ferris State’s receivers were also able to find holes in the Lakers secondary. Bernhardt was especially effective in the play action game as well as scrambling for first downs. FSU’s second drive of the game ended with a touchdown to take a 14-7 lead.

FSU’s next drive in the second quarter ended differently for GVSU. Junior DB Jon’Tavous Webb had an impressive interception to give the ball back to Peterson and the offense, and the chance to tie the game before the half ended.

Peterson effectively led the offense down the field both on the ground and in the air. Peterson’s tight spiral to junior WR Jacob Miller put the Lakers in excellent position to score at FSU’s 1-yard line.

Disaster struck once again when sophomore RB Tariq Reid fumbled the ball at the goal line. FSU was able to pick the ball up and run it back 99 yards for the score, resulting in the first half ending at 21-7.

“One of those games that’s pretty frustrating just from a standpoint offensively,” said coach Matt Micthell. “We had to punt a couple times and I definitely felt we were running the ball and doing some things well, but we got down to the red zone, we turned the ball over, and one of those turnovers led to a touchdown.”

The tension between GVSU and FSU was present the entire game. The aggression became visible between the rival teams after a blindside play on the fumble return resulted in a small fight that broke out on the field at halftime.

This and other incidents such as hard double teams on punt returns, personal fouls and facemasks committed by FSU, resulted in 16 penalties for 128 yards throughout the game. Despite the undisciplined play style from the Bulldogs, GVSU was able to keep their composure entering the second half of the game.

“We were stopping ourselves,” Mitchell said. “We punted once in the first half, three turnovers, two inside the ten, the guys (had) some confidence because we were moving the ball. We said stick with it, get some stops on defense and get rolling, and I thought our offense did.”

At the beginning of the second half, the Lakers defense was hitting their stride. On a 3rd and long play however, Bernhardt escaped GVSU pressure, scrambled out of the pocket and completed an across the body throw to the middle of the field. FSU’s receiver, along with some timely blocks, was able to run the ball down to GVSU’s redzone. Ferris State scored on that drive leading the Lakers 28-7.

Despite their hole, Peterson and the offense impressively climbed back into the contest with two straight scoring drives.

The Lakers aggressive style paid dividends as Peterson led the team on a 11-play 59-yard scoring drive, which included a critical first down on a 4th and 4 play at the 30-yard line. The drive was capped off with a remarkable throw by Peterson to Young-Walls as he streaked into the corner of the endzone.

GVSU’s defense helped out their offense by forcing FSU to punt after a three-and-out drive. Ferris State gave the Lakers excellent field position after a shanked punt.

With short field position, Peterson and the offense once again capitalized.

FSU was basically unstoppable on third down the entire game. They converted seven out of 12 attempts and converted three of them late in the fourth quarter. After a fake field goal attempt, FSU back Tyler Minor ran into the endzone seven yards out to make the score 35-21.

GVSU would score one more time on a last resort play by Peterson. Peterson dropped the ball, picked it back up, avoided pressure, threw the ball to Rison who was doubled covered and the ball miraculously ricocheted off a Ferris DB’s hands right into Rison’s arms.

“I give our team a lot of credit– down 28-7, things didn’t look good but we had a lot of fight,” Mitchell said. “Heck of a football game; there’s going to be a lot of growth from this. There’s definitely a lot left to play for. We’re pretty down, pretty frustrated because I give Ferris a lot of credit, but we made some mistakes.”

By the end of the game, the record-breaking number of fans had remained strong especially in the student section despite the unfortunate end for the Lakers.

Next week the Lakers take on Northern Michigan University (3-4) for their third away game of the season, looking to make some of the changes that they needed in the Ferris game. The Lakers have four more games left in their regular season before they begin the NCAA Playoffs.