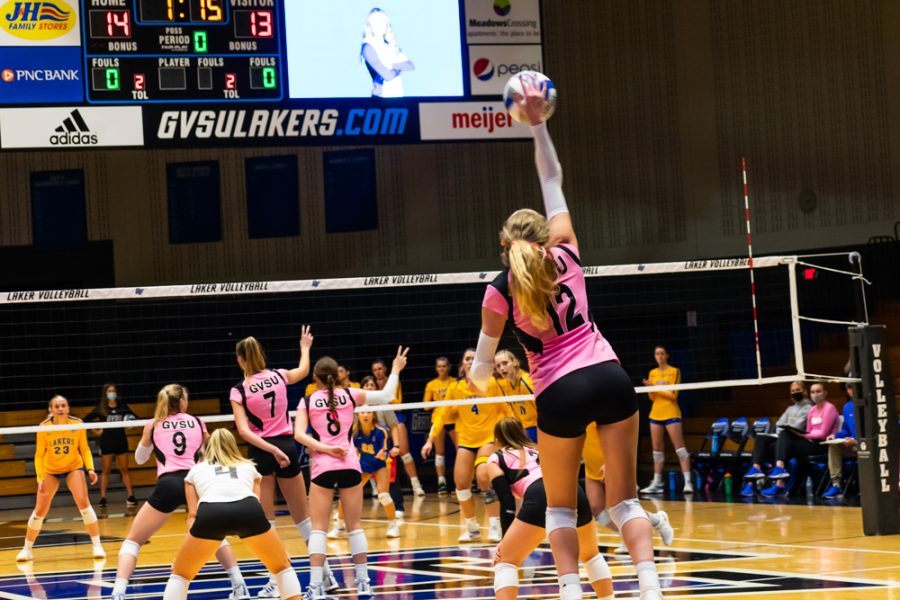 After a dominating weekend for the Grand Valley State University women’s volleyball team (13-7) in Indiana two weeks ago, the team returned home this past Friday, Oct. 22 to resume GLIAC action against Lake Superior State University (2-17).

The match was the annual “Dig Pink” game, where GVSU wears their pink jerseys in support of Breast Cancer Awareness Month.

Graham and her fellow junior outside hitter Ali Thompson helped lead GVSU in a close first set, which came down to the very end. With the score at 23-21 in favor of GVSU, LSSU scored on consecutive plays to tie the set at 23-23. GVSU coach, Jason Johnson, elected to not take a timeout despite the momentum swinging in the opposite direction.

“There have been multiple times this year that I’ve been in that situation, and to be honest, I really like our kids figuring it out on their own,” Johnson said.

It was a decision that worked out for Johnson; on the following play Thompson had a kill that gave GVSU a 24-23 advantage. With the potential to close out the set, the junior duo finished it out strong for GVSU, as Graham had a dig that led to a Thompson kill that was assisted by sophomore setter Rachel Jacquay to win the first set of the match.

“I know if I get a good up that she’ll (Thompson) put it away and I know that my teammates will do their jobs too,” Graham said. “It’s just doing our own jobs and focusing on putting the game away.”

With the score at 6-4 in the following set, Thompson had a pair of back-to-back blocks which gave GVSU momentum early in the second set. GVSU used that momentum to get out to a commanding 20-11 lead and finished the set on a 5-1 run to defeat LSSU 25-14 and give themselves a 2-0 advantage in the match.

Momentum carried with GVSU as they controlled the majority of the third set. However, LSSU made the set competitive, scoring five consecutive points to cut the GVSU lead to 24-22. Graham put an end to the LSSU run with a kill that gave GVSU a 25-22 win and closed out the sweep.

“I think we were definitely feeling a little bit of the pressure,” Graham said. “Haley Blaney was doing a great job getting great passes, so we knew it was on us three hitters to put the ball away. We really just stayed composed, trusted each other, and stepped up to do the job and finish the game.”

Thompson led GVSU in the match with 12 kills, 15 digs, and three blocks. Graham added nine kills, 13 digs, and one block. Sophomore middle blocker Sarah Wight chipped in with nine kills and two blocks, while Jacquay dished out 31 assists in the sweep.

“I felt like in the first set, we did not do a good job of controlling the ball on our side,” Johnson said. “I thought our offense was sloppy, I thought our ball control was sloppy, but I felt as we moved along that we got under control a little bit better. We were able to get other people into the game and they made an impact while they were in there.”

Following the sweep, GVSU advances its winning streak to four and moves its GLIAC record to 6-3 on the season. The Lakers have now also won 12 of their last 13 sets.

Looking ahead, the Lakers are set to have a rematch with rival Ferris State University next Friday, Oct. 29, at 3 p.m. GVSU lost to FSU earlier in the season in a close five-set match. The Lakers will then play their final home match of the season against Davenport the following day, Saturday Oct. 30, at 4 p.m.