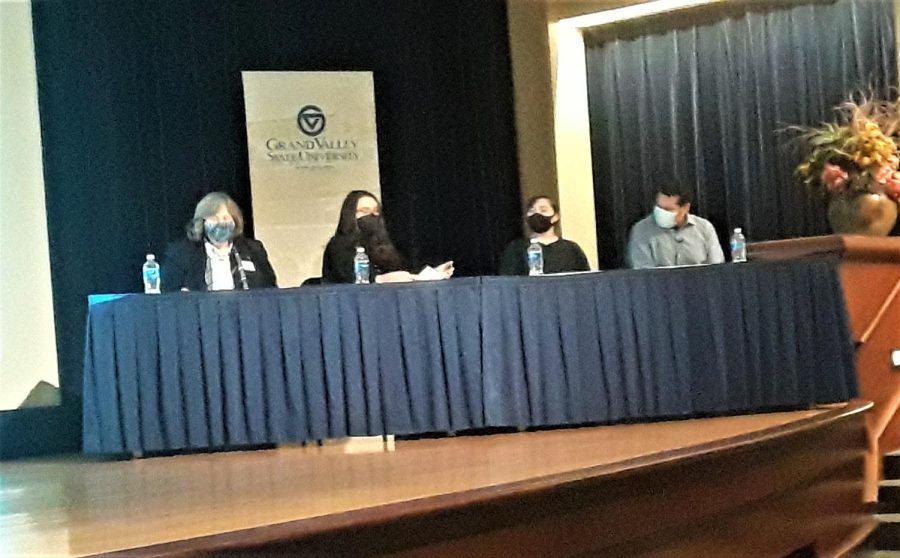 Last year, the History Department of Grand Valley State University took an absence from their usual hosting of the Great Lakes History Conference, a tradition that’s lasted for nearly forty years. This year, on Friday Oct. 22 and Saturday Oct. 23, they were back on, with scholars coming in from across the United States to share their research on “sociability.”

“When Dr. Peter Dobek built it initially, to propose a conference on the history of sociability, I had no idea, none of us did, that it would take two years to realize,” said History Department Chair Michael Huner during the opening keynote. “Of course, we also had no idea that it would be so appropriate and needed at our current moment, as we’re learning new ways to socialize, and definitely need to recover ways that we’ve socialized in the past.”

What exactly counts as sociability? The conference defined it as human interaction, existing within realms like the material (involving things like trade, food and drink, sports), the hierarchical (courtly decorum, the theatre state, competition), and the communicative (literature, class belonging, gender). The topics covered over the course of the two days spanned from the social lives of medieval hermits, to the changing beer culture of the information age, to the complex social intricacies of samurai tea parties.

“What’s so interesting about these palaces that were constructed in and around Kyoto is not just the built in features that have become permanent parts of Japanese traditional architecture, but that they really speak to the role of sociability in the politics and lives of these samurai rulers,” said Dr. Morgan Pitelka of the University of North Carolina during his presentation. “For example, the sliding paper windows can be used to frame the garden outside and bring it into the interior as a form of decoration. This allows the scenery of seasonal change, which is so important in Japanese art and literature, to be brought into the center of the gathering as a framing device. Spring is associated with the beauty of new life; fall, meanwhile, is associated with the inevitability of death.”

The conference’s panels were divided by era (Medieval, Early Modern, Modern, and the Internet Age), with all four sessions each featuring panels of multiple researchers presenting on a diversity of cultures and locations. Breaking from this format was the last session, a standalone presentation on “The Pretzel as Commensality: Breaking Bread and the Communal Table” by William Woys Weaver, an independent food historian and ethnographer, as well as the first, a student panel of three undergraduate presenters from Grand Valley.

“The cocoliztli epidemic appeared first from 1545 to 1548, and then again from 1576 to 1580,” said Isaac Hoekstra, a senior studying Biomedical Sciences. “It’s estimated to have had a fatality rate as high as fifteen million people, but even with new epidemiological information, we don’t know what cocoliztli was. It gives us a moment in the early modern period where medical experts stop thinking of all diseases as the same disease to realize that this is something new. If these physicians were on the edge of differentiating between different diseases, maybe we should change the way we think about indigenous medicine, and give them more credit for their framing of epidemic diseases.”

For those interested in hearing more from Hoekstra, or Pitelka, or any of the fourteen other researchers who presented their research at the conference, all the sessions were streamed online for the benefit of those who couldn’t attend in person. Both days of panels are available on the GVSU History Youtube channel. More information on the Great Lakes History Conference itself can be found on their website at gvsu.edu/glhc.