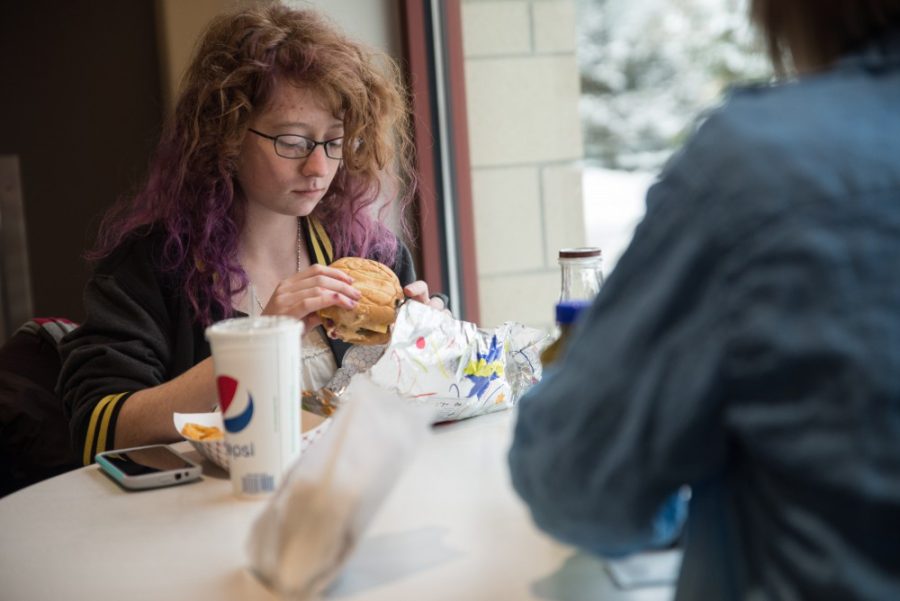 This past Tuesday, campus dining held a Food Committee meeting in Kirkhof for any student to participate in. The meeting sparked productive, yet difficult, dialogue between students and non-student members. The Food Committee holds a “Talk with Campus Dining” meeting every three weeks in order to hear feedback and suggestions from students directly.

An important point of discussion was student input regarding Grand Valley State University’s vegan and vegetarian options. A student struggling with various food allergies spoke on some of these options.

Other students struggled to find fulfilling options at convenient locations for them, one student even opening up about not eating due to the lack of options or “high wait times” for their particular options.

“Some options that students choose do tend to be slower, like the make your own stir fry, while other items have a fast turnover,” said Chuck Brown, Campus Dining Operations Director.

“The reason we don’t have some options readily available is because of the issue of quality,” said Craig Wieschhorster, the Associate Vice President for Business and Finance. “We don’t have a high enough demand for some items to be cooked as frequently as other options, so employees make them upon request so that the food is fresher.”

Students from the advocacy group Students for Food Sovereignty group were among those who spoke at the meeting. One student said the availability of food for students with dietary restrictions may be a reason many students decide not to renew their meal plans after their freshman year.

Alison Cooney, the Registered Dietician Nutritionist at GVSU, offered a possible solution to this, which was well-received by those at the meeting.

“What if we created sampling tables in Kirkhof for potential vegan and vegetarian options?” Cooney said.

Another point of discussion was students’ growing concern for the company that provides dining services at GVSU, Aramark. Many individual students, as well as student organizations on campus, are growing more and more unsettled with GVSU’s association with Aramark and when the members of the Food Committee asked why students are hesitant to work for campus dining, these concerns surfaced.

One student, Bobby Novak, has been researching Aramark for a project in one of his classes. He attended the “Talk with Campus Dining” in order to speak on his concerns and offer some suggestions.

“I think the reason people are a little wary to work for Aramark is because they don’t want to be associated with the prison industrial labor system and because of an overall lack of transparency,” Novak said. “If we knew what was happening surrounding these allegations, people might be more willing to work as student employees. I think people would be happier to buy meal plans even.”

Wieschhorster said he understood Novak’s perceptions and opinion and wants to help build a bridge between students’ concerns and Campus Dining’s initiatives.

“I would only say that everyone needs to have communication and dialogue in order to be informed of all the various things that may be associated with Aramark,” Wieschhorster said. “I think there is some misinformation about Aramark regarding their support for the prison complex because yes, the company does have contracts with prisons; whether you agree with the laws that put those folks in these institutions or not, those folks need to eat and there are great programs that help folks transition out of their recidivism.”

Wieschhorster said he encourages students to ask questions, continue the dialogue surrounding issues brought to the table at this event and have a broader discussion on topics that may be a concern to students. This conversation, however, is only one of the many that have surrounded Aramark on campus this semester.

“This means that they do not contract out their dining operations the way that we do,” Hicks said “Aramark is a ‘middleman’ between GVSU and agricultural companies who sell us our food. Rather than producing the food, Aramark’s job is to control our contracts, train our employees, choose what food we get in from where and how much of it.”

Alex said they do not believe that this system is necessary and asserts that GVSU should transfer to a self-operated system to best serve students. In addition to attending Student Senate meetings and speaking during the public comments section, SFS has created a petition to introduce “real food” to GVSU and has received nearly a thousand signatures.

Hicks, along with other members of SFS, attended the Food Committee meeting on Tuesday and offered new suggestions to staff.

“The Food Committee meetings are important to go to because even though we don’t like Aramark, we still think campus dining operations can improve in other ways,” Hicks said. “We think students deserve good food and a good experience.”

In addition to meetings, students can contact the Food Committee via an email to the campus Dietician at [email protected]. Deb Rambadt, Marketing Director for campus dining, said students can provide feedback by taking the “Dining Survey” on the homepage of gvsufood.com, so the committee can take students’ preferences and suggestions into consideration.

“In the event that any meal is unsatisfactory, students are able to scan QR codes in dining locations for the “Your Voice Counts” survey or use yourdiningvoice.com to take the real-time mobile survey,” Rembadt said. “The concerns from this survey are immediately emailed to the dining location so the problem can be resolved. For instance, if hot food came out cold, they would receive the concern and could turn the food warmers up in response.”