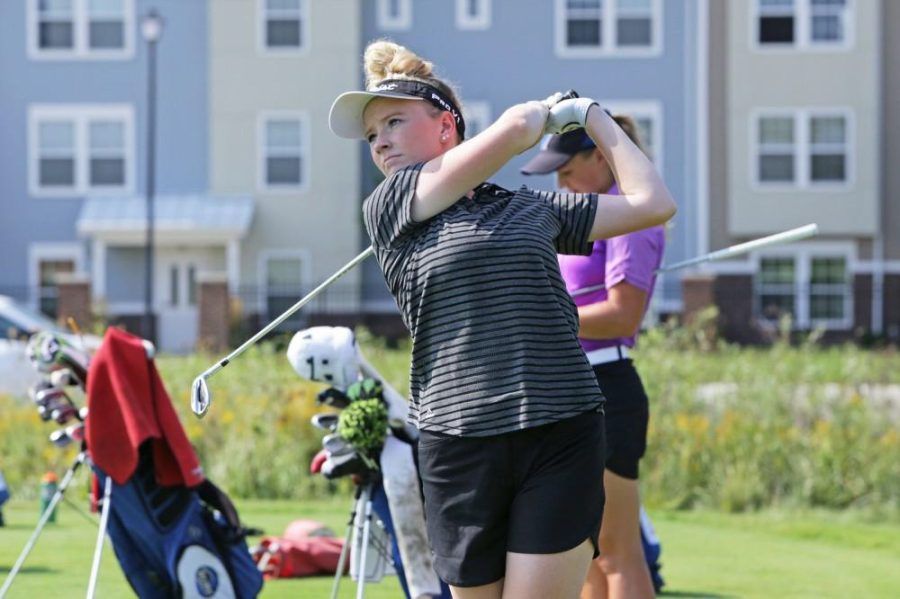 “This has been a semester-long process,” said coach Rebecca Mailloux. “The girls were able to play more aggressively and freely. We got more birdies in this tournament; we had 50 in the top five. We had a lot of big numbers and doubles (bogeys), but when you make a lot of birdies, it makes up for it.”

“As a team, to win four of six tournaments was awesome,” Stoll said. “Being able to contribute to those tournament wins was awesome. I know that if I play a bad game, someone else is playing well and is able to pick me up.”

Freshman Megan Miron was just behind Stoll, finishing the tournament in fifth place and scoring 221 and five strokes above par.

While the team has played many tournaments this season, Miron says that the atmosphere of playing in Hawaii was different.

“The overall vibe of Hawaii is more relaxed,” Miron said. “It’s not that we cared less about this tournament, but we were basically on a vacation. It was a nice change going into the tournament; we didn’t have any stress for our matches.”

According to Mailloux, the focus for her team was on executing the game plan and playing aggressively.

“The theme for this semester was hard work,” Mailloux said. “(I told them) they know what to do and to execute the game plan and to be more aggressive and take risks where they wouldn’t in the past. This is a consistent team; they’re a group that needs to be pushed a little bit.”

During the fall portion of the season, the team played at a very high level. They won four of their six tournaments, but in the tournaments they lost, they still competed well. Mailloux says that their success exceeded her expectations.

“I try not to have many expectations going into the season and just go with the moment,” Mailloux said. “We have a very talented team, but they’re also a very young team. I didn’t know what to expect.”

After a short hiatus during the winter months, the team will resume play in March. Stoll says that mental preparation will be key to having success in the latter half of the season.

“The winter months will be all about mental work,” Stoll said. “I think we will be ready and we know our potential. We have very high hopes for this season and we know we can compete for the National Championship in the spring.”

The Lakers will enjoy their break coming off this high from their big win, still working hard and preparing for the spring season to start up, hoping to head into the NCAA Tournament with the same level of confidence and performance that they’ve left the fall season with.