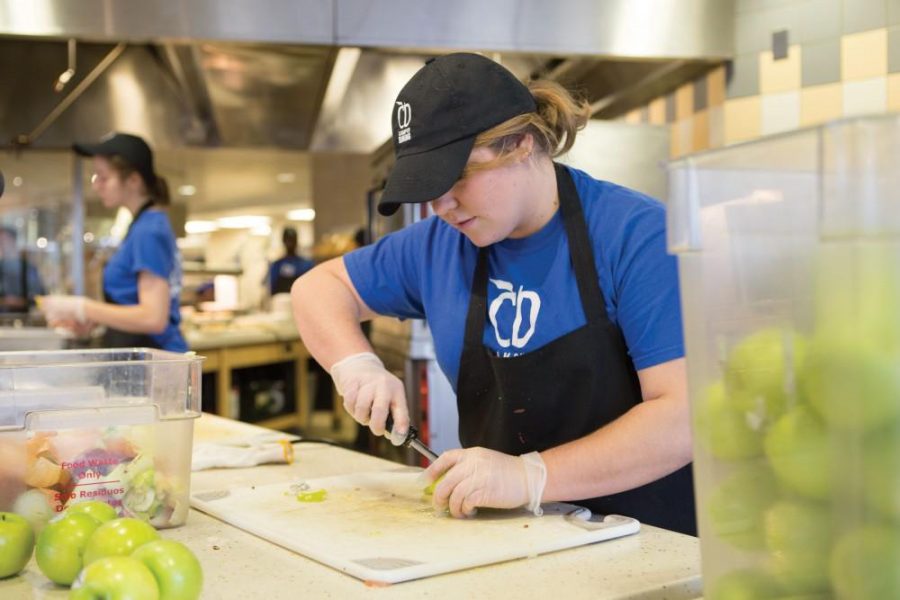 Since 2001, Grand Valley State University has contracted its campus dining service to a Philadelphia-based food service provider, the Aramark Corporation. Aramark is responsible for supplying food service labor to GVSU, and the company also determines meal choices and operational strategies for the university’s campus dining program.

According to a contract between the University and Aramark has been renewed several times, most recently in 2019. The contract, signed in February of 2019, states that the agreement shall continue through June 30, 2028, unless terminated by the university in accordance with the agreement.

In the past, Aramark has been criticized for its ties to prisons, contracts with the U.S. Immigration and Customs Enforcement (ICE), and reportedly sub-par food quality and unsanitary kitchen conditions. Some GVSU students, including student-led groups like Students for Food Sovereignty (SFS) have called for the university to end their contract with Aramark and switch to a self-operated dining service model.

“I’ve been to multiple places to look at multiple schools from other providers and self-op, and just to review the service models, the cost and food options,” Wentworth said. “We get feedback from the customers to determine the best option for our students and the GVSU community, and at the time that we reviewed those, Aramark was that choice.”

In 2013, Aramark was contracted to handle food service in Michigan prisons, but that contract was terminated in 2015, only 18 months after it began. The decision was mutual between the state and Aramark, but it came after reports of many issues including meal shortages, maggot infestations in kitchens, and disciplinary problems among Aramark employees.

Self-operated dining service is an alternative to GVSU’s current method of contracting service out to a third-party company like Aramark. If the university were to switch to a self-op model, it would shoulder all the responsibilities that Aramark currently handles, including training food service staff, sourcing ingredients for meals, and developing operating procedures for on-campus dining locations.

SFS has been the largest on-campus voice pushing for the university to move to a self-operation model. Fourth-year student and Campaign Coordinator for SFS, Alex Hicks, said breaking away from Aramark would allow students access to better food, better working conditions for campus dining employees, and more options for students with food allergies or other dietary restrictions.

“Honestly, I think Aramark aside, doing self-op is kind of the way that all universities are innovating themselves,” Hicks said. “So I think doing contracts in general, no matter who it’s through, is really outdated. And I think sometimes, for Grand Valley, it can be kind of painful for us to get out of those comfortable situations. So I think Grand Valley is just really comfortable where they see us (and) where they see themselves right now with Aramark.”

GVSU’s unlimited plan is $1,775 per semester, which is the lowest cost among these 10 public universities. Hicks and Wentworth both said that if GVSU were to switch to a self-op model, the cost of meal plans would likely see an increase for various reasons.

“A lot of the biggest concerns that students have when they talk to us is the increase in meal plan cost,” Hicks said. “Which, honestly, is probably just going to be inevitable. Because when you get higher quality things, they cost more money.”

Wentworth emphasized that contracting with Aramark provides advantages like access to existing relationships with suppliers and efficient models for serving food. Those factors both affect the current cost of a meal plan at GVSU.

“We want to involve student feedback on what things are out there and what we do and what the impact may be on the program and their thoughts on that,” Wentworth said. “But it just depends on each program. But yes, self-op is more expensive because you don’t get the efficiencies.”

Despite the potential cost increase, Hicks believes that switching to a self-operation model would be worth it for the positive impacts to all GVSU students.

“Even though not every student on Grand Valley’s campus has a meal plan, I think it would impact every single student, in some way, shape or form,” Hicks said. “And I think for Grand Valley it would increase their revenue. I think they would get more people buying meal plans.”

GVSU’s current contract with Aramark ends in 2028. More information on campus dining programs, including cost breakdowns, can be found at www.gvsu.edu/campusdine/.