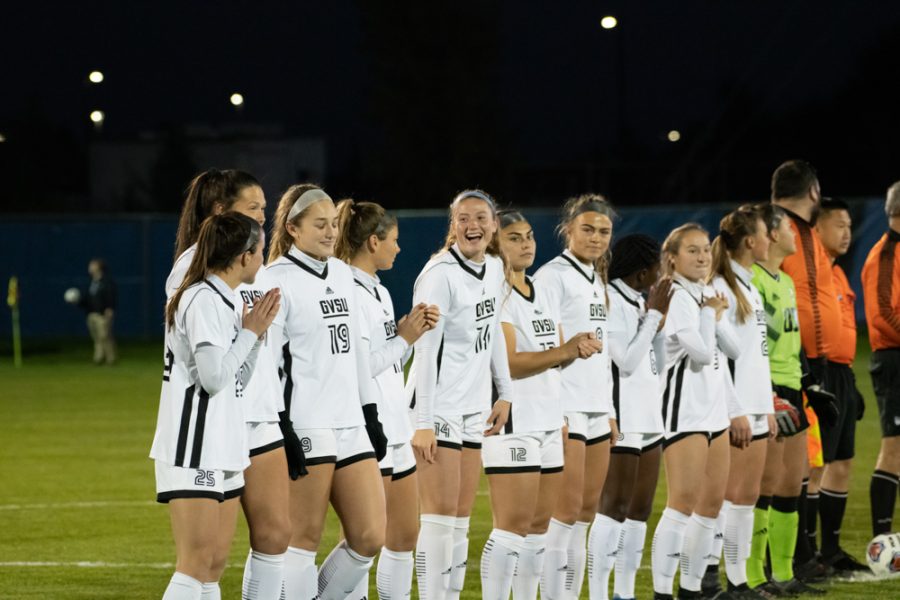 The Grand Valley State University (16-0-2) women’s soccer program clinched their 16th consecutive GLIAC regular-season championship with a win over Parkside on Oct. 29. The Lakers earned the title with two games remaining on their schedule, one against Northwood (10-9-0) on Friday, Nov. 5 that GVSU shut out 3-0, and another Sunday, Nov. 7 against Ferris State University (12-3-3) that the Lakers tied with in double overtime.

This marks GVSU’s 7th undefeated regular season in the program’s history, this time under first-year coach Jim Conlon, who has kept the momentum going on the team’s success.

Sophomore forward Kennedy Bearden was a part of the Laker program that won the 2019 Championship and has had a breakout year on offense this season with 27 overall points on the no. 2 ranked Division II offense and the no. 1 ranked overall team. Bearden was excited when they got the news of their 16th consecutive title ahead of schedule.

“I think it was great,” Bearden said. “It showed a lot about our team, and we proved ourselves to everyone and showed how good we really are. It gave us a lot of confidence as well going forward, especially with the GLIAC tournament coming up. It was really good for us but obviously, we still have games left and our work isn’t done, but I do think it was really good overall for our team.”

A mantra for the Lakers this season has been “one game at a time;” a phrase coach Jim Conlon has stuck by all season. That didn’t change for Conlon as they headed into the Parkside game knowing that there was a chance a win meant the title, who said that their only focus is going undefeated for the week, not the season.

For Conlon, this marks his first GLIAC regular-season championship as the new head coach for the Lakers. Conlon was happy that he was able to continue the success of the program that he joined this year.

“We are always looking to maximize the potential of each team,” Conlon said. “There have been great coaches before me, and there have been great student-athletes that have built this program. We were able to retain two of the great coaches on our staff, and then add Becca (Roller) and myself, and we have got some unbelievable current players. We were just looking to maintain and continue to grow on the excellence of this program and maximize the potential of this current group.”

As the regular season winds down, the Lakers now have another trophy they look to possess and have to prepare for as well in the GLIAC tournament. Bearden says the team has been locked in to make sure that they enter the post-season ready to go.

“We have actually had a lot of really valuable long film sessions lately,” Bearden said. “We sit in the film room for over an hour, and we are all talking, everyone is chipping in. Coaches are analyzing film; we are analyzing film and I think we have gotten a lot better just from the film alone. I personally feel like I have gotten better just from watching film, and I think our team is a lot more connected.”

The Lakers now will start their post-season back to square one at 0-0 and will have to fight to continue to keep their season alive with hopes to repeat the success they found in 2019 and add more championships to their already impressive 2021 campaign.