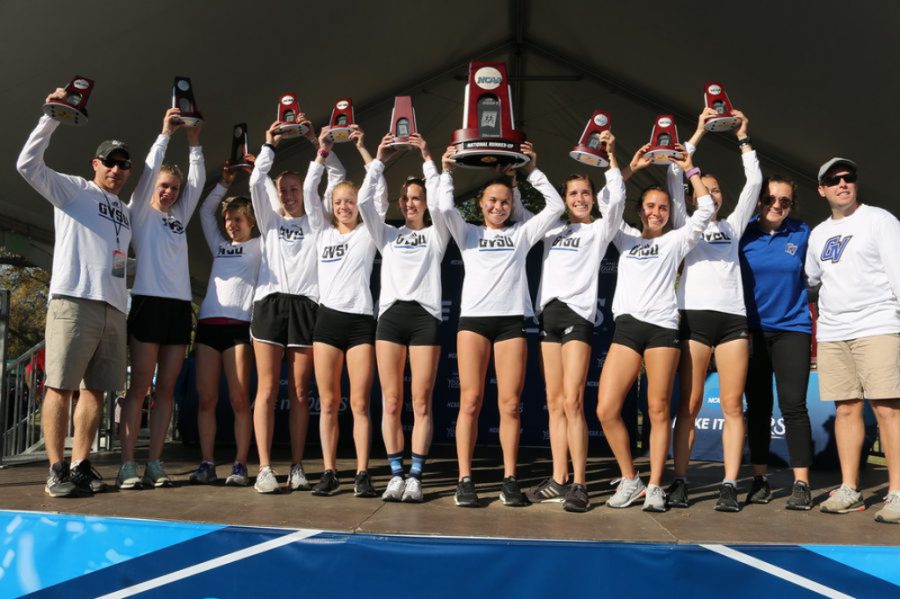 “We wanted to advance to the championship,” coach Jerry Baltes said. “We ran this meet as controlled as possible and we wanted to compete to win. We wanted to keep the streak of making Nationals going. (Now we) get back to work and prepare for Tampa.”

In the men’s race, three of the top 10 spots were occupied by GVSU runners. The group was led by junior Tanner Chada, who tied for first with a time of 30:02.6.

“Going into the meet, we were told by the coaches to conserve our energy,” Chada said. “We planned (to tie). It was exciting to be at the front of the pack; it was a strong, controlled effort through the (finish) line.”

“(This meet prepared us) really well,” Chada said. “We’re super excited for training these next couple of weeks. It was good to get the 10k under our legs again and feel what that’s like.”

In the women’s race, GVSU saw four runners crack into the top 10 on the leaderboard. The group was led by junior Hannah Becker and sophomore Klaudia O’Malley, who tied for third with a time of 20:47.6.

“Running together with Hannah was like a harder workout,” O’Malley said. “(During the race) we pushed each other and we talked often at different times during the race. Coach told us to run together because we are comparable and he didn’t want us going all out and to save ourselves for the National Championship.”

“I feel really good (about our team) after this meet,” O’Malley said. “We have great depth and our team camaraderie is really good. We’re not running for ourselves, but for the team.”

According to Baltes, this meet was only step two of a three-step process towards the National Championship, and that the team needs to prepare hard in the weeks leading up to it.

“We’ll get back to it on Tuesday with hard sessions all week,” Baltes said. “We’re in a good spot. We had three runners that didn’t race, but we had guys that stepped in, especially Sam Martens. We have some tough decisions to make, but we’ll be ready mentally.”

With the National Championship meet just two weeks away, Chada says that there are a number of emotions about it.

“There is a lot of excitement–definitely nerves,” Chada said. “We’re all really anticipated to get to Florida. We need to stay healthy and make sure we get to Florida safe.”

The team will compete next at St. Leo, Florida to battle for the National Championship trophy on Nov. 20. Baltes says there is still room for the team to improve before this.