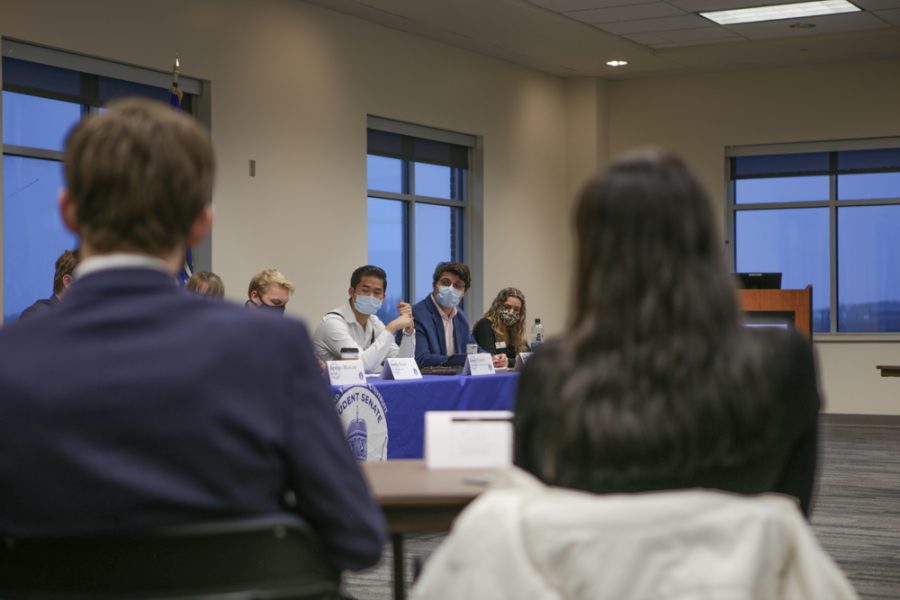 Following months of campus outcry, Grand Valley State University’s Student Senate laid out a plan of action to ramp up their response to the issue of campus dining.

The move comes after a semester-long effort by student activists to prompt officials to alter campus dining conditions and terminate the university’s ties to Aramark, the food service company that GVSU has a contract with until 2028. Mueller stated in her report that, as the University Food Committee had learned, the contract is subject to revision each year, a point that yielded questions from senators and clarification from Mueller as to the contract’s permanency.

No indication was given during the meeting, however, to suggest that the university is considering termination.

Given this kind of information surrounding contractual and campus dining intricacies, Student Senate entered a debate on whether its statement and memorandum on the issue should be crafted prior to the coming winter break or if Student Senate should be allowed more time to gather facts before releasing it.

Senator Nancy Hoogwerf said she believed that taking more time to gather as much information surrounding the issue as possible would lead to a more accurate and effective message.

“I feel more information and research that we are able to get done before coming to a conclusion would be beneficial for all,” Hoogwerf said.

Other supporters of a prolonged timeline, like Vice President of Educational Affairs Faith Kidd, sought to dispel what they saw as misconceptions around what such a plan could mean.

On the other side of the discussion, Senator Zachary Schmidt said he felt that the additional time was unnecessary.

“I think that we were in a position to continue to put pressure on the university to move forward with some type of action plan and change the situation that’s going on,” Schmidt said.

Echoing that sentiment, Vice President for Campus Affairs Aaron Rusch said he is a strong supporter of urgency and swiftness in getting the Student Senate’s message out.

“Personally, if we have a kind of plan of action, I don’t see, necessarily, a point in waiting,” Rusch said. “So, I’m totally a fan of getting on top of it and getting the ball rolling.”

Ultimately, however, a resounding majority of senators at the meeting agreed to allow more time to gather information before crafting the communique. While a few senators voted to strike down the measures, citing concerns over their efficacy and timeline, some of those opposed to the course of action still espoused optimism regarding the night’s debate.

The statement from the full Student Senate is expected to be drawn up after students’ return from winter break in 2022. The memorandum from President Mueller will follow. While the specifics of the documents’ language remain undecided, the move may grant ultimate clarity as to Student Senate’s goals in resolving what has been a visible semester-long challenge.