The Diatribe, GRPM hold panel to discuss “The Why” 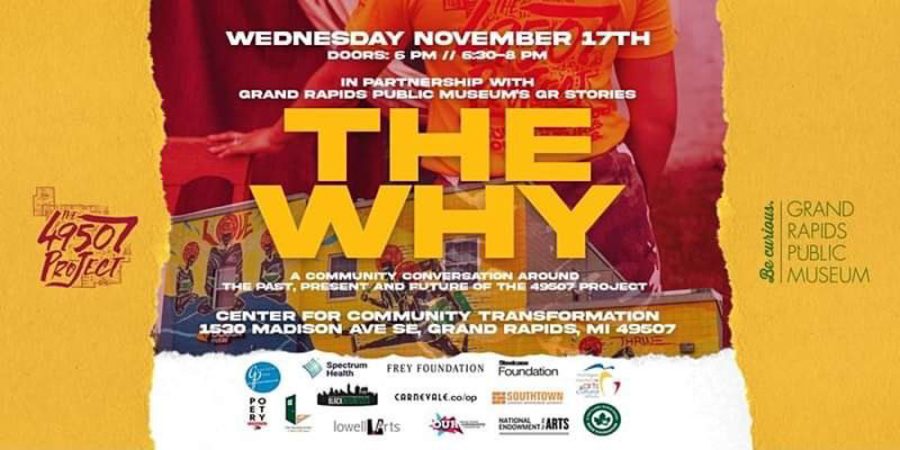 The Diatribe, a Grand Rapids group that uses the performing arts to encourage younger generations to inspire change in their communities, recently partnered with the Grand Rapids Public Museum (GRPM) to host a panel discussing The 49507 Project.

The panel was called, “The Why” and was held on Nov. 17 at the Center for Community Transformation in Grand Rapids.

G Foster is a co-founder, teaching artist, and donor experience manager at The Diatribe, and said The 49507 Project was born in response to the deaths of Breonna Taylor and George Floyd.

When artists in the Grand Rapids community were invited to paint boarded-up windows of businesses during the Black Lives Matter protests, Foster said there were restrictions on what could, and could not, be painted.

The goal of The 49507 Project, he said, was to open the door to creating artwork without specific guidelines.

“We’re tired of being policed,” Foster said. “We just wanted to do an unapologetic art project.”

He said during the thick of COVID-19, in partnership with the Garfield Park Neighborhoods Association, The Diatribe found that many people in the 49507 zip code were missing out on necessities.

Whether a person needed someone to go to the grocery store for them, or help to pay their bills because they were laid off from work, The Diatribe gathered emails and phone numbers and was able to come up with nearly $30,000 to help the members of the community.

Through this, the idea for beautifying and celebrating the community with artwork was born.

“We wanted to turn the 49507 into a multicultural art district,” Foster said. “We want people to be proud of where they’re at and where they’re from and this is just one of the steps.”

To create murals that were the best reflection of the community they would reside in, The Diatribe held community listening sessions in these neighborhoods and took feedback on and about the artwork from those living there.

The Diatribe initially only planned to do one mural but received enough funding for seven due to the support of individual and local donors.

The large-scale murals are now complete and were created by local people of color on prominent buildings.

“It’s just so crazy how it all happened,” Foster said. “It was born out of the desire to elevate the voices of Brown and Black residents and inspire them to claim space.”

“The Why” panel was held to further discuss the impact these murals have on the community, and how they encourage the residents.

“(The panel) was the community as well as the artists being able to talk about the impact of this beautiful opportunity,” Foster said. “I feel like in listening to your community you get to put things in action and that’s what we are hoping this panel was able to do, is to be the beginning efforts of action. To be the change we want to see in the community.”

Christie Bender, the Director of Marketing and Customer Service at GRPM, said the museum  partnered with The Diatribe to hold the panel to help expand on their current series, “GR Stories.”

“‘GR Stories’ is a relatively new series the museum is hosting with community partners to share a deeper understanding into various cultures and backgrounds, celebrating the diversity and richness of Grand Rapids history and culture,” Bender said.

Bender said the museum’s goal with the project is to gather, and immortalize, the voices of the community in the museum’s collection.

“Through GR Stories programming, the Museum in partnership with community groups, is creating a way to showcase authentic stories and local voices,” Bender said. “We hoped to see community members participating in person or online to learn and better understand each other. By collecting these stores and artifacts from the community and adding them into the permanent collection of the GRPM, the authentic history of our community will be preserved and shared with future generations.”

Foster said in hearing and preserving these voices, he hopes everyone in the community will take a moment to listen, and create change.

The Diatribe has funding for, and is planning to, create a new mural next year to continue The 49507 Project.