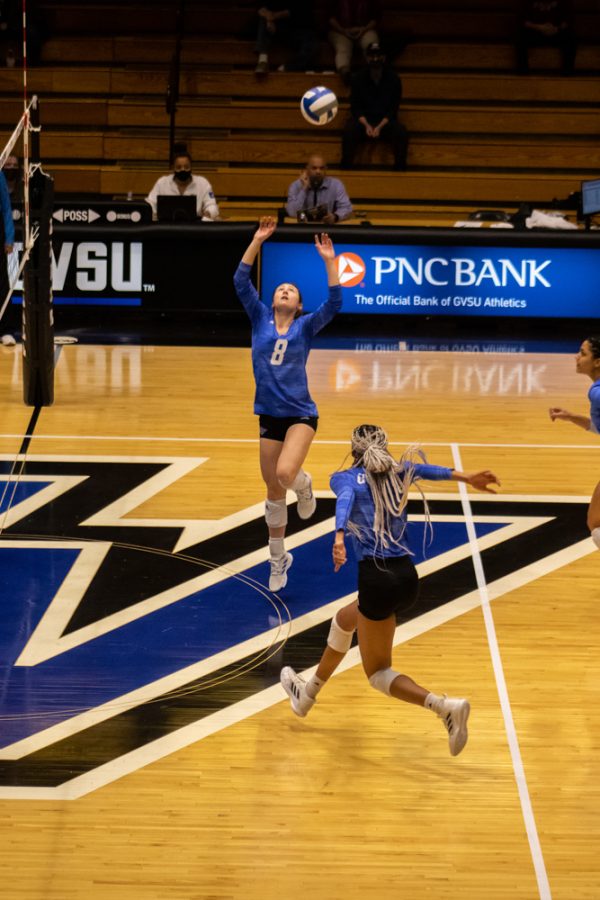 The no. 4 seed Grand Valley State University (17-9) volleyball team hosted its first-round matchup in the GLIAC Tournament on Wednesday, Nov. 17, against the no. 5 seed Davenport University (16-11). The Lakers lost to the Panthers as they dropped three consecutive sets by just two points.

Heading into the match, the Lakers felt good about their chances of winning, as they had already beaten the division rival in both of their matches earlier this season.

“I think they showed up with a different mentality and different intensity than they did in the first two matches; I definitely give them that,” said junior outside hitter Ali Thompson. “But it’s definitely disappointing you lose to a team you know you are capable of beating, especially at the most crucial time.”

Beginning the match strong, the Lakers looked as if they were going to continue their dominance over the Panthers from the regular season, winning the first set 25-17. However, in the ensuing sets, the Panthers found ways to barely edge out the Lakers.

Beginning in the second set, the Panthers were able to pull out a slim 27-25 victory, holding off an impressive performance by Thompson who was having a career match and scored the last five points of the second set for the Lakers.

“She (Thompson) had a stellar match,” said coach Jason Johnson. “Her ability to compete, her ability to terminate and put points on the board for us, her desire to be that leader on the floor for us last night, that is exactly what you are hoping for.”

Set three once again ended in a nail-biting fashion as the Lakers held a 23-22 lead, but the Panthers would go on a 3-0 run to close out the set and give themselves a 2-1 advantage in the match.

On the verge of being defeated, the Lakers showed a lot of grit to not give up and took a lead late in the fourth set to give themselves a 29-28 lead and potentially forcing a fifth set. However, the Panthers once again went on a 3-0 run, defeating the Lakers in the final set 31-29 and winning the match 3-1.

“I was proud of us in the fourth set,” Thompson said. “ We were battling back, taking aggressive swings and just competing with them when we were down like five different game points. But we need to be able to string more than one point in a row together to be able to close out those sets.”

Although the Panthers won the match in four sets, the Lakers actually outscored them in total points 102-100.

For some on the Lakers’ volleyball team, including Thompson, it was the last home match of their volleyball career at GVSU.

“I was super excited all day honestly, it was a little bittersweet, but I was more so super excited to play on our home court one more time and start our postseason journey,” Thompson said.

Moving forward, the Laker’s postseason hopes are still alive, although the loss takes away the certainty of an NCAA tournament birth. Heading into the match, the Lakers were ranked no. 6 in the Midwest region, needing to remain in the top 10 for a chance to compete in the NCAA tournament.

“I feel like if we had won this match against Davenport, with our body of work, that we were solidly in the (NCAA) tournament,” Johnson said. “But I think that loss puts one more question mark on our resume that hopefully, we overcome.”

Monday, Nov. 22, the NCAA will host its selection show where the Lakers will tune in to see if they made the tournament and potentially who they will match up against.