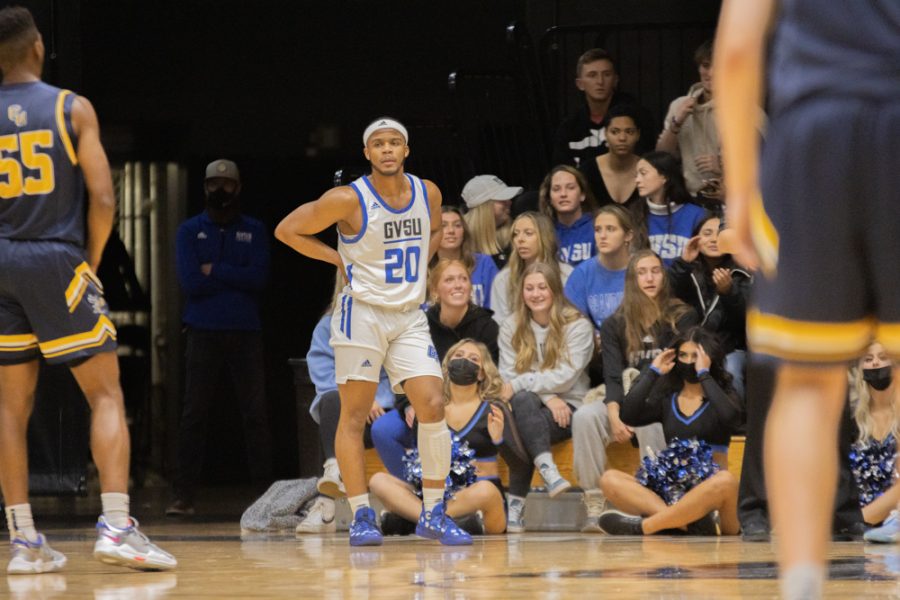 The no. 4 ranked Grand Valley State University (2-0) men’s basketball team’s first home game of the regular season tipped off in the GVSU Fieldhouse Arena on Saturday, Nov. 20. With fans in the stands to pump up the players and nostalgic game-day energy in the arena, the Lakers were able to defeat the Cedarville Yellow Jackets (1-3) after a close game in the end of the second period.

After last week’s victory at University of Indianapolis, the Yellow Jackets also won their matchup against UIndy, creating an even more competitive atmosphere for the two teams.

“I thought they’ve got a really solid team,” said coach Ric Wesley. “They’re a little bit like us; they’re a veteran team, they changed defense, they were difficult to play against. We thought we had a good win at UIndy last weekend, and then these guys turned around and did the same thing on Thursday (Nov. 18) which really caught our attention.”

The start of the first period was Cedarville’s, with a few turnovers and some good shots, the Yellow Jackets held on to their lead for the first six minutes of the game. The Lakers were quick to their rebuttal when senior guard Jordan Harris grabbed a defensive rebound for senior forward Christian Negron to take all the way down the court for his first dunk of the game.

As the crowd was set ablaze with energy, junior guard Ja’Kavien Lewis contributed another quick steal and passed it to freshman guard Trevor Gunter who came off the bench and stole the lead for the Lakers with a layup, making the score 12-15. Once the Lakers found their game against Cedarville, they never let go of the lead.

“Our defensive intensity really improved,” Wesley said. “All of a sudden we had a couple steals, loose balls, Christian got a run out dunk, Trevor was in there somewhere with his and-one layup, we had two or three breakout opportunities, and when you’re playing a good defensive team, man, those are good. We want our defensive to be better than their defense, and certainly, for that stretch, I thought it was.”

The first half of the game started off slow for the Lakers as they trailed with a five point deficit, but that was eliminated early enough to get all the way up to a 42-30 lead by halftime.

The second half started and the Lakers kept that momentum going for the better part of the half, starting with a six point run. Negron found his second dunk of the night when senior guard Issac Gassman passed him the ball after a defensive rebound for Negron to start a fast break in the paint to advance their lead 62-44.

The Yellow Jackets started to feel the pressure from the Lakers and began to play a tougher defensive game, dwindling the Lakers’ lead to a nerve-wracking 5 points by the time the 1:30 mark hit the scoreboards.

“When one team gets the lead as the game gets going on, it’s always a challenge to maintain your aggressiveness without being reckless,” Wesley said. “And then the team that gets behind starts throwing caution to the wind, so they get more aggressive, and that’s why you see these big runs in the game. Against theses good teams you have to play 40 minutes. They don’t go away after 20, 35, 38 minutes; you have to go right into the last minute.”

As the Yellow Jackets handed over three free throw opportunities to the Lakers in the last few moments of the game, Cedarville was unable to regain their momentum and the Lakers came away with a home-opener win 80-71.

“I was just trying to pick my spots, get to the foul line, and get some easy passes,” said senior forward Jake Van Tubbergen. “You’ve got to give a little bit of credit to them; they kind of force you to play a little different style than what you’re used to.”

Van Tubbergen walked away with an expectational 17 points scored and 11 rebounds, followed by Negron who had 12 points. The team also saw 30 points from the bench, which was made possible by sophomore forward Marius Grazulis and Gunter who had some great shots.

“Christian got foul trouble in the first half, and we brought Marius in and he did a good job, and then he actually got tired,” Wesley said. “And then Tre Gunter came in with some really big shots and had a really big pull up there in the second half that I thought really kind of rolled their momentum.”

In preparation for the week ahead, the team will look forward to playing the Grace Christian Tigers on Tuesday, Nov. 23 and then traveling to Florida to play Florida Southern College and St. Leo University on Friday and Saturday, Nov 26-27.