Moving On Up? GV Athletics disputes football recruits’ claims of a move to DI 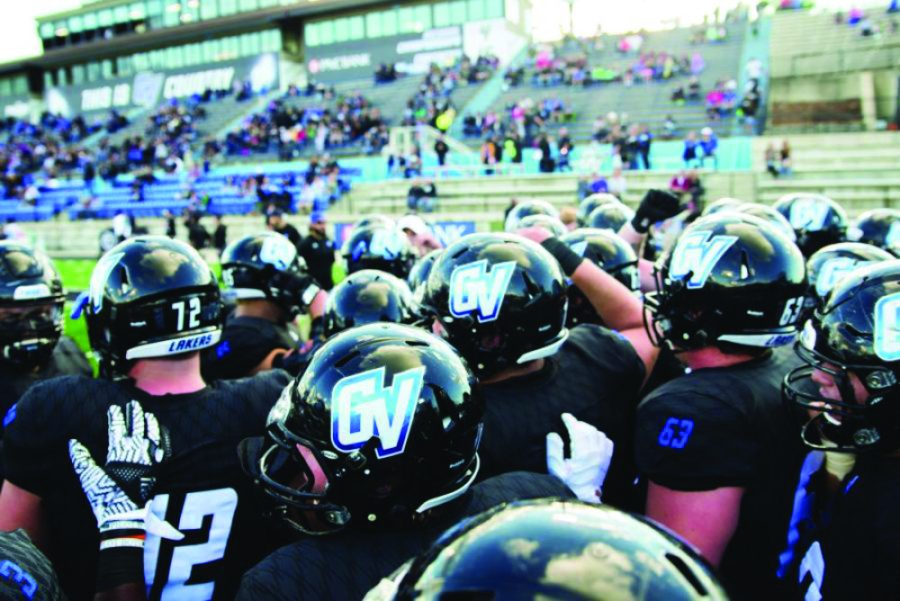 As one of the most successful schools in Division II football, Grand Valley State University has been dogged for years by speculation that the school is looking to move up to Division I. Recently, these rumors have gained momentum.

As the verbal commitments for GVSU’s 2022 recruiting class started coming in, quarterback recruit Aidan Lucero gave an interview to Tim O’Halloran of Rivals.com that seemed to confirm the rumors of a 2023 move to the Football Championship Subdivision (FCS) in 2023.

“GVSU is also leaving D2 and will be playing at the FCS level in the Ohio Valley conference in 2023 so it’s really exciting times for the school and the football program,” Lucero told O’Halloran.

In a separate interview with the Lanthorn, Lucero elaborated.

“I know that they’re (GVSU) a really good program, and this was before I knew they were going to make the transition to the FCS,” Lucero said. “And obviously that kind of played a big role in my commitment. It was actually Coach Mitch (that told us) when I went there for my visit; all the recruits were sitting in the room. Most of the kids that are in my commitment class, I believe, pretty much all had DI offers, so Coach Mitch was kind of the one that broke the news, and that was in-person while we were there.”

While not every verbally committed recruit took the same tour of the GVSU football facilities and visited with the team, several others have made similar claims in separate interviews with the Lanthorn.

Offensive lineman Mathew Haan, a current high school senior, claims Mitchell told his parents about the possible move to the FCS during his photoshoot.

“Coach Mitchell sat down with all the parents while we were doing our photoshoot in our uniform, and he told them that all signs point towards FCS,” Haan said. “It’s not for sure, but they’re treating this recruiting class like Division I so that they’re going to be prepared when they take the jump, and they are expecting to.”

The prospect of being part of GVSU’s first DI roster is exciting news for new recruits, and could influence their decision to commit to GVSU with offers from other Division I programs.

“We didn’t make much of it because, yeah they (the media) probably say that for every successful DII,” Haan said. “But when we got (the news about the FCS) from the coaches we were like, ‘whoa, this is serious. Holy crap, this might be a FCS school,’ and that’s so awesome.”

In several more interviews with committed recruits, it is apparent that other GVSU coaches were relaying the same information during these visits. Safety-linebacker Kyle Johnson heard the news from Associate Head Coach and Secondary Recruiting Coordinator Nick Postma.

“He said that we’ll be joining the Ohio Valley Conference pretty soon,” Johnson said. “I think he said class of ‘23 will, so probably after this following year. I always knew Grand Valley was, like, top tier among the DII schools; they have everything they need to take that big step, so I kind of saw it coming but I just didn’t know when until Coach Postma said it.”

Athletic Director Keri Becker is used to these questions. In 2018, she was interviewed by the Duluth News Tribune about why Division II schools in the NCAA are having trouble moving up to Division I.

When asked by reporter Mike McFeely if GVSU was considering moving up, Becker’s response was to the point: “The short answer, to make this simple, is no,” Becker said.

Yet the Great Lakes Intercollegiate Athletic Conference’s (GLIAC) ongoing membership issues might make a decision come sooner than later. With multiple teams leaving the conference in the past seven years, members of the GLIAC, including GVSU, are often forced to scramble to find teams to fill out a full regular-season football schedule.

The GLIAC has been in turmoil for the past several years, with multiple teams leaving the conference:

Northwood University will also be leaving the GLIAC in 2022, resulting in 10 university members, only six of which have football programs. This leaves GVSU needing to find five non-conference opponents to complete their schedule from Divisions I, II, or III–each of which has its own obstacles.

“It makes zero sense for a FCS school to play a Division II school; it makes zero sense for that to happen,” Mitchell said. “You don’t see that in the landscape of college football. It makes no sense for us to play any Division III opponent we played this year. We played Wisconsin-Lacrosse and that did nothing for us. When I’m on the Division II national football committee, one of eight members that selects the postseason field, that game was not even counted. In regards to our record, it’s like it didn’t even occur. So for us to play one of those contests, it gives us nothing to bolster our resume for postseason play, and you run the risk of injury.”

With recruits seemingly assured of a move during their visits, the Lanthorn asked Becker, Coach Mitchell, and Associate Director of Athletics Tim Nott for clarification.

“I think everybody’s evaluating their athletic department where it sits with what’s going on in the GLIAC,” Becker said. “We’re doing the same exact thing. We’re evaluating our status within the GLIAC, looking for all of the opportunities that exist because our league continues to lose members. That’s a real concern. The question is not, are we looking to move? The question is, we are keeping our eye on what opportunities exist for Grand Valley.”

Yet the question remains: are coaches promising a move that has not been officially made?

“They’re talking about the potential move because I addressed it,” Mitchell said. “I addressed it in the room; I’m not going to shy away from the fact that I addressed it. I addressed it with all of our recruits. When they came on a visit, I told them all, like, listen, if you had to ask me as a football coach, there’s a high probability this thing’s (GLIAC) not sustainable. Again, what type of picture am I going to paint: a dying fruit on a tree that’s called Division II football, GLIAC football, an attempt to try to entice people to come to this university to play football? Or not trying to be optimistic and try to provide a picture of like, listen, we’re really good at Division II, but we’re also entertaining looking at some possibilities.”

If GVSU were to jump to the FCS, it would not be a simple move. Every other GVSU sport–basketball, soccer, tennis, swim and dive, cross country, track and field, baseball, softball, lacrosse and golf–would have to do the same.

Furthermore, any DII school looking to make a move into the FCS also needs an invitation from the NCAA to join the conference. GVSU hasn’t received one.

“GVSU’s name has become part of this conversation in the media, yet we have not been invited to any of these conferences,” Becker explained in an email.

The fact that GVSU has not yet been invited to make the jump to DI leaves the recruits’ recollections as an open question. The three recruits the Lanthorn spoke to confirmed that they were told GVSU was moving to the FCS by Mitchell or members of his staff, which Mitchell feels is a matter of the recruits hearing what they want to hear, or attempting to justify their commitment to GVSU over DI offers.

“When (recruits) start getting interviewed by people and things start to happen, you’ve got to provide some type of justification for why you’re going to sign with the Division II school and turn down FCS offers like Northern Iowa,” Mitchell said. “(Lucero) has a Northern Iowa offer and they’re in the FCS playoffs. You’re going to attempt to take the information that’s provided by the head football coach (himself) and a recruiting visit. And you’re going to work that in a way that would make sense to people. Like, why the hell would you turn down an FCS offer to sign with the Division II school?”

Despite what recruits have said, Becker affirms that GVSU Athletics is currently determined to stay in the GLIAC, but that a move up is always possible.

“We’re trying to make sure that we’re in the best position possible to continue our success wherever it’s at,” Becker said. “We’re working very diligently with our brothers and sisters to try and make sure our league is getting some new members. But we also have to take care of what’s best for Grand Valley.

And that’s my job as the athletic director, to make sure this university is positioned to take advantage of whatever opportunities may present themselves. And that opportunity may be Division II; continuing Division II. That’s what we’re committed to right now. We’re a Division II institution.”