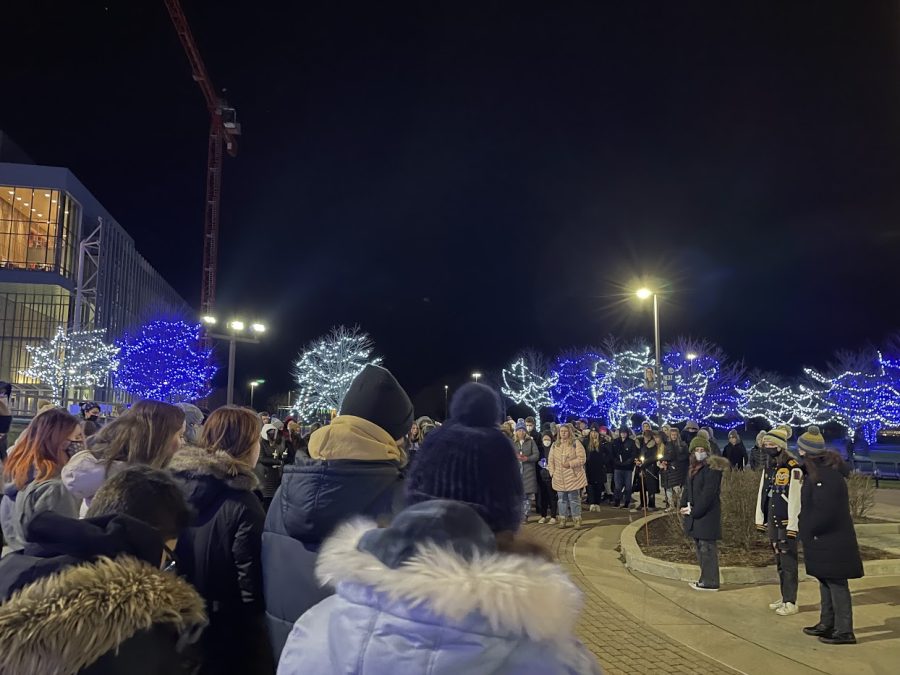 Aedena said that following the tragedy in Oxford, she was looking forward to coming together with the GVSU community for support. After a week had passed and no vigil had been announced, Aedena decided to organize one with the help of her friends.

During the vigil, Alshabi and Scovic spoke, and Aedena read the poem “How Do We Go On” by John Mark Green. GVSU’s University Singers performed the poem by composer Paul Hindemith that is inscribed on the Cook Carillon Tower–“People who make music together cannot be enemies, at least not while the music lasts.” The group gathered for the vigil also held four minutes of silence- one minute for each of the victims.

Scovic said that in addition to seeing Oxford alumni at the vigil, it was powerful to see other members of the GVSU community in attendance.

“I think the cool part too, is not only seeing the familiar faces, but seeing some of the unfamiliar ones,” Scovic said. “Just to know how much of the community is willing to step up and support our small little hometown in a time like this really meant a lot.”0

Along with candles, Scovic, Aedena and Alshabi provided flyers with information about counseling services at GVSU and how to support the Oxford community.

Owen Delie, an Oxford alumni who attended the vigil, said that former Oxford students at GVSU coming together during a difficult time was emblematic of their hometown.

“That’s also kind of how Oxford is, though,” Delie said. “We’re so small like on any anything, and even when something that isn’t huge happens, there’s always a big response to it.”

GVSU currently holds 82 graduates from Oxford High School, as well as many other Lakers with connections to the Oxford community, according to an email sent to the GVSU community by President Mantella on Dec. 1 in response to the shooting.

The shooting, which took place on Tuesday, Nov. 30, left four students dead and eight others injured, including one teacher.

The 15-year-old suspect, Ethan Crumbley, is being charged as an adult with one count of terrorism causing death, four counts of first-degree murder, seven counts of assault with intent to murder, and 12 counts of possession of a firearm in the commission of a felony, according to the Detroit Free Press. Crumbley’s parents are also facing charges or involuntary manslaughter, following a manhunt.

Mantella said that the impacts of the tragedy in Oxford extend to the GVSU community and beyond. Mantella said the university reached out to those with connections to the Oxford community following the events on Dec. 1 with resources to support them during this time.

Mantella called on the GVSU community to embody the school’s values by supporting one another and their larger communities.

“Lakers live in a robust culture of care, compassion and devotion to the well-being of one another, here and in our larger communities,” Mantella said. “In the face of an event so devastating to our state and those around us, let’s live into those values and extend our support to those impacted.”