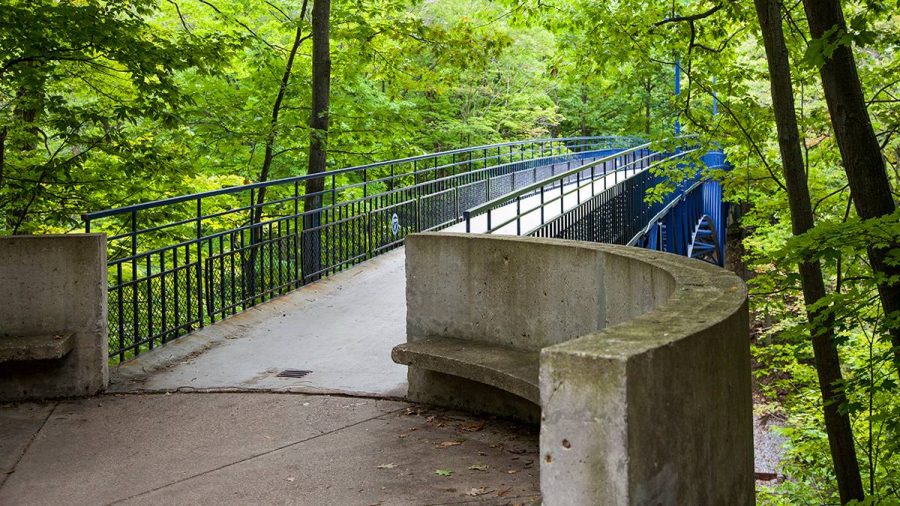 Following the death of Grand Valley State University student Quentin “Quinn” Campbell, who died by suicide on Dec. 9, many GVSU students have come together to support one another through this challenging time.

Students organized a memorial on the Little Mackinac Bridge, shared information about mental health resources, as well as created a gofundme for funeral expenses which has raised over $37,000.

In addition to all of this, GVSU seniors Logan Congdon and Reagan McLaughlin were moved to take action on campus.

Since its inception, the petition was shared on various social media platforms and has gained almost 28,000 signatures.

McLaughlin said once she and Congdon realized Campbell’s death by suicide was not the first at GVSU to have taken place at the Little Mackinac Bridge, they felt more action needed to be taken to help make GVSU a safer place.

In doing more of his own research about netting acting as a suicide deterrent on bridges, Congdon said he found that it was not uncommon, and this could help keep the GVSU community safe.

“I remembered reading an article a long time ago about netting being installed around the Golden Gate Bridge, and I thought ‘If they can make that bridge safer, why not ours?’” Congdon said. “I later learned about netting installed at Cornell and other campuses, which makes me feel encouraged about our petition’s prospects.”

McLaughlin said she was overwhelmed with the volume of signatures the petition gained and the GVSU community’s response of such a willingness to help make change on campus.

“I just felt very proud of our campus community…it surpassed all of my expectations and I was just thrilled that people were wanting to make this change and wanting to be supportive and come together as a community to make a change,” McLaughlin said.

Several GVSU students voiced their concerns for the safety of students on the petition. In addition to the GVSU community comments in this section, Campbell’s mother, Tami, has also responded to the petition, where she said the bridge needs to be fixed.

“My 17-year-old daughter wants to come to GVSU for a day or weekend, be with his friends, see what his life was like,” Campbell said. “And I want her to. But I am terrified because of that bridge. You asked me when you called me if there is anything you can do for us. Yes. Fix the damn bridge.”

She said since her response to President Mantella’s post on Facebook went viral around the GVSU community, she has received many texts and emails from students who have struggled with having suicidal thoughts while on the Little Mac Bridge.

Congdon said that people close to him, as well as himself have struggled with these thoughts while crossing the bridge, and that he wants to help “ensure that no more Laker families have to endure the gut-wrenching heartbreak that the Campbell family has.”

President Mantella has also responded to the petition, where she left a statement expressing her concern for GVSU students, and her openness to their suggestions.

“The GVSU community is deeply saddened by Quinn’s death, Mantella said in her post. “I am thankful for your concern for your fellow students. To all who are signing or commenting on this petition, I welcome your input and am committed to reviewing all suggestions. Please reach out to those around you who may need care or support. Help is available.”

McLaughlin said she was “impressed” by how open President Mantella was to the petition, and Congdon said he understands it can be difficult as a leader to make statements about sensitive topics.

However, Congdon said he does hope that President Mantella’s involvement doesn’t end with her statement.

“It also can’t be easy to be a leader during times like this,” Congdon said. “However, it feels like her condolences are not enough at a time when we as a community need action. Without action, there will only be more condolences.”

McLaughlin said she hopes that more action will be taken at the start of next semester when everyone returns from the break.

“I feel like a net would be a very physical, visible reminder that people don’t want you to do this, people do support you, you can go get help,” McLaughlin said.

As the petition awaits action, GVSU encourages community members struggling with mental health or a crisis to visit the University Counseling Center in person, as well as use online resources for dealing with trauma and self-care. In addition to this, GVSU students, faculty and staff can submit a CARE referral for themselves or others who may be experiencing a crisis or in need of additional support.