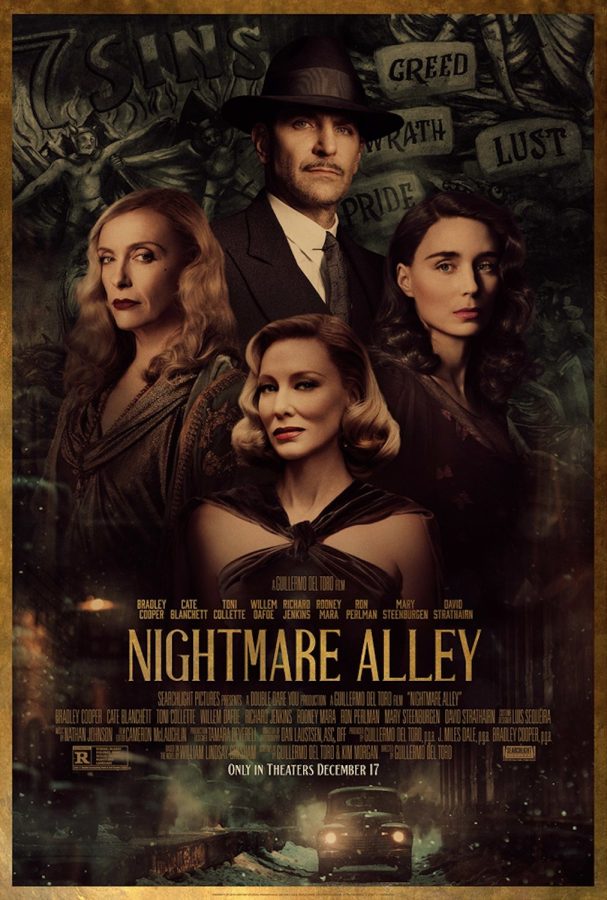 In the latter half of 2021, blockbuster movies have been dominated by several franchises and remakes like “Spider-Man: No Way Home,” “The Matrix Resurrection” and “Dune.” In an effort to watch and review a movie that has the slightest bit of originality, I decided to check out “Nightmare Alley.”

“Nightmare Alley” is a remake, however. This is a Guillermo Del Toro adaptation of the 1946 novel and 1947 film of the same name. While the 2021 film brings new editing, set pieces, CGI that the mid-twentieth century movie lacked, Del Toro’s version is first and foremost still a remake.

The idea of “Nightmare Alley” isn’t original. For Del Toro however, this film is a departure from his typical monster and action movies. Instead of using grotesque creatures – which is one of the biggest things Del Toro is known for – the director instead uses humans and their aspirations and lust for power as the driving point for the story.

“Is he man, or beast?” This was the question consistently asked throughout the film. Del Toro withdraws perfectly from his regular humanoid monsters to articulate meaning and discussion through the purely flawed nature of man.

Del Toro sets this idea and atmosphere perfectly in the opening 20 minutes of the film. The neo-noir atmosphere is splendid and evokes thrills, sinister motives and creepiness. This is the driving point of the film as the music and setting immediately draws the viewer in. However, this original ambiance and world-building runs entirely too long.

The first and second act of the film spend the majority of their time still building the framework and environment of the film, without much action and plot points. Act one begins with Stanton Carlisle (Bradley Cooper) as he joins a travel circus. Stanton eventually becomes ambitious as a con man and a “medium” as he is eager to learn more about several circus acts, seduces a younger woman to join his new act and kills an experienced “medium” to take his notebook and learn the secrets of the trade.

The second act begins with Stanton and his new wife, Mary Elizabeth Cahill (Rooney Mara), as they leave the circus and perform shows for high-class audiences. Carlisle soon meets psychiatrist Lilith Ritter (Cate Blanchett) as she attends one of his shows and tries to debunk his persona as a true “medium.” Stanton and Lilith then work together to perform his biggest con yet, pretending that Stanton can communicate with Ezra Grindle’s (Richard Jenkin) former lover who died after Ezra forced her to have an abortion.

The third act of the film is fantastic as Stanton’s con ultimately fails and he’s betrayed by Lilith. The construction of this final act is completely necessary in the first two acts. However, those acts ran entirely too long and the excellent plot points in the ending would’ve been achieved if the first two acts were 25 minutes shorter. At points the film became a drag despite its ultimately satisfying payoff.

While some parts of the first two acts of the film were tedious and lifeless, these moments were carried by the film’s sensational acting. Cooper and Blanchett were particularly captivating. Their chemistry was excellent, and they perfectly portrayed their characters’ devious motivations. Jenkins, Willem Dafoe, Ron Pearlman and Toni Collette also have standout performances as supporting characters. During the long and dull moments of the film, the acting carries these scenes and makes them somewhat tolerable.

Cooper is the star of the show. Not only is his character calculating and deceitful, but he is also charming and seductive in certain moments. Without Cooper as Stanton, this film would be completely different. The final scene in particular – a final monolog by Cooper and an emotional close-up of his face after he’s truly faced the consequences of his action – is the pinnacle of his acting career.

“Nightmare Alley” is undoubtedly an entertaining and well-acted film that left me wanting more. Some parts of the film were a drag and I just wanted to get to the ending where I knew something big was going to happen. The exposition went on for too long as the tone of the film was perfectly encapsulated at the beginning of the movie. Some of the plot and symbolism was extremely obvious too, particularly the geek’s involvement in the film.

Del Toro’s film visualizes the cautionary tale of being too ambitious in one’s personal life and career and to be careful of what one wishes for. This is seen with Stanton, as his actions eventually catch up to him. However, as a reviewer and fan of films, I wish Del Toro was more ambitious in this film and had been more creative. “Nightmare Alley” is just another remake in an industry littered with franchises, replications of older films and straight up cash-grabs. “Nightmare Alley” is a good film, but it left me wanting more not only from the individual movie, but from new films as a whole.