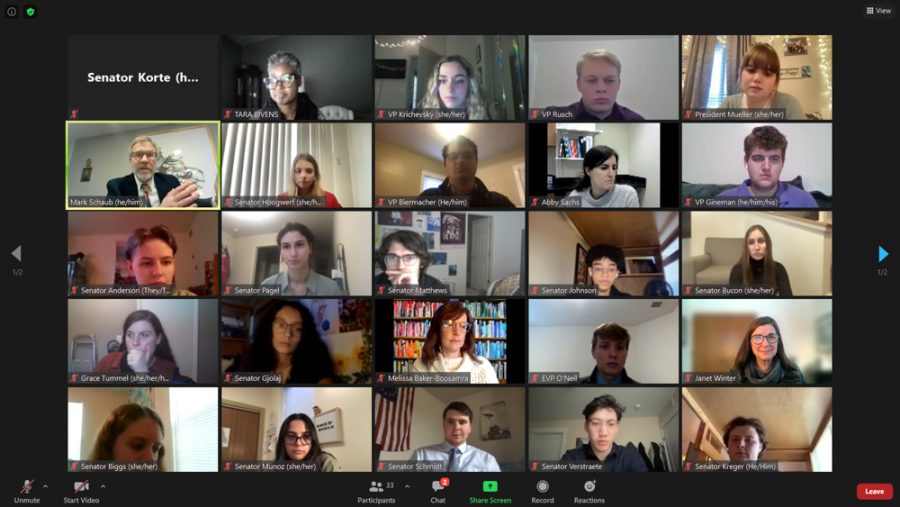 Appearing before the university’s Student Senate on Jan. 13, representatives from the Reach Higher 2025 Steering Committee presented their newest draft of the plan in hopes of both informing and securing the Senate’s endorsement.

Co-Lead of the Reach Higher Steering Committee, Mark Schaub, said the draft embodies the university and what it hopes to stand for.

“This is a document for all of us and a public statement for the world,” Schaub said. “This is what GVSU is and what we value.”

Last September the senate endorsed the initial draft of Reach Higher 2025. However, the proposed plan came under scrutiny when presented to university faculty.

GVSU associate professor, Len O’Kelly, said faculty felt that the original draft of the plan seemed to be reaching a bit too high.

“The faculty felt excluded,” O’Kelly said. “The feeling that many people had was that the original Reach Higher document was making promises we couldn’t possibly deliver.”

While not a sitting member of the UAS, O’Kelly’s position as chair of the College of Liberal Arts and Sciences Faculty Council put him in conversation with multiple faculty senators who opposed the endorsement.

“The original document talked about individualizing study plans and making your dreams come true and all this stuff,” O’Kelly said. “And we all kind of looked at each other like, ‘We are not going to have 25,000 different majors at this university. That’s not sustainable.’”

On Oct. 1 the University Academic Senate (UAS) voted by a one-vote margin against endorsing the new plan, sending the Reach Higher team back to revise its work.

The UAS’s decision to oppose the plan came as a surprise to the Steering Committee members who had held confidence in the success of the initial draft.

“We thought we had a good product in the fall and, yes, we were very disappointed when we were told ‘go back to the drawing board,’” Schaub said.

While discouraged by the original setback, Schaub’s recent presentation to the Student Senate highlighted the benefits that came with having more time to improve their draft.

“I thought what we had was good,” Schaub said. “This is better.”

After taking into account around 30 pages of input from the UAS, Schaub and his colleagues outlined the major changes made in the revised plan for the senate.

Some of the edits made to the draft consisted of additional bullet points and descriptions to clarify contested sections, as well as the omission of second-person language. There was also more inclusion of faculty both within the plan’s language and in the process of crafting it.

O’Kelly said he thinks this is a step in the right direction.

“The newer version that’s out talks about empowering students and the language is a lot more in line with what the faculty were thinking,” O’Kelly said.

O’Kelly said he still recognizes, however, potential challenges the revised plan could face in its road to becoming fully endorsed.

“I think there’s still some concern about what’s there,” O’Kelly said. “I mean, it mentions faculty at least now in the document where it didn’t really expressly do that before. But now, I think it’s a little closer to something faculty might be able to get behind.”

Schaub said while it’s impossible to satisfy everyone, he hopes that they come close.

“We’re a Steering Committee that represents a large, diverse institution, so we don’t have 100% agreement even on the Steering Committee,” Schaub said. “What we have here, to the best of our ability as human beings, reflects the consensus of the thousands and thousands of opinions and input we’ve heard well before we started in November 2020.”

Following the Steering Committee’s presentation, Student Senate voted nearly unanimously to endorse the new version of Reach Higher, with just one senator voting to reject and another abstaining.

“I’m just very excited and, like, happy to see the growth that has changed since August,” Krichevsky said. “I know how long (the Steering Committee) has been working on this and I just think it looks really good and I’m excited to hopefully see this come to life.”

The revised Reach Higher draft is expected to return to the UAS next week, where O’Kelly says he believes that the revisions made could be enough to get it endorsed.